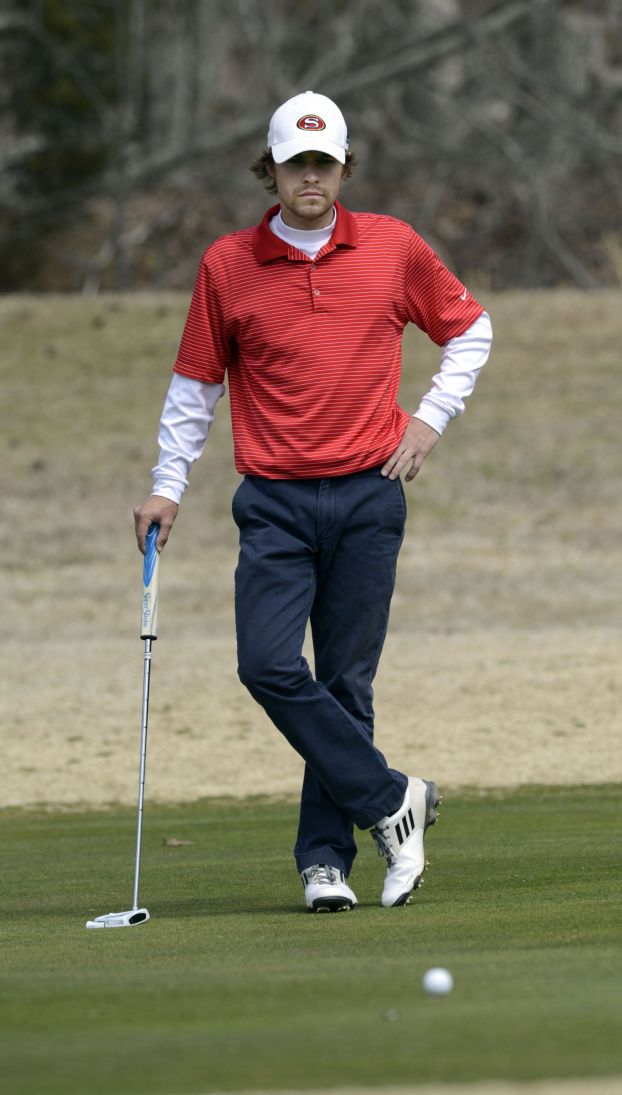 Edwards will play at George Mason

SALISBURY ­­— Salisbury senior Eric Edwards came off the course at the North Lincoln Invitational Wednesday a bit frustrated, but not defeated.
“As soon he came off the course, he said ‘I could play it again and take 10 strokes off my score,’” Salisbury coach Dale Snyder said. “It was one of those courses that if you’ve never seen it, it can be troubling.”
Golf is a humbling game even for skilled players, but Edwards has persevered time and time again. Having played since he was 7 years old at Cresent Golf Club, it all made sense Friday when the anchor of the Hornets signed to play at George Mason.
“I didn’t play well the first couple times I played,” Edwards said of his early golf memories. “I don’t remember much about it, but I did enjoy it.”
Edwards, medalist at the county championship match last month, is the latest in a long line of SHS golfers to reach the college ranks. Edwards helped the Hornets win back-to-back state 2A championships in 2011 and 2012.
“He came in with a lot of hype and he’s lived up to every bit of it,” Snyder said. “He’s one of those kids that makes us come back every day. He does the right things and has the right attitude. He’s appreciative of all the support he gets.”
Edwards came in second individually in the state championship round as a freshman and won the county championship that same year. He shot a 67 in the county match, his first time playing McCanless Golf Club.
In 2012, SHS fired a 573 in the state match at Longleaf Golf and Country Club in Southern Pines which was good enough for second all-time in the NCHSAA Tournament after 36 holes.
Last year, the Hornets won their fourth straight regional with Edwards shooting a 75 to lead the charge. Edwards finished third individually in the state tournament. On May 5, the Midwest regional will be played at Country Club of Salisbury with the Hornets going for their fifth straight region crown.
“The different types of teams that we’ve had have been a lot of fun,” Edwards said. “Some of my best friends have been on those teams.
“This year, we’re making progress and hopefully can make another regional and state championship.”
Edwards is the latest in a SHS lineage of college-worthy golfers that includes Will Collins (Virginia), Roy Dixon (UNC Greensboro), Troy Beaver (Elon), Alex Nianouris (Davidson), Alex Austin (Sandhills) and Alex Lee (Catawba)
Snyder credited Edwards for his preparation and due diligence on courses.
“I say all the time I don’t think I’ll see a better one come through and then another one comes through,” Snyder said.
George Mason, a member of the Atlantic 10 Conference, is in Fairfax, Va. Edwards says he has a good chance to play as a freshman. After visiting several schools, GM was the only school to make an offer. The Patriots participated in a tournament in Wallace, N.C., last weekend and will be in Raleigh this weekend at the Wolfpack Spring Open.
Edwards, who met with the coaching staff about two months ago, wants to major in economics.
“It’s a great academic school and that’s exactly what I was looking for,” Edwards said. “It’s a good fit for me and I’m excited for it.”

Parker going to the NBA

Jabari Parker is hoping to become Duke’s latest one-and-done star to become the No. 1 pick in the NBA draft.... read more