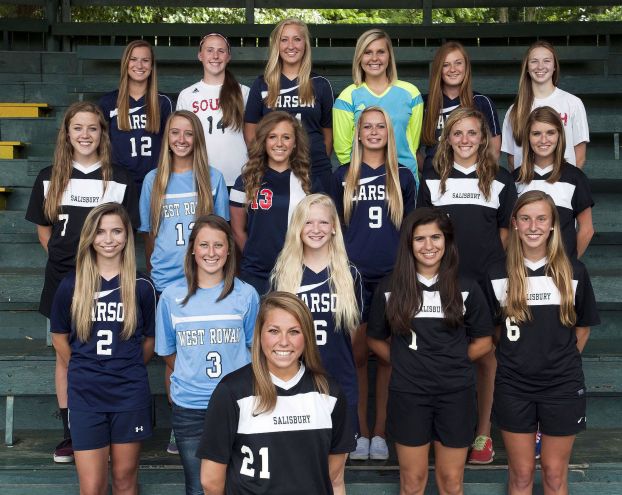 SALISBURY — It was the spring of 2011, and Salisbury soccer was on the attack against Central Davidson.
The Hornets’ star was Catawba-bound Karen Presnell, and she had a scoring opportunity. Instead of shooting, however, Presnell set up freshman Kate Grant for the first goal of her career.
Presnell could’ve scored herself, so why didn’t she? After thinking about it, a light bulb went on in Grant’s head. Presnell had realized Grant’s breakthrough goal was not only going to make Grant better, it was going to make the team better. That’s why she did what she did.
And just a week later, in a much tougher match with West Davidson, it was a confident Grant who came through with the game’s first goal.
“Kate took that first-goal lesson to heart, and she took that mantle for the rest of her career,” Salisbury coach Matt Parrish said.
Six times in her career, Grant assisted on the first varsity goal scored by a young Hornet. That tells you something about the senior chosen by the Post as the Rowan County Soccer Player of the Year.
“Kate was the consummate teammate,” Parrish said. “She took it upon herself to go out of her way to help someone else score. She never complained about my philosophy of spreading the ball and the recognition around. She still scored her goals, but usually they were big goals in big games.”
Despite looking out for everyone but herself, Grant scored 17 goals as a senior. She had 15 assists.
“Mostly to (freshman) Ceci Cardelle,” said a smiling Grant, who watched her career come full circle. “When I was a freshman, we had a great group of seniors. My senior year, we had a talented bunch of freshmen. It will be fun watching them grow.”
When she was doing her own growing up, Grant says she wasn’t easy to please.
“I had brothers that played and I liked playing with them,” she said. “But I had a late birthday, so I didn’t get started in team soccer right away. I would’ve had to play with the younger girls and I didn’t like them.”
She made friends as she got older, and she fit in on her travel and club teams. She had athletic ability, but more than that she had a soccer head. That’s what separated her when she got to high school.
“Soccer is a physical game and I could handle that part OK, but the biggest advantage I had was from growing up with the game,” Grant said. “I have an understanding of soccer. I can read the field. There are girls that are faster and girls that are bigger, but I know what needs to be done. I know how to get the ball from Point A to Point B.”
As Grant’s career unfolded at Salisbury, she retreated from forward to midfielder. That put her in position to join the attack when opportunities were there, but she also could help energize the defense when needed. Since she was a coach-on-the-field type she usually made good decisions.
A four-year starter, Grant made all-county for the first time as a junior.
She severely bruised a toe this season. It hampered her, but she played on and led Salisbury to a 15-4-1 record. The Hornets were spanked in the playoffs by Forbush, but just getting to the third round by fighting through epic wins against South Stokes and Lake Norman Charter was an accomplishment.
Grant scored the first goal against Charter, the one that let her teammates know they had a chance.
“Lake Norman Charter is the game I’ll remember because it was radically different from any other we ever played,” Grant said. “We just worked and worked and didn’t stop.”
Grant also works in the classroom. She ranks fourth in Salisbury’s graduating class.
“Keeping the grades up was a challenge,” Grant said. “After two hours of soccer practice, you’re tired and you don’t really feel like reading 30 pages of history. I muddled through it.”
She “muddled” through with a 4.0 GPA and is headed to UNC. She may play club soccer because it will be hard to leave the sport behind, but academics will be her priority. She wants to go into the medical field and dreams of joining the Peace Corps.
In her career, Grant scored 40 goals for the Hornets, eighth in the history of the program. Her 43 assists rank fifth all-time.
ggg
Grant is joined on the all-county soccer team by five teammates. Veterans Susannah Dixon and Emma Labovitz teamed with Grant on SHS teams that went 55-20-4 overall and 31-9 in the CCC. Youngsters Cardelle, Nellie Brown and Katie Bullock should keep the Hornets buzzing.
Carson, which went 14-4-1 overall and 12-3-1 in the SPC was also strong. Carson and Salisbury didn’t play, so fans can argue until next spring over who would’ve won.
Carson also has six all-county players, led by Cassie Howard, who was runner-up for player of the year. The other Cougars are Sarah Safrit, Hannah Elmore, Cierra Josey, Katie Nichols and Katie Barringer.
West Rowan had another winning season and is represented on all-county by Mariah Coleman, a Wingate signee, Josie Heglar and Claudia Patterson.
An improved South Rowan team placed Keirsten Morgan and Leslie Franks on the squad, while East Rowan’s representatives are SPC Keeper of the Year Kennedy Lambert and Kelby Porter.