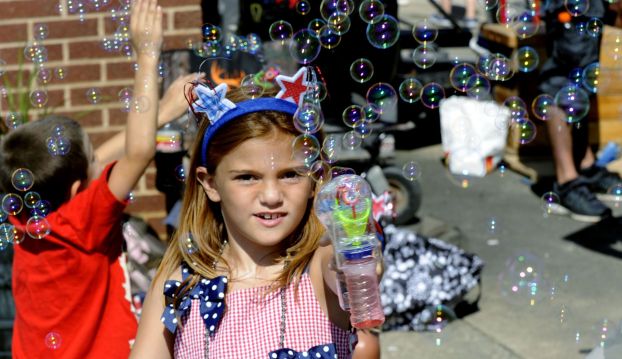 FAITH — The town’s Fourth of July celebration drew larger than normal crowds this year.
“It’s the largest crowd of people I’ve seen for the parade and the fireworks,” said Randall Barger, event chairman. “I just don’t know how to estimate these crowds.”
Barger credits the weeklong event’s success to the weather. Between cooler temperatures and Hurricane Arthur hitting the coast, people stayed in town but wanted to celebrate outside, he said.
Put on each year by Faith’s American Legion Post 327, American Legion Auxiliary Unit 327, Civitans and Jaycees, Faith’s Fourth of July celebration is a community fundraiser, Barger said.
Each year, the four groups give between $25,000 and $30,000 to 132 different charities — including scholarships for East Rowan and Carson High School graduates. Much of that money is raised over the Fourth of July week.
“We do give all that money they we raise and put it back in our communities,” he said.
Barger said he doesn’t know how much money was raised yet; the groups should know by October.
“It’ll be more than last year, that’s for sure,” he said.
Barger said there was also an overwhelming response to the canned food drive on Food Lion night, when attendees could purchase $12 ride armbands if they donated two cans of food for Rowan Helping Ministries.
He said the donations “filled the floor up of the trailer.”
Barger added that ride ticket sales were up about $35,000 from last year.
This year, the festival featured 18 rides — about half for children and half for adults.
Barger said entertainment for the week cost roughly $18,000, while the bands and fireworks cost $26,000.
Throughout the week, groups such The Embers, Southern Breeze Band and the Carolina Soul Band took the stage in Faith.
Vendors also set up in Faith all week long, and organizers hosted Faith Idol, a talent contest, once again.
Friday’s festivities included the parade of 144 floats, rides, the Faith Idol Finals, races, a watermelon eating contest, games, egg toss, a performance by Wayward Reason and fireworks.
Barger said more than 100 volunteers made the event a success.
“You’ve got so many good people,” he said.

Gabe Peeler has spent the early part of his summer traveling and working throughout western North Carolina. Six weeks ago,... read more