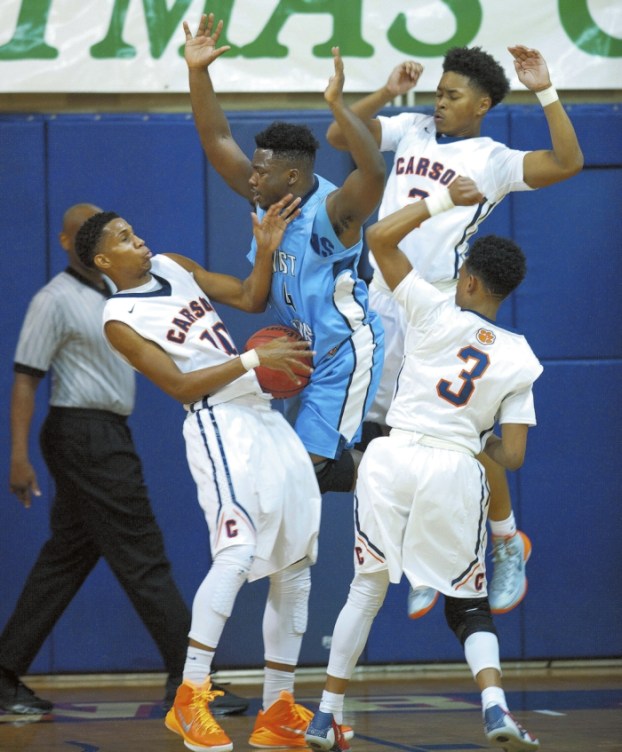 SALISBURY — West Rowan coach Mike Gurley gave credit for Saturday night’s 53-47 victory against Carson to his stylish Christmas bow tie and seniors Greg Joseph and Celexus Long — although not necessarily in that order.

“We had to Google how to put the lucky  bow tie on,” Gurley said with a grin. “But, hey, it worked. We’re in the semifinals of the Sam Moir Christmas Classic.  I think I had hair the last time that happened.”

Gurley’s had a slick head for a while, so he was just  kidding about that, but it’s true the Moir tournament hasn’t been kind to the Falcons in recent years. Their last title was in 2005 in the Jamel Carpenter days, while their last appearance in a final was 2008.

As the No. 5 seed, West Rowan (6-5)  was the highest surviving seed of the first day. When the Falcons beat  No. 4 Carson (5-6), the the top four seeds in the event were relegated to Monday consolation games. West Rowan will play No. 8 South Rowan in the late  semifinal on Monday.

“It was a fighting game, and we had to get down and dirty on defense to win it,” Gurley said. “I don’t know that we’ll win this tournament, but I do know we’ll get our defense right.”

Joseph had 18 points and nine rebounds and went 8-for-14 on free throws. A lot of those foul-line opportunities came after he pulled down a defensive board.

“This was my last Christmas tournament. “Joseph said. “I wanted to do everything I could to help my team win. Our focus was on defense and rebounding, and that’s what we won with.”

“We did a lot better job of clogging the lane against their drivers than the first time we played them,” Gurley said. “Celexus Long was a big key to that.”

It was a night when Carson’s 3-pointers rimmed out and layups were left hanging on the rim.

“It’s a county of close teams and we were really close to winning a close one,” said Carson coach Brian Perry, whose team beat West Rowan in a conference game earlier. “If one more layup falls or another free throw falls, then we’re right there, and we can just defend instead of fouling to try to catch up. It was a possession by possession game, and we didn’t value our possessions enough in the last four minutes.”

A Carson 3-point attempt by Jacob Raper that would’ve made it a one-point game missed with 10 seconds left to play.

West Rowan had a 14-0 run in the second quarter to take a 29-20 halftime lead, but Carson dominated the third quarter. It was 38-all heading to the fourth quarter.

“We got slow on our closeouts in the third quarter,” Gurley said.

Joseph and freshmen Martavio Rankin and Clint Mauldin made key free throws in the stretch run for the Falcons. Joseph hit two pressure ones with 51 seconds left, with the Falcons leading by three.

“Joseph has a nice stroke,” Gurley said. “Most teams don’t want their 4-men or 5-men to get fouled late, but we get excited when we’ve got Greg shooting free throws.”

Rankin scored 11 for the Falcons. Mauldin had eight points and 10 boards.

McCain scored 12 for the Cougars, while Raper had 10. Freshman Jamarius Hairston had 10 rebounds. McCain had five steals.

Carson moves on to a consolation game vs. top-seeded Salisbury on Monday.

SALISBURY — For weeks Bryan Withers has been telling us that his South Rowan boys basketball team is pretty good.... read more