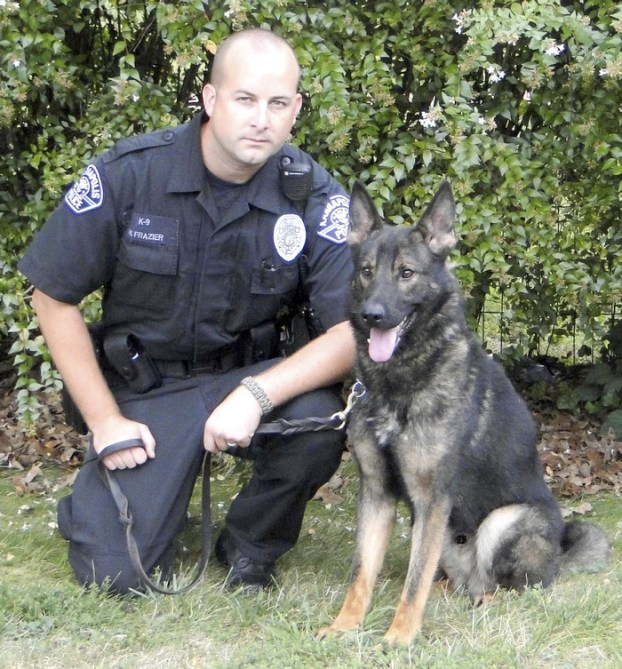 Vader has a vest

Submitted photo Officer Kannapolis Police Officer Christopher Hamilton and his dog, Vader, who now has a bullet- and stab-proof vest.

KANNAPOLIS — Two Kannapolis police dogs will be better protected on the job thanks to a donation from one of their fellow emergency responders and his wife, along with the work of a nonprofit.

Capt. John Revels of the Kannapolis Fire Department and his wife Torry provided $1,950 to buy protective vests for K9s Vader and Diesel. They came from Vested Interest in K9s Inc. in Massachusetts.

“We are very excited and grateful to Vested Interest in K9s Inc., and John and Torry Revels for this valuable gift,” Police Chief Woody Chavis said in a news release. “Our K9s are one of the most valuable tools in our tool box and a cherished part of our law enforcement family. It is wonderful to be able to reward them with this much-needed protection for their unwavering loyalty and service.”

The vests will be embroidered with “Vest donated by KFD Cpt. Revels and his wife.”

Currently the Kannapolis Police Department’s Canine Unit is made up of four dogs and their handlers. Each team must attend a six-week training course and pass a certification before working in patrol.

Each canine is trained in multiple areas such as tracking, evidence and article searches, building searches, area searches, controlled substances searches, crowd control, and the apprehension of fleeing suspects. Each canine officer is assigned to a patrol squad and performs normal patrol responsibilities, as well.

Vested Interest in K9s Inc. is a charity located in East Taunton, Mass., whose mission is to provide bullet- and stab-protective vests and other assistance to dogs of law enforcement and related agencies throughout the United States. Each vest costs $950 and has a five-year warranty. The nonprofit was established in 2009 to assist law enforcement agencies with this potentially life saving body armor for their four-legged K9 officers. Through private and corporate sponsorships, Vested Interest has provided nearly 1,300 law enforcement dogs in 40 states with protective vests since 2009 at a cost of more than $1.2 million dollars.

The organization orders the U.S.-made vests exclusively from Regency Police Supply in Hyannis, Mass., which also does the custom embroidery on the body armor. Vests are manufactured by Armor Express in Central Lake, Mich.

New K9 graduates as well as K9s with expired vests are eligible to participate. The program is open to law enforcement dogs who are U.S. employed, certified and at least 19 months of age.

For more information or to learn about volunteer opportunities, call 508-824-6978. Tax deductible donations accepted via mail to: Vested Interest in K9s, Inc. P.O. Box 9 East Taunton, MA 02718 or via the website: www.vik9s.org.

Vader is an 8-year-old Belgian Malinois. He is certified in patrol and narcotics detection as well as tracking and is assigned to Hamilton, who has been employed by the Kannapolis Police Department since March 2004. Vader was purchased from Southern Police Canines in Spring Hope. He became a member of the Kannapolis Police Department in November 2007. Hamilton and Vader have been together for seven years and completed more than 700 hours of training.  Vader loves his treats and playing hide and seek with bad guys.

Diesel is a 4-year-old German shepherd, and is certified in patrol and narcotics detection as well as tracking and is assigned to Frazier, who has been employed by the Kannapolis Police Department since 2008. Diesel was also purchased from Southern Police Canine. He became a member of the Kannapolis Police Department in November 2011. Frazier and Diesel have been together for three years and completed more than 400 hours of training. Diesel loves his Kong and anything that has to do with finding it. He has a strong desire to find illegal narcotics and has a message for all young people when it comes to trying drugs —just say no!

A Woodleaf man who authorities say has been evading law enforcement for seven years was captured in a Louisiana mobile... read more