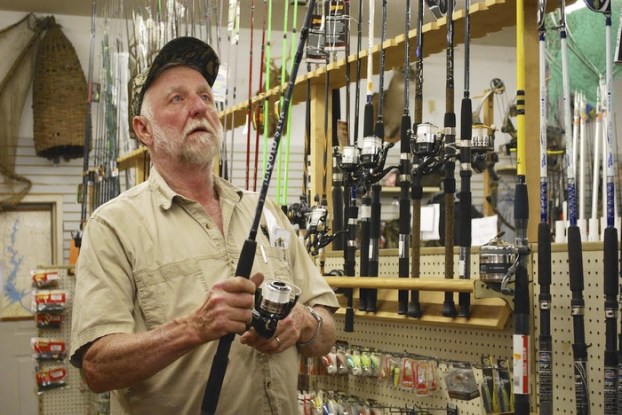 Terry Hill, second generation owner of Hill's Minnow Farm, tests a fishing rod in his store. Hill's Minnow Farm sells fishing and hunting gear, along with a little bit of everything. This year, the business celebrates its 50th anniversary. 'In 1965, my daddy set up under a shed with some cast iron bath tubs and started selling minners,' says Terry of his father, Raymond Hill. Elizabeth Roy/For the Salisbury Post

As the waters of High Rock Lake heat up due to longer days and spring weather, local fishing is also about to get hot. Warmer waters incite the spawn of the crappie fish population, draw the crappie into shallower beds, and bring on their biting season.

And for the Hill family and their Hill’s Minnow Farm customers, crappie biting season means that it’s time for the annual Crappie Roundup.

This year a total of 722 crappie are being caught, tagged, and re-entered into the Rowan County side of High Rock Lake as part of Hill’s Minnow Farm’s Crappie Roundup, with prize money assigned to each of the fish. All you have to do is pay $8 for your entrance fee and bring the live, tagged crappie into the store, and you may be the lucky recipient of as much as $4,000.

“We want ‘em to get caught,” says Terry Hill, Hill’s Minnow Farm owner. The purpose of the 70-day tournament – running March 21 through May 30 – is not to make money, Terry says. Rather, the idea is to get people out fishing.

“Most people don’t buy their tickets until the first weekend they go fishing,” says Terry, who typically sells between 1,200 and 1,400 tickets each tournament, and has sold several hundred so far this year.

Anyone who catches a tournament crappie gets their photo posted on a bulletin board to the left of the store entrance. And with just one tagged fish having been caught so far this year, there are plenty of tagged crappie remaining in the lake, ripe for the picking.

This year marks the 18th year for the tournament, and the 50th anniversary of the Hill’s Minnow Farm operation.

“In 1965, my daddy set up under a shed with some cast iron bath tubs and started selling minners,” says Terry of his father, Raymond Hill.

The minnow business expanded to other baits, then to a full structure with tanks for the fish, and later in 1989 – when Terry took over the business – to the store that exists today.

“We just keep growing,” says Terry of the store which has continued to expand, and is now accompanied by a separate seven-tank facility behind the store as well as a 60 x 60 warehouse for the Hill’s Minnow Farm trademark wholesale products.

Inside Hill’s Minnow Farm, you can find everything from grocery items to night crawlers to hunting gear. They are open seven days a week, from 5:30 a.m. to 10 p.m.

“When I first opened the door, I wanted to be a hunting and fishing store and that’s it,” says Terry. “But the first eight people came in wanting bread and milk. So I learned pretty quick.”

Hill’s also sells ethanol-free gasoline, a big draw for boaters. Boat engines don’t run well with ethanol-infused gas, and Hill’s Minnow Farm is one of a handful of places in the county that sells the ethanol-free gas, Terry says.

“And that’s counting them by hand,” says Terry. “When it gets busy we’ll have three registers running and two people counting minners.”

Terry and his wife, Susan, have two daughters, Lisa and Mary. Lisa Hill, 25, works full time for her father and grew up with the store — its new location literally opened within days of her birth.

“I’ve always felt like the store is my front porch, a part of my home,” says Lisa. “For me, it’s about continuing what my grandfather started.”

Lisa’s grandfather, Raymond Hill, passed away in 2007, but lives on through his Hill’s Minnow Farm legacy, Terry says. And the most prized fish of the Crappie Roundup, “Rustlin’ Raymond,” is named in Raymond’s honor.

Other names of the fish in the Roundup are Sassy Susan, Hillbilly Mary, and Minner Countin’ Lisa, all members of the Hill family. The 42 local businesses sponsoring the event each pick their own crappie names as well – anything from Howlin’ Howard to Brush Pile Butch.

Not only are the crappie fun to catch and potentially prize-worthy, but they are tasty, too.

“Crappies are real good. I like them better than just about any fresh-water fish,” says Terry.

Crappie fishing has been slower the past two years, but already this year Hill’s Minnow Farm is seeing more – and bigger – crappie coming in, Terry says. To encourage this trend, fishing authorities will remove the 8-inch size limit and 20-crappie per day limit starting Aug. 1 of this year.

“The lake is overstocked, and the fish can’t grow,” Terry explains.

If it’s warm and sunny on Easter weekend, Terry anticipates that it will be a booming several days for fishermen. Warm weather brings out more than just the fish.

And chances are, some of those fishermen will stroll into Hill’s Minnow Farm and ask: “Are the fish biting?”

In Raymond’s day, he would answer the question every time with a “Yup,” Terry recalls. And every now and again, a customer would come back in after a goose-egg day on the lake and complain to Raymond, “What do you mean they’re biting? I got nothing.”

To this, old Raymond would respond without fail: “Well, they’re biting somewhere.”

And if the crappie are biting, the Crappie Roundup is a great time to catch one.

Local Scout Joseph Dufour holds nothing back in taking on a major task to help Saving Grace Therapeutic Programs for... read more