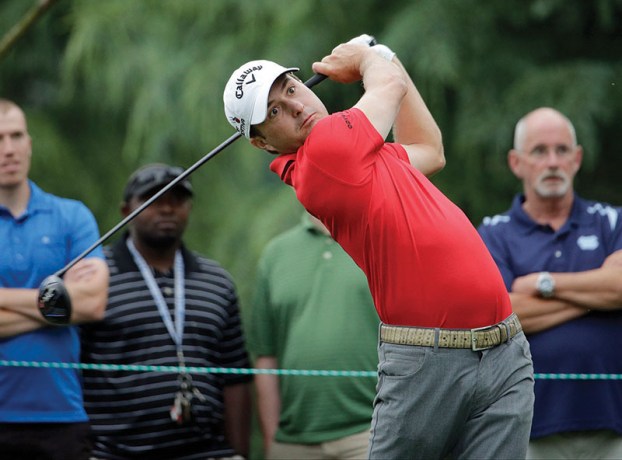 The Associated Press Kevin Kisner watches his tee shot on the 11th hole Friday during the second round of the Wells Fargo Championship at Quail Hollow Club in Charlotte. This is Kisner's third straight week on the road for a tournament. When he tees it up Thursday at the Crowne Plaza Invitational, it will be his sixth event in the last eight weeks.

Golf: Kisner staying on the grind

After walking off course Sunday at Quail Hollow Club, there is only one place Kevin Kisner wanted to go.

“A night at home is going to be nice,” he said after his round. “I’m just going to go home and recharge and go out to Fort Worth for the Colonial. Just get rejuvenated and hang out with the fam a little bit tonight.”

The four-year PGA Tour veteran had just finished tied for the 38th at the Wells Fargo Championship. He shot a 1-under 71 on the last day, including seven pars in the last eight holes.

It was the end of a long week coming on the heels of a long week. Kisner went the distance at the Players Championship, coming out on the losing end of a playoff with eventual champion Rickie Fowler and Sergio Garcia.

“I got a little fatigued there at the end,” Kisner said. “It’s just been a long couple of weeks, but you know I’m still playing solid. I gave myself a lot of chances to shoot low today. I just didn’t pull it off over on the back nine.

“It was another good week and just keep building on it, working on the things I’m working on and keep improving.”

It was just one more tournament in a grueling stretch for the University of Georgia product. Kisner has played in six of the last eight tournaments. He’s missed only one cut and lost in two playoffs, the first being to Jim Furyk at the RBC Heritage Classic at Hilton Head Island, South Carolina.

He’s back at it again this week. Kisner tees it up at 7:22 a.m. CT Thursday for the first round of the Crowne Plaza Invitational at Colonial in Fort Worth, Texas. Also on his schedule is the Memorial Tournament presented by Nationwide, which is the first weekend in June.

It’s what he has to do right now as he works to move into the top 60 in the Official World Golf Ranking. He currently ranks 63rd, three spots and less than one-tenth of a point behind former world No. 1 Luke Donald. If Kisner climbs over the three players ahead of him, he gains an automatic exemption into June’s U.S. Open.

“Hopefully, I get into that without having to qualify and then be able to go out there early and prepare,” Kisner said.

He plans to work on the draw ahead of the U.S. Open because a lot of holes at Chambers Bay call for the left-to-right shot. It’s they type of shot he said he struggled with down the stretch at Quail Hollow.

While doing that, he’s still searching for his first career win. Though he’s not feeling the weight of that at all.

“I know how hard it is to win out here,” Kisner said. “If I keep putting myself in those positions I’ll win one soon enough.”

From staff reports Asheville’s Forrest Wall hit a pair of home runs to power the Tourists to a 7-3 win... read more