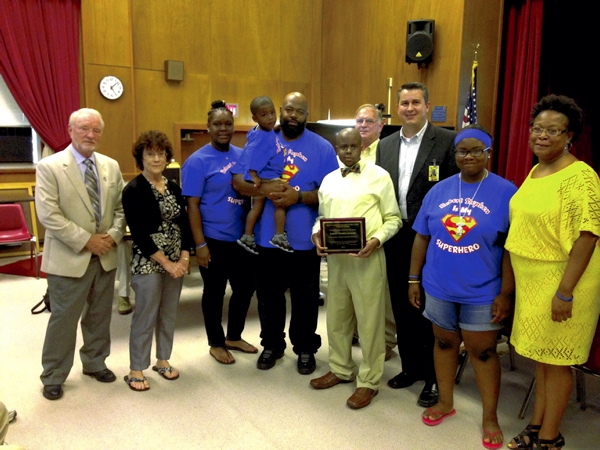 Robert Stephen Gilmore, a student at Salisbury High School, with his family and school board members after receiving the first ever "Courage Award." Gilmore is in his third battle with cancer.

Staff report
The Rowan-Salisbury Board of Education presented its first ever “Courage Award” Tuesday to a Salisbury High School student battling cancer for the third time.
Robert Stephen Gilmore accepted the award, created in his honor, from board Vice Chairman Dean Hunter while dozens of his friends and family, wearing T-shirts with the Superman logo that read “Robert Stephen is my hero,” looked on.
Gilmore, 18, is the son of Wendy Baskins and Travis Hairston. He will be a senior in school in the fall. He defeated a brain tumor when he was 3. When he was 15, it was colon cancer. In May, doctors found the colon cancer had returned. Gilmore has gone through two rounds of chemotherapy since the diagnosis.
Gilmore’s fellow students at Salisbury High named him prom king this year.
Baskins said her son is a child of faith. After the diagnosis in May, doctors gave Gilmore six to eight months to live, but Baskins said he looks 100 percent better now then he did when he was first diagnosed.
The plaque Gilmore received had a quote from Nelson Mandela inscribed in it. The quote reads, “I learned that courage was not the absence of fear, but the triumph over it. The brave man is not he who does not feel afraid, but he who conquers that fear.”
Hunter thanked Gilmore for being an example of courage to his friends, family and all of us.
The family is selling T-shirts and wristbands to raise money to help pay medical expenses and assist the family. Contact Baskins at 704-267-6054 for more information on how to help.
You Might Like

Mortgage rates ticking up, but still a good time to buy a home

By David Purtell david.purtell@salisburypost.com Mortgage rates have been going up this year, but mortgage lenders say the current climate in... read more