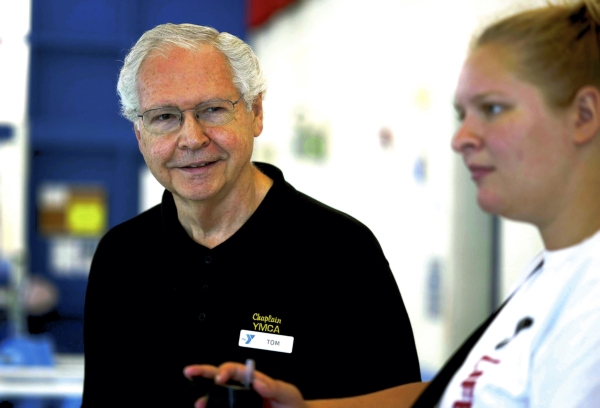 JON C. LAKEY / SALISBURY POST The J.F. Hurley YMCA has recently started a chaplaincy program which will allow members and staff to have access to on site chaplain. Thomas Teichroew will be on site to fill the new role. Teichroew stops to talk with on duty life guard Marissa Goho.

Always there, watching for trouble, ready to come to someone’s aid. You might think it a bit odd that Tom Tiechroew is a lifeguard and a chaplain.

Truth is, he sees a lot of similarities in the two positions. He’s always there, watching for trouble, and ready to come to someone’s aid when the need arises.

It’s also a lot like being a sheepdog, he says. “I hang around the perimeter of the flock and keep my eyes open. Chaplains are kind of the spiritual first aid for people. The goal is to bring people back to the flock.”

Tiechroew (pronounced tie-crow) is a local pastor and police chaplain who’s serving as the first chaplain for the J.F. Hurley Family Y. He’s there to offer prayer and advice, both to staff members — of which there are more than 100 — and Y members alike.

Chaplains don’t take the place of parish pastors, but instead work alongside them to reach those not connected to a congregation. After all, Tiechroew says, some 53.5 percent of Rowan County residents do not have a church.

“It’s a great opportunity for staff to reach out to someone for guidance,” says Richard Reinholz, the Hurley Y’s executive director. “It’s not meant to replace a pastor or a preacher.”

“We have a small church,” he says. “I just believe in bi-vocational work.”

He works about three hours a day, three days at week as a lifeguard at the Y. It’s something that was on his bucket list after he turned 70, following a fight with cancer. Swimming helped him get his strength back, and eventually he decided to take the lifeguard test.

This spring, he approached Jamie Morgan, the Y’s CEO, about a chaplaincy program.

“It’s just an opportunity to give staff and members another resource,” Morgan says. “If you need somebody to talk to, he’s that resource. This program is tied into our Christian mission. This is just another way we can reach out to our staff and members.”

“It is used, but it is not highly used,” Reinholz says of the cozy space. “It’s a good place for Tom.”

Each week, Tiechroew posts a Bible passage for discussion. On this particular day, it’s from Isaiah 61: “The spirit of the Lord is upon me, because the Lord has anointed me; he has sent me to bring good news to the oppressed, to bind up the brokenhearted, to proclaim liberty to the captives, and release the prisoners; to proclaim the year of the Lord’s favor.”

Tiechroew points out these verses resurface in Luke 4:18-19, spoken by Jesus.

“To understand the Bible, get to know people in the Bible,” he says.

Just like he’s getting to know people at the Hurley Y.

“This is a great place to be a chaplain,” Tiechroew says. “This is a place that’s open to the hand of the Lord being at work.”

My good friend Davey Overcash came across a stash of newspapers his mother had saved since the 1950s, a couple... read more