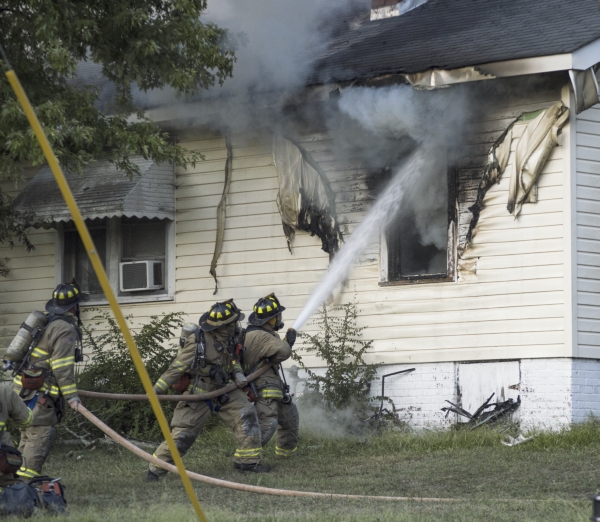 Josh Bergeron / Salisbury Post - Firefighters douse a fire at 522 Grove Street in Salisbury. Two men and two dogs were at the house when the fire started. Neither the men nor the dogs were injured in the blaze.

A fire that drew dozens of emergency personnel on Monday ripped through a Grove Street residence and displaced three brothers.

No one was was hurt in the fire, which started just before 7:50 p.m. Sidney Nicol, one of the three brothers living in the house, said the fire was intentionally set. Salisbury Fire Department Battalion Chief David Morris couldn’t immediately confirm or deny the fire was caused by arson. Morris said the cause is officially still under investigation.

As firefighters raced to the scene, a thick plume of grey smoke billowed from the house at 522 Grove Street. It could be seen for several blocks, and drew a crowd of onlookers.

Morris said the fire was mostly focused in the front portion of the house. It extended into the attic, he said.

In addition to firefighters on the ground, a group also climbed onto the roof and cut a hole in the structure to allow heat to escape.

Morris said the building appeared structurally intact, except for portions of the front.

Nicol, 25, arrived as firefighters were getting the fire under control and spoke with his brothers. He said one of his brothers was locked in the bathroom when the fire started. Another brother was locked out of the house, Nicol said.

The American Red Cross was called to help the three brothers.

Morris said the quick work and training of firefighters helped stop the blaze.

“The structure was super-heated and full of smoke and our crews did a great job of getting the fire under control quickly,” Morris said.

He said summer heat can make fires more dangerous than they would be otherwise.

David Freeze: The last day of this special journey