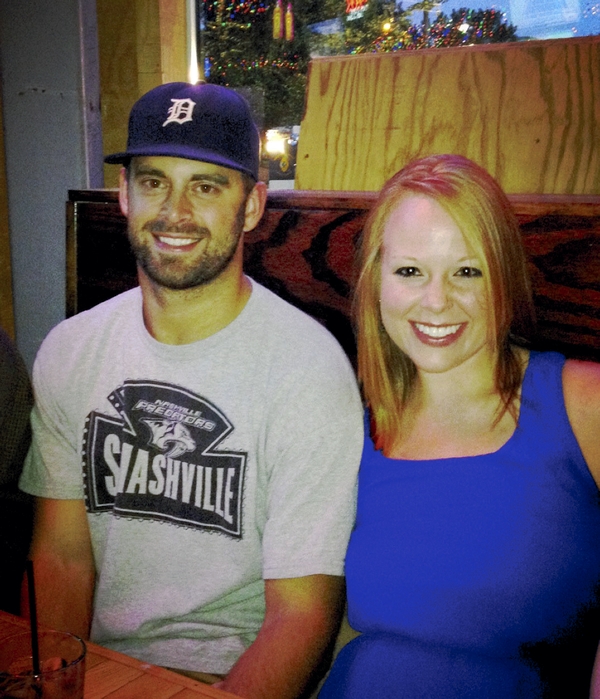 Caleb Hamby and Bethany Davidson are pictured together in September 2014, before Hamby's diagnosis. Submitted.

Bethany Davidson and her fiancé, Caleb Hanby, are planning their dream wedding thanks to a thoughtful friend and a radio station contest.

Earlier this week, Davidson and Hanby eagerly tuned into Nashville’s 103.3 America’s Morning Show hoping for the call that would open up possibilities they never could have dreamed of for their big day.

The call came, and the couple learned they were selected out of nearly 7,500 contestants to win a $100,000 wedding.

Hanby proposed to Davidson on a romantic hot air balloon ride on Aug. 3 and ever since then, the couple has been planning their wedding on a tight budget and a limited timetable.

One year ago, Hanby was diagnosed with a rare cancer in the connective tissue of his jaw, and all of the couple’s money is spent on medical care, bills, gas to drive to the hospital and groceries. Even though Davidson works two jobs, they still have more bills than they can pay.

While researching wedding venues for the couple, Davidson’s friend, Brittany Woodard, saw an advertisement for the contest. She wrote an essay about her friends’ love story and entered them in the contest.

The event will be held at the East Ivy Mansion in Nashville, Tennessee, and the couple is utilizing the services of a celebrity wedding planner. Up and coming country artist Michael Ray will sing their first dance song and a Rolling Stones Magazine photographer will capture their big day. Davidson’s wedding dress and veil will be custom made for her, and Carrie Underwood’s hair and makeup artist will do her and her bridesmaids’ hair and makeup.

“This experience is going to bring so much joy to both of us,” Davidson said, but added, “It’s hard to be fully excited about everything. The big matter at hand is still that Caleb is sick.”

Davidson, daughter of Salisbury Post Sports Editor Dennis Davidson and Toni Davidson, moved from Salisbury to Nashville in August 2013 to be a nanny for a family there. Two months later, she began working at Prairie Life Fitness as a manager. In February 2014, Hanby joined the gym’s staff as a personal trainer.

After four or five months, however, Hanby joined Davidson and a group of coworkers on a night out for her July birthday.

“There was a spark,” she said. “We’ve been inseparable ever since.”

The pair officially began dating in in August, and in September, Hanby began experiencing some pain in a tooth in his lower left jaw. He went to the doctor, who initially diagnosed him with TMJ. In October, however, his diagnosis was changed to alveorlar rhabdomyo sarcoma – a rare cancer that primarily manifests itself in children.

“It’s very rare,” Davidson said, adding that Hanby’s case is even more unusual because he was diagnosed at the age of 27.

At first, “things were shrinking and going well,” Davidson said.

After Hanby’s first round of chemotherapy and radiation, he got extremely sick from the radiation treatments.

“The tumors were not reacting to traditional chemo regiments,” Davidson said.

Davidson said proton therapy is “one of the newest advanced cancer treatments” and only five facilities in the nation offer the treatment. The closest one was in Knoxville, Tennessee, and the doctor said he “felt confident that he can shrink Caleb’s tumor pretty well.”

By shrinking the tumor, the doctor hopes to get it small enough that the chemotherapy can take care of the rest.

“Before, the chemo couldn’t keep up with the growth of the tumor,” Davidson said.

She said Hanby has his good days and his bad days and that he’s often fatigued.

He’s lost 75 pounds since he was diagnosed, but recently, was able to gain back 13 of those pounds.

She said she never realized how difficult it would be, but she also didn’t realize how close it would bring them together.

“I never once thought about walking away or leaving him,” she said. “That’s something that has been so amazing to me from the beginning.”

Davidson said her family and a few friends have been very supportive from the beginning.

“I did have a lot of people tell me to think it through,” she said. “I just never let those emotions ever cross my mind.”

“I instantly knew how much he meant to me and how much I loved him,” she said.

Rowan-Salisbury names teacher and principal of the year