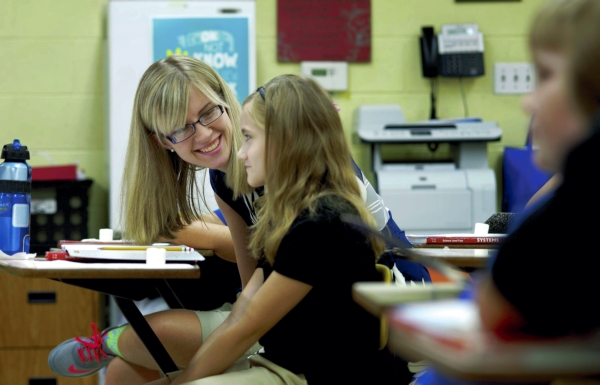 North Hills Christian School Lower School Principal Kristen Sabia talks with Carlee Latva during class on Tuesday. Sabia has taken on the new role of Lower School principal at North Hills and likes to be in the classrooms to mantain a closer relationship with staff and students. Sabia had been a second grade teacher at North Hills for five years and attended the school from kindergarten through 12th grade. Jon C. Lakey/Salisbury Post It’s been 22 years since Kristen Sabia first walked in the doors of North Hills Christian School as a kindergartener. Now, as the school’s first ever lower school principal, it’s still a place she calls home.

Sabia, who attended North Hills from kindergarten through 12th grade, said she’s wanted to be an educator since she was 4 years old. “I used to play school and do lesson plans with my parents.”

“My teachers here were definitely my inspiration to want to become a teacher,” Sabia said, adding that in middle and high school, her teachers helped guide her along the best path to follow her dreams.

As graduation approached, she began looking into schools with teacher education programs.

“I wanted to stay local,” she said, explaining that her parents, Joe and Ann Collins, were getting older.

“Once I did the research, I found out they (Catawba College) had a great teacher education program,” Sabia said.

During her four years at Catawba, Sabia was constantly visiting and volunteering in local schools, getting exposure to all grade levels.

“I was pretty sure I wanted to do elementary,” she said, adding that her time at various schools confirmed that to her.

“During that time, I really felt God calling me back to North Hills,” Sabia said.

During the spring semester of her senior year, Sabia was recruited to return to North Hills to work part-time as a teacher assistant. That summer, a second grade teaching position opened up, and she began teaching in her own classroom that fall.

“It was very comfortable,” Sabia said. “It was a very easy fit.”

She said it was important for her to be able to teach in a Christian school where she could share her faith with her students.

“I love that the students are excited to learn,” she said. “I like to see their hearts and their minds grow.”

During her years as both a student and a teacher, Sabia said she’s “definitely seen a lot of change,” from administration to faculty to facilities.

Over the past few years, North Hills has grown rapidly, and has surpassed 300 students.

In the past, the dean of academics has handled the school’s curriculum and discipline side of things, essentially serving as a principal under a different title.

As North Hills grew, Dean of Academics Leslie Pullen was pulled in many different directions and needed assistance to effectively lead the school. So, the lower school principal position was created. Pullen is continuing in her position, which has been retitled as upper school principal.

Sabia said she and her fellow elementary school teachers were “thrilled” when they found out they would have a leader on their “side of the parking lot.”

At first Sabia didn’t even consider applying for the position, but she was encouraged to apply.

“It was an opportunity I wasn’t expecting,” she said, but added that “after much prayer and consideration,” she applied for the job.

Sabia said that throughout the hiring process she prayed that “the right person” would get the job.

She didn’t expect that she would be that right person, but was excited when she received the job offer.

Sabia said she has a new understanding and appreciation for all the behind-the-scenes details you don’t see as a student or a teacher.

“I love every part of the job,” she said.

Pullen and lead elementary teacher Susan Colosanti have been mentoring Sabia since she took the position at the beginning of the summer.

Sabia said she’s always known that she liked working with people, but she was always more comfortable with children.

“What I’m learning is that I like to work with adults, too,” she said.

Sabia spent much of the first week observing and getting to know the teachers and students better.

Although she misses her second grade classroom, she said she still gets to peek her head in there from time to time.

“I still get to be involved in second grade, which is nice,” she said.

Sabia said this position is already opening up endless possibilities.

“I was happy in the classroom,” she said. “Six months ago, I was going to be a teacher for the rest of my life. Now, I have no idea.”