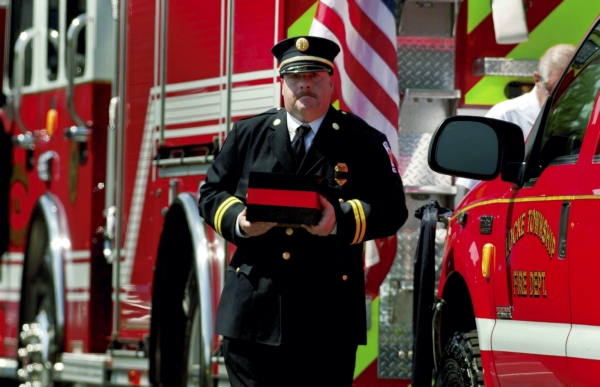 Michael Everhart carries the ashes of friend and fellow firefighter Lt. Chris Phillips. Phillips, who suffered a heart attack last week just hours after responding to a fatal wreck in western Rowan County, was remembered on Tuesday with a memorial service at Omwake-Dearborn Chapel at Catawba College, preceded by a 2-mile-long procession through Rowan. Jon C. Lakey/Salisbury Post Fire service personal salute as the remains of the Lt. Chris Phillips, a firefighter for the Locke and Churchland Fire Departments, are carried into a memorial service at Omwake-Dearborn Chapel. Jon C. Lakey/Salisbury Post

The sentiment most often heard Tuesday about Lt. Chris Phillips was that firefighting was his lifelong dream. His dream was fulfilled, but his life was cut short a week ago when he died of an apparent heart attack following a vehicle crash he’d responded to with Locke Fire Department.

The memorial procession for Phillips, a veteran firefighter of over 20 years, began at the Churchland Fire Department, where he spent the majority of his career, and was over 2 miles long. He was an assistant fire chief at the Linwood-based fire department before joining the Locke Fire Department in July.

Phillips responded with Locke Fire Department Thursday to a single-vehicle crash in the western part of the county, and sometime in the early morning hours the next day had what fire officials have said was a “cardiac event.” Emergency responders were unable to revive Phillips.

As the procession Tuesday crossed into Rowan County and eventually through Salisbury, a Churchland Fire truck led the way underneath a large flag hanging from two ladder trucks positioned near Mahaley Avenue and Statesville Boulevard. As the fire trucks headed into the circular driveway of the chapel parking lot, firefighter Drew Barkley could be heard inside playing the bagpipes.

Firefighter and emergency medical technician Terri Welch said that although she never had the opportunity to work a shift with Phillips, his presence was still felt at the Locke Fire Department.

“We were certainly so proud to have him. He was so well liked, and he was such an asset to our department,” Welch said.

She said Phillips was getting to work in a field that was a lifelong dream.

“There’s no better service to mankind than in the fire service,” she said.

Lexington Fire Chief Phillip Hartley worked with Chris Phillips while he was a firefighter with the city. Phillips began with the department in 1996 and worked for 11 years there.

“There was never a dull moment, and he was probably the most dedicated firefighter I know. He loved to help people. He was living his dream,” Hartley said.

Leslie Stopper, a co-worker of Phillips’ wife Elisabeth, said she had to attend the memorial service to pay respects to Elisabeth who is like a sister to the whole staff. The two work together at Salisbury Salon & Spa.

“We wanted to support her and her family and her baby. We love her like she’s family,” Stopper said.

Locke Fire Chief Rusty Alexander said with all of the departments near and far, it just shows the brotherhood amongst the fire organizations and others who wanted to honor a man who was a “great leader in the fire service.”

The Rev. Randy Foster said during the memorial service that Phillips accomplished more in the short time he lived than someone who was twice his age.

“He did not serve as a firefighter as a career. He did it as a calling,” Foster said.

“His was a life well lived,” he said.

City, county to Little Leaguers: ‘Thank you from the bottom of our hearts’

Mark Wineka mark.wineka@salisburypost.com SALISBURY — They hit. They pitched. They defended. They showed grace, sportsmanship and generosity. They put us... read more