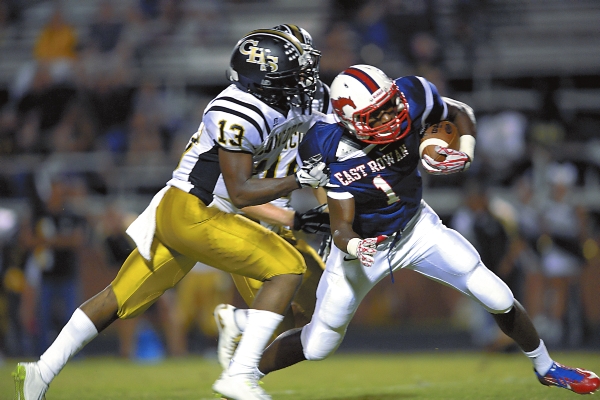 Wayne Hinshaw, for the Salisbury Post ... East Rowan’s Naquis Caldwell (1) breaks loose from Concord’s Davionne Eddie (13) after catching a pass. Caldwell went on into the end zone for a touchdown.

Concord too much for East Rowan

GRANITE QUARRY — East Rowan showed some flashes of brilliance Friday night but ultimately they had no answer for the speed and athletic versatility of Concord’s Keenan Black.

Black, the Spider’s senior quarterback, shredded the Mustang defense for 292 yards of total offense, produced four touchdowns and led his team to a 49-28 win in the South Piedmont Conference opener for both. The contest turned into a three-hour marathon after a delayed start due to storms, 25 penalties, two ejections, a couple of serious injuries and a wide-open passing attack by both teams.

The Mustangs (1-2, 0-1 SPC) got its own stellar performances from quarterback Max Wall and wide receiver Naquis Caldwell but an early 21-0 deficit, plus the elusive skills of Black, kept East from any chance of beating Coach Kenneth McClamrock’s old alma mater.

A 6-3, 185-pound speedster, Black passed for 192 yards and three touchdowns while also rushing for 100 yards and another score for the Spiders (2-1, 1-0 SPC), showing that Concord is not quite ready to give up the SPC top dog position they have held for the past two seasons.

“I just took what the defense gave me tonight,” Black said while noting he passed the ball a lot more in this game than their previous two. “It all starts with my offensive line and they did a heck of a job tonight. We are all starting to jell but we have a long way to go.”

East Rowan made life a lot easier for the Spiders in the early going when they yielded an interception, a fumble and a failed fourth down conversion in their first three possessions. Wall, starting his second game at quarterback with an injury to regular Tate Houpe, had a remarkable night with 162 yards rushing and 192 yards passing, but he also was picked off three times, including twice in the decisive second quarter.

Concord’s Cam Blackwelder intercepted Wall on the first Mustang possession leading to a 64-yard scoring drive. Black found receiver Carter Mozingo open on a screen and the senior speedster broke free for a 29-yard score and a quick 6-0 lead. After holding the Mustangs on downs late in the first quarter, the Spiders embarked on another lengthy drive capped by another Black TD pass, this one to Ethan Wilder, making the score 14-0 after Black hit Drew Yoos for the two point conversion.

The dagger play came just 22 seconds later when Wall threw into the right flat and Spider defender Justin Nicholson snatched it in full stride and raced 54 yards for the pick-six. Just like that, Concord led 21-0 early in the second quarter.

The Wall-to-Naquis Caldwell combination enabled East to get back into the game for a while. First, the senior Caldwell caught a pass over the middle then bowled over two defender enroute to a 52-yard scoring play. After Concord answered with a a 55-yard drive and a short PJ Hall touchdown, East cut the margin to 28-15 at 4:18 before the half. Wall put it up for grabs in the end zone with Caldwell covered by two defenders. But Caldwell out jumped them all and came down with the 36-yard scoring pass. It was his fifth scoring reception of the season.

“I believe I can catch anything if it is near me,” Caldwell said. “That is my job. But Concord is a very good team so we will just have to stay positive, overcome adversity and come back Monday ready to work.”

Concord added another score right before the half on a Black pass to his tight end Yoos over the middle for an 11-yard score, making it 34-15 at intermission. The Spiders iced it with a pair of scores in the third period while shutting down the Mustang offense. Black scored on a three-yard on fourth down to cap a 13-play drive. They made it 49-15 on their next possession when Mozingo reversed his field on an end around and scored from the 20.

Wall salvaged some pride for his team in the final quarter with a pair of impressive touchdown runs. He cut across the middle and got behind a wall of blockers for a 74-yard touchdown run with 6:37 left, then closed out the game with an 11-yard TD run as the clock ran out.

Spider head coach Glenn Padgett was pleased with his team’s overall effort but was not very happy with a whopping 18 penalties for 159 yards. “We are happy to be where we are but obviously we have a lot to work on.” he said. “Our effort was great but I was disappointed in all those penalties plus some mental and emotional breakdowns.”

Concord will take on Hickory Ridge next week while the Mustangs will try to bounce back with a key SPC game at Cox Mill next Friday.

By Mike London mike.london@salisburypost.com ROCKWELL — William Yates is 76 years old, but the man who once scored five touchdowns... read more