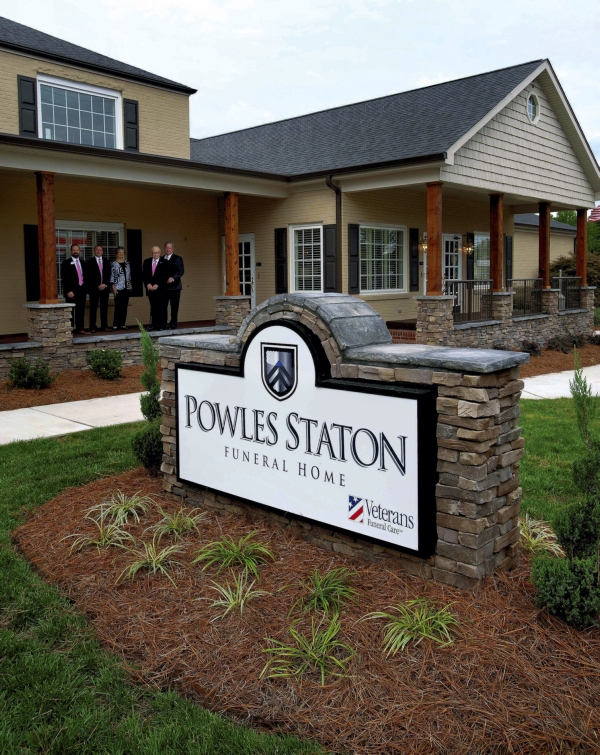 JON C. LAKEY / SALISBURY POST The longtime Powles Funeral Home in Rockwell has recently finished their renovations with many upgrades including a name change. The Staton family name has been added to the business name. Thursday, September 24, 2015, in Rockwell, N.C.

What: The public is invited to an open house at the funeral home to see its extensive renovations.

Prize offered: A $750 Carnival Cruise gift card will be awarded to one of the grand reopening visitors.

ROCKWELL — For a funeral home that has served the community since 1933, it might seem unusual to be talking about a fresh start, but Powles Staton Funeral Home has gone through that kind of transformation.

Outside, it starts with a new sign and new name. As announced back in August, Powles Funeral Home is now Powles Staton Funeral Home, finally reflecting the Staton family who has owned and operated the business since 1968.

The exterior has new landscaping, new concrete walks and a portico on the side that’s double the size of the old one. The front porch has a softer, less institutional feel with its new railings and solid cedar posts on stacked stones.

Inside, the changes are even more dramatic. Though the 14,000-square-foot building retains it same footprint, the Statons have created a new visitation area, arrangement room, bathrooms and a comfortable, patriotic-themed coffee room with an adjoining kitchen.

The chapel has been modernized with remote-controlled video cameras and projection screens, which allow services to be much more personalized. Someone on the other side of the country who might not be able to attend the funeral of a loved one in person can watch the service through a live feed or receive a DVD of the service later.

Television screens throughout the main floor are linked to each other. Furniture that seemed to have a 1960s living room vibe was replaced, and don’t expect dark and dreary when you walk into Powles Staton.

The Statons brightened the visitation and arrangements rooms by installing windows on the back side of the building. The walls and ceilings throughout the main floor are white, bright and light, thanks to fresh coats of paint.

Steve Staton oversaw the building’s previous renovation in 1991-92. “I’ve been through one,” he says. Steve also wanted the changes to reflect a changing of the guard at the funeral home: “It was time to put these things in action,” he says.

So Steve Staton left much of the details on this renovation to his sons, Matt and Will.

“Matt and I wanted to make a statement,” Will adds.

The brothers received valuable input from an architect who specializes in funeral homes. Fellow funeral director Russ Roakes and the rest of the Powles Staton staff also contributed their thoughts.

In the end, Crescent Construction carried out the plans. Will’s wife, Charlotte Staton, helped with the interior designing.

That old arrangement room with all the caskets could be overwhelming and emotional for families who were still early in their grieving process.

The new, brighter area is a modular selection room, where cutouts, or corner caskets, are on the wall in a nice display, much like appliances. Given similar display are the sample cloths for the interior of the caskets and sectional representations of burial vaults.

A conference table sits in the middle, and the tough chores of picking out a casket, vault, registration book, cremation urn and, in some cases, even dresses or suits for the deceased, are easier.

“It’s just better for the families who come in,” Matt Staton says.

The other half of the former visitation area is the coffee room, where people who run into old friends at a visitation can easily drop in and be away from the visitation line. The adjoining kitchen, which has a small sink, refrigerator, cabinets and two long counters, is ideal for families or other groups to bring in reception-type foods.

At first, the Statons thought they should provide a big kitchen, capable of serving catered meals, but they realized in this part of the country, churches often fill that role of serving up meals for the grieving families.

Roakes emphasizes the funeral home’s coffee room isn’t meant only for people attending a funeral service or visitation. The room, which is located directly off the front lobby, is open to church groups, civic clubs and businesses. Hospice staff members met in the room on a recent Monday morning for breakfast and a tour of the refurbished Powles Staton Funeral Home.

The coffee room strongly reflects Powles Staton’s membership in Veterans Funeral Care. Powles Staton has receptacles in several places throughout the county that accept worn, used flags, which in turn are burned in any cremations of veterans.

The room is decorated with framed U.S. and Marine Corps flags and posters signifying Operation Toy Soldier and the President’s Award Powles Staton won this year from Veterans Funeral Care.

In June, Roakes accepted that award in Clearwater, Fla., on the funeral home’s behalf.

The TLC group meets the third Wednesday of each month, and it offers lunch, speakers and field trips. “That has been a great outreach for the community,” Roakes said.

The bingo mornings at McDonald’s are offered on the fourth Wednesday of each month from January to October. Upwards of 50 to 55 people usually show up, Roakes says. His mother-in-law, Wanda Kluttz, started both programs.

Powles Funeral Home was established in 1933, when L. Council Powles purchased the business from W.R. Ridenhour and moved the facility from Depot Street to Main Street. In 1936, Powles built a new facility on West Main Street at its present location.

Powles and his wife, Reba, operated the funeral home for 35 years. Roy B. and Geraldine H. Staton purchased Powles Funeral Home in 1968. Steve Staton joined his parents in the business in 1977, and Steve and his wife, Vicki, assumed ownership in 2001.

The recently completed renovations started late last year, and Will Staton says the funeral home appreciates how understanding families were during the renovations.

Overall, you could say the changes taken collectively have made Powles Staton a more relaxed, comfortable place.

“It was time,” Matt Staton says.

After 132 years, Stoudemire Furniture going out of business