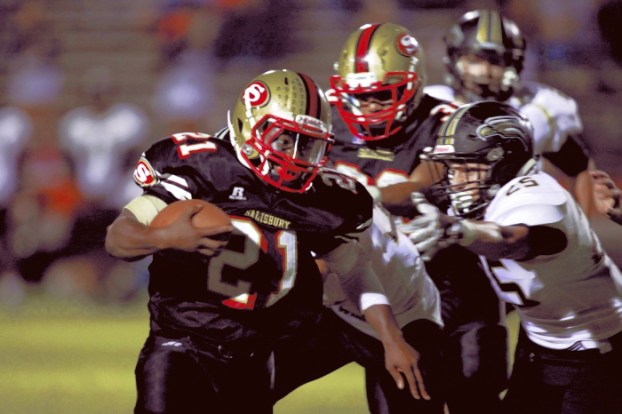 James Sipes/For the Salisbury Post Salisbury running back Willie Clark (21) breaks to the outside for 25 yards to score the Hornets' only touchdown of the game, a 14-7 loss to East Davidson last night.

SALISBURY – In a close, low scoring football game, just one or two key plays can make all the difference. The Salisbury Hornets learned that lesson the hard way Friday night at Ludwig Stadium as they dropped a tense 14-7 homecoming contest to East Davidson.

There were numerous reasons the Hornets lost its Central Carolinas Conference opener to the Golden Eagles, including four first half turnovers plus allowing the clock to run out at the end of the first half at the East Davidson 5. But this contest really came down to one critical sequence in the late stages of the fourth quarter.

In a 7-7 game, Salisbury (2-5, 0-1) forced East Davidson (4-3, 1-0) to punt from its own 10 and kicker Leo Rojas shanked it out of bounds at the Eagles’ 25. Yet four plays later, Salisbury turned it over on downs at the 28 after a couple of botched runs, an incomplete pass and a procedure penalty.

“When you have the ball on their 25 like that, you just have to punch it in,” Hornet coach Ryan Crowder said. “Instead, they completely flipped the field and that was just a killer.”

On first down from the 28, East Davidson fullback Mason Burchette broke free off right tackle and sprinted 52 yards to the Hornet 19. Two plays later, Burchette gave his team the 14-7 lead with a two yard TD run and just 4:01 left to play.

“Honestly, I have to credit my offensive line,” the 185-pound sophomore Burchette said after the game. “It was just a huge hole and without my O-line, I would not have gained anything. It was a a key play.”

After the go-ahead score, Salisbury came up one yard short on fourth down at midfield with just two minutes left. The Hornets held but Eagle punter Rojas fully redeemed himself when he booted a 43-yarder that squeezed out of bounds at the Salisbury one and effectively sealed the Hornet’s fate.

Burchette was the key offensive weapon for the Golden Eagles as he scored both of his team’s touchdowns while rushing for 102 yards. Overall, the Hornets out-gained East Davidson 252-170, but they badly lost the turnover battle and wasted too many opportunities.

“We played pretty well overall on defense,” Crowder said. “But whenever you are in a tight game like that and not putting up points, you can’t have that one breakdown that really hurts you.”

Golden Eagles coach Lance Hanner felt his team took advantage of every opportunity without being too fancy. “Everyone thinks with the way football is going these days you have to score 40 points to be a good team,” Hanner said. “But we are trying to do things old school by playing good defense, winning the battle of the kicking game then running the football tough. It has worked for us so far.”

Salisbury’s frustrating night was best demonstrated by their first four possessions of the game. They drove to the Eagle 35 then senior quarterback Harrison Smith’s screen pass was picked off by Chris Coble. On the next possession, Coble picked off Marcus Corry’s pass near midfield. The Hornets then fumbled on their next two possessions, once at the East Davidson 44 and then again near midfield.

The game was still scoreless but the Hornets had a big threat near the end of the first half.  Corry hit Malik Ford for a 41-yard pass then Smith ran three times to put the ball at the five with 15 seconds left before halftime. But with no timeouts remaining, Smith was sacked by the Eagle defense as the first half clock ran out.

“I really was not aware exactly how much time was on the clock,” Smith said. ” I was just trying to make something happen but I have to conserve time better. We just missed so many opportunities tonight. We moved the ball well, ran it well but the turnovers just killed us.”

After halftime, both team found a little rhythm as the Eagles came right out and drove 63 yards in seven plays to break the scoreless deadlock. Burchette broke free right up the middle from the 28 at 8:52 of the third period to go ahead 7-0. Salisbury responded with a 48-yard drive including a 17-yard run by Tyquan Jones and then a 25-yard TD sweep around right end by Willie Clark to tie the score at 7-7 with 2:36 left in the period.

The Hornets now try to bounce back at Lexington next Friday night. “We still control our own destiny,” Crowder said. “If we can win out, we can still win the conference but we have to execute.”

NOTES — A large crowd of students and alumni were on hand for the Homecoming festivities at Ludwig Stadium Friday night. The Pride of Troy Band from Knox Middle School assisted the Salisbury band with the national anthem then the Livingstone College band put on a high energy post-game performance for the crowd. Lora Withers was crowned the Homecoming Queen at halftime and Darius Jackson was named the King.