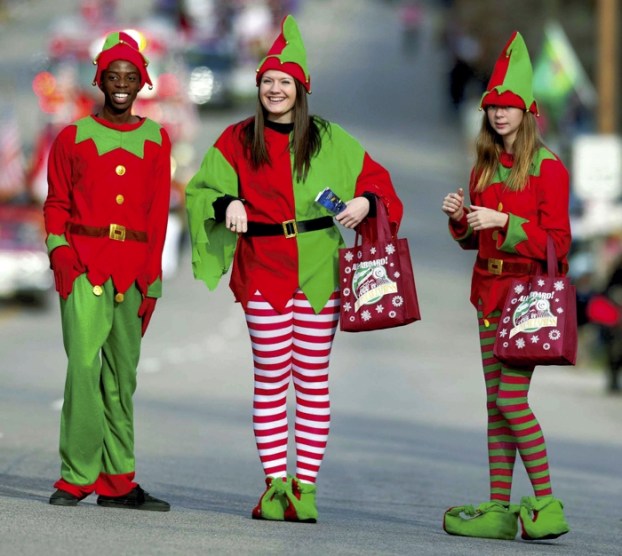 A caravan of holiday memories, old and new SALISBURY — It’s beginning to look a lot like Christmas.

For a couple of hours Wednesday afternoon, the main streets of Salisbury and Spencer were filled with marching bands, dancers, nativity scenes and Santa Claus himself, coming to town for the first time this year – but not the last.

The 56th annual Holiday Caravan parade marked the start of the festive season, starting at 2 p.m. in Spencer and 3 p.m. in Salisbury.

With a planned 140 entries, the parade drew thousands and packed the sidewalks.

In Salisbury, kids waited eagerly at the curbs not only for the bands, but for the numerous folks who tossed candy and goodies to the crowds.

Chase Phillips, 10, said he liked two things best about Christmas parades: “The bands and the candy.”

Jimmie Porter, of China Grove, Chase’s grandfather, said the family went to the Southern Rowan Christmas Parade on Tuesday where he’d managed to half-fill a plastic grocery bag with sweets.

“He’s hoping to fill it up the rest of the way,” said Porter, who added that “the more he gets, the more I get!”

The Shriners’ speeding go-karts, a line of clowns on unicycles, numerous dance troupes and the N.C. Transportation Museum’s “Ghost Train” – a truck outfitted with a variety of steam whistles and train horns – were among the most interesting entries.

Marching bands and candy were the favorites of Kaelin Huneycutt, 8, and Gracie Huneycutt, 8, who found prime spots right by the curb to better enjoy both.

Others chose their favorite places to watch the parade, some arriving extra early to try to get the best vantage point.

“We thought we’d be the first, and we were not the first!” said Renae Beeker, of Salisbury. She and her husband, Todd, parked their pickup at the corner of East Bank and South Main streets.

“The people next to us were here way before we were,” Beeker said. “We arrived early to try and get the best spot we could find.”

Renae and Todd said they come to the Holiday Caravan every year. “It’s just tradition. It kicks off the holidays for us,” Renae said. “We’ve been married 25 years, and we used to come with our families before that.”

“I like the bands,” Renae said, “but they’re smaller every year.”

“When I was growing up, we had at least 50 people in our band at Salisbury High,” Todd said, adding that this year’s Salisbury High band “still sounded strong and good.”

And there were plenty of bands represented, including high school and college marching units from Rowan County and around North Carolina.

In Salisbury, the music echoed off downtown buildings. Above the storefronts, some watched the parade from the windows.

Todd Hildebran, owner of the building at 107 S. Main St., brought his family and friends up to the roof to watch the parade in the sunshine.

Other than Fourth of July fireworks and the downtown parades, “there’s not too many reasons to be out on the roof,” Hildebran said.

But Wednesday’s parade was a good opportunity to enjoy the passing floats and bands with a bird’s-eye view of the festivities.

A number of downtown merchants not only stayed open for the parade, but encouraged customers with special deals.

At Candy Shoppe on Main, Nancy Vick and other staffers offered hot chocolate for $1 a cup, as well as salted pretzels and other treats.

“The hot chocolate and the candy apples have been the bestsellers,” Vick said. “It’s really chilly.”

After St. Nicholas had made his appearance to rousing applause, Tonya Saunders and her son, Jacob, left the parade saying they’d had a great time.

Even though she’s a grown-up and a mom, Tonya said she still loves seeing Santa Claus at the end of the parade.

“Of course! It’s being a kid again, you know, just the joy you feel,” Saunders said.

That joy, and the anticipation of Christmas, are what the season is about – and what the Holiday Caravan has worked to capture for over half a century.

There are a lot of reasons why someone suffering from cancer may need to hitch a ride. Perhaps they don’t... read more