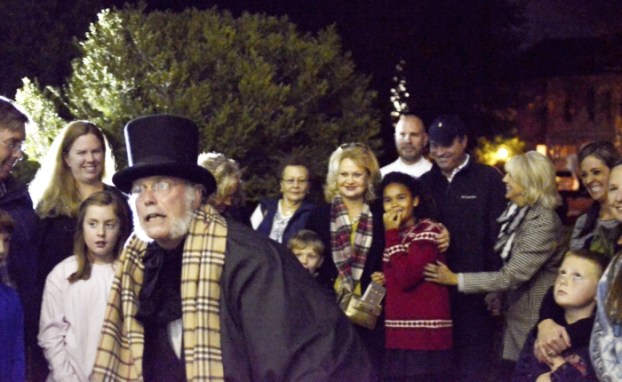 SALISBURY — The old miser who boarded the trolley at East Innes Street on Friday might not have expected to make this trip again.

Last year was thought to be the last that would see Ebenezer Scrooge taking paying customers on treks to his historic Salisbury home.

But demand for “Scrooge’s Christmas Trolley Tour” was so great that organizers brought it back for a fourth season.

“We had so many people who called and inquired about it,” said Melissa Murguz, of the Salisbury-Rowan County Convention and Visitors Bureau.

“We said yes, of course, we’d be glad to bring it back,” said Justin Dionne, managing artistic director of Lee Street theater. The theater company’s actors put on the performance, and most of last year’s cast — including both of the men who play Ebenezer Scrooge — have returned for 2015.

The show was originally created to help promote Salisbury’s trolleys, and Murguz said it’s grown into a holiday tradition for many families.

“I think it’s wonderful, and we feel very fortunate that we’re able to offer this,” Murguz said. “It’s also helped us promote and grow some of the other tours we’ve put on.”

Instead of a traditional, passive sightseeing tour, “Scrooge’s Christmas Trolley Tour” is a more interactive experience. “It gives people a chance to participate, a chance to really see a show on the trolley,” Murguz said.

“Scrooge’s Christmas Trolley Tour” is a dramatic retelling of Charles Dickens’ “A Christmas Carol,” featuring both laughter and serious moments.

The passengers on the first tour of 2015 caught sight of Scrooge — played by Bob Paolino — as he ambled up the sidewalk, looking dour in his cape.

“There he is!” said one of the kids on the trolley.

With a ringing “Bah! Humbug!” Scrooge told the customers that they were welcome to visit his home, and that they’d get their money’s worth — “and nothing more!”

Just one thing, Scrooge warned them as they turned onto South Church Street: None of that silly “Christmas Cheer.”

After all, his firm “is open 365 days a year, even Christmas Day. Why shouldn’t man be hard at work?” Scrooge asked, his voice full of disdain.

That doesn’t last long, of course, as ghostly visitors soon appear to remind Ebenezer of his past and give him a final chance to mend his ways.

The traveling performance includes stops at several historic buildings, including the Hall House and the Henderson Law Office.

Although the story is familiar, there were plenty of small laughs — as when a frightened Scrooge told the trolley driver to “Get me the Dickens out of here!”

Actor Chris Sepulveda, who has played the Ghost of Christmas Present all four years, said he’s enjoyed seeing the script evolve and having the freedom to make the role his own.

“There’s some little ad libs, a chance to make the character my own,” Sepulveda said.

Chelsea Retalic, who plays Scrooge’s young love, Belle, said she enjoys putting her own spin on the Victorian character.

More than that, Retalic said, “it’s the story of Christmas, of Ebenezer Scrooge’s journey and of sharing the joy you feel.”

For Newt Hopkins-Teeter, age 6, who played Tiny Tim in Friday’s shows, and his father Scott Teeter, performing a version of “A Christmas Carol” is a bit of family history.

“The story is really a chance to think through what you find important,” Scott said between performances.

“It’s so interesting to see how the trolley tour has created this response,” Dionne said. At the start, “Scrooge’s Christmas Trolley Tour” was part of an effort “to create Salisbury as a destination, especially for the holidays,” he said.

Lee Street theater’s actors and volunteers are also a part of three other shows or events taking place in the weeks ahead, including “The Polar Express” at the N.C. Transportation Museum and the upcoming live radio play of “It’s a Wonderful Life.”

“These collaborations have become a big part of who we are, as a non-profit agency and as a part of the community,” Dionne said.

And the tour has become a destination. Lauren Widerman and her sons, Vince, 11, and Paul, 10, drove from Eden, N.C. to see the show after reading about it online.

“It was nice,” Vince said, adding that he wasn’t scared by Marley’s ghost, but enjoyed getting off the trolley to see “Scrooge’s house” up close.

Chad and Tracy Thiery brought their kids and friends back for the tour after enjoying it in previous years. “We’re definitely glad they decided to continue,” Tracy said. “We’ve had a good time.”

Advance tickets are available planning to ride at a particular day and time. Last year, a number of tours sold out in advance.

An overnight stay package with two free tickets is also available for guests who book a room at a Salisbury hotel.

Event continues today in downtown Kannapolis By Hugh Fisher hugh.fisher@salisburypost.com KANNAPOLIS — For those who wanted to shop on Black... read more