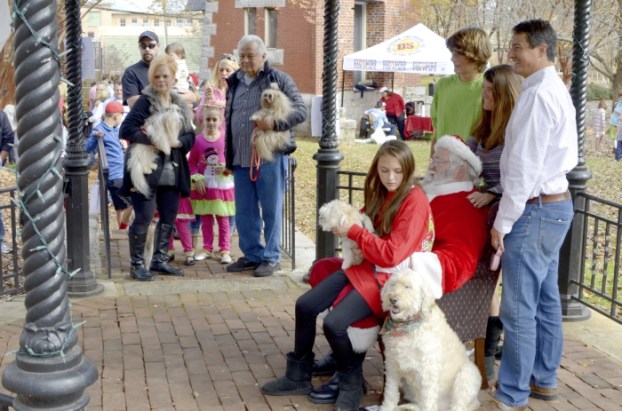 Hugh Fisher/For the Salisbury Post Members of the Crawford family from Salisbury, Raleigh and Jamestown, N.C. wait to get their photo taken with Santa Claus during Downtown Salisbury, Inc.'s photo op at the downtown bell tower on Saturday.

SALISBURY — Santa Claus and his sometime nemesis, the Grinch, drew record crowds to Bell Tower Park at the corner of South Jackson and West Innes streets on Saturday.

A mix of warmer weather and nearby shopping resulted in hundreds more people than organizers expected.

“This is definitely a record. We had over 1,000 people today,” said Mollie Ruff, promotions director for Downtown Salisbury, Inc. In past years, she said, turnout has been closer to 600.

At one point, Ruff said, the line circled the historic bell tower and out of the park, wrapping around the former First Bank building next door.

Ten minutes before the scheduled 12 p.m. end time, there were still over 60 people in line for photos, while others stayed to enjoy hot cocoa and other activities.

Ruff said organizers would extend the time so that those in line could get photos with Santa. “We don’t like to tell people they can’t see Santa Claus,” Ruff said.

The free photo op drew not only parents and kids, but entire families. The Crawford family, of Salisbury, brought relatives from Jamestown and Raleigh as well as their pets.

“We come every year, but we brought more people this time,” said Dana Crawford.

Santa and the Grinch will appear again on Saturday, Dec. 12 from 10 a.m. to 1 p.m., this time riding antique fire engines.

That event will take place in front of the downtown Salisbury Visitors Center, 204 E. Innes St.