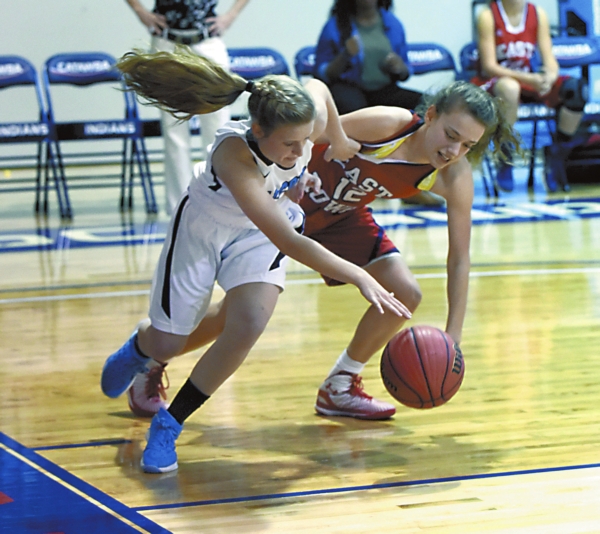 SALISBURY — Third place had a nice holiday ring to it for East Rowan’s girls basketball team.

The Mustangs found themselves dribbling in the right direction Wednesday afternoon at Goodman Gym, where they upset top-seeded West Rowan, 47-45, in the Dale’s/Sam Moir Christmas Classic consolation game.

“We came in as a sixth seed,” East coach Daniele Porter said, “and we beat a five and now a one. There’s a lot to be proud of right there. We feel like we made progress, got the right kind of leadership and all of the things we’ve been looking for.”

For West (8-2), it was almost a loss that set off some alarms. The Falcons had already beaten East in an SPC game earlier this month but struggled in the tournament, using a fourth-quarter comeback to beat No. 8 South Rowan in Monday’s opener and suffering their first defeat in Tuesday’s semifinals against eventual champion North Rowan.

Yesterday, they missed their first seven field goal goal attempts, finished 1-for-24 on 3-point tries and settled for fourth place.

“Just not our week,” West coach Ashley Poole said, outside the quiet Falcons’ dressing room. “But I’m not that concerned right now. I know what they’re capable of and I know they’ll produce in the conference. That’s what matters.”

East was led by senior guard Shenell Pharr, who shot 6-for-14 from the floor and paced all scorers with 17 points. Teammate Joceyln Lowe contributed 10 points and four assists.

“We definitely came in as an underdog,” Pharr said. “We just had to put our game all together. They may have been slow getting back on transition, but West is always going to be West.”

East capitalized on West’s artic shooting and jumped to a 6-0 lead in the opening three minutes. The Mustangs led by as much as 24-16 when Hollie Harrison sank a free throw late in the first half. But West, being West, cut it to 24-21 on Egypt Alexander’s three-point play with less than a second on the clock.

“When we lost to them right before the break, we gave them too many opportunities,” Lowe said. “This time we dug in and played a tougher game. We finished stronger.”

Of course, there were moments of high anxiety. Pharr had a basket disallowed after making a steal near mid-court and racing in for a layup as the third quarter expired. “She got it with 5.1 seconds to go,” Porter said. “If Shenell Pharr can’t go from half-court to the rim in less than 5.1 seconds, something’s not right.”

Instead, the score was tied, 32-32, entering the final period — and West could smell a second chance. The Falcons looked very much like a No. 1 in the fourth quarter and took their first lead with 5:52 remaining when Khaila Hall drove the right side for a layup and a 36-35 advantage. Teammate Mary Sobataka followed with West’s only three-pointer seconds later, and when Alexander swiveled in a layup, it was 41-36 Falcons, with 4:36 to play.

“That’s what I mean about finishing,” Lowe said afterward. “We did what we were supposed to do. We finished the game.”

It took a 12-4 finishing kick to plant the No. 1 seed. Pharr’s dribble drive for a layup with 40 seconds to go put East ahead, 45-43. And two free throws by Lowe seconds later sealed the verdict — sending East home with third-place recognition and West home searching for answers.

“We just weren’t ourselves,” said Hall, who totaled 27 points in the tournament. “We need to get back in the gym and get ready to bounce back.”

By Marny Hendrick sports@salisburypost.com SALISBURY — The Salisbury Hornets finally got their offense back on track to a degree Wednesday morning... read more