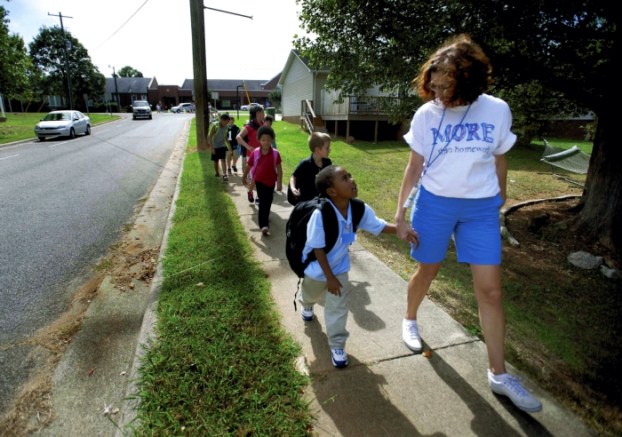 Shiloh United Methodist Church Pastor Angela Burris, right, talks with first-grader Labryan Kerns as they walk to the church. Shiloh in Granite Quarry operates an after-school ministry called Homework Hut where a limited number of students from nearby Granite Quarry Elementary school can come to get a jump on their homework for the day. Volunteers go to the school every Wednesday at the end of the school day and walk their students back to the church, which is two block away. The students get a snack and then break into small groups to work on their homework with supervision. Jon C. Lakey/Salisbury Post

The Confederate Memorial statue of ‘Fame,’ the angel holding a fallen soldier, was dedicated in 1909 by the Hoke Chapter of the United Daughters of the Confederacy.
Jon C. Lakey/Salisbury Post file photo Residents long Leonard Road in close proximity to site of Buck Station have placed signs in their yards asking for clean drinking water. A coal ash pond is located nearby and area wells are said to be contaminated with materials thought to come from the ponds.

“People ask me, have you won the lottery? And I say yes, in friendship.”

“Something greater than we were came up and stopped it for us. You looked up in the sky and said, ‘Thank God for this.’”

— Price Brown, retired Salisbury Police officer, on sudden rainstorm that prevented a confrontation between KKK members and black residents in 1960

“Volunteerism is the rent we pay for life.”

“It means different things to different people — that’s obvious. The Confederate statue is not the only
heritage in Salisbury.”

“You can’t break the cycle of poverty if you can’t read.”

“They’re the best team in the whole world. Not many people will ever be able to say something like that, but 13 very special girls from Rowan and Iredell counties can say it.”

“Erica is no longer alive. There is an agreement between Casey Parsons and her husband to not report the death.”

— Anand Ramaswamy, federal prosecutor, at the couple’s sentencing for accepting benefits for their adoptive daughter after she disappeared

“My passion is to be able to create a community to retain young people. … The energy is here. We have to seize it.”

“I finally had a piece of my dad.”

— Frances M. Morris, on remains of her  father, Chief Master Sgt. Edwin Everton Morgan, being found after his plane went down over Laos 49 years ago

“I was tired of not knowing the language. I decided I’d had enough. I want to go to school and learn.”

“People say they do it for their families, but there’s other ways to take care of your family. You may not like going to someone else’s 9 to 5, but at the end of the day, it’s not a bad thing.”

“I apologize for the things I’ve done.”

This is the most powerful thing I’ve ever experienced. I’ve never had nobody showing they cared for me.”

“When you get a letter that says don’t drink or use the water for cooking, yeah, I guess you do get pretty scared.”

“We were lucky to have Stoneman instead of Sherman.”

— Kaye Brown Hirst, Rowan Museum director, on Union Gen. George Stoneman’s sparing of the county courthouse and its records at the close of the Civil War 150 years ago

— Josh Wagner, chairman, Rowan-Salisbury Board of Education, at groundbreaking for central office

“Many teachers became first-year teachers all over again with the way instruction was being delivered to students in our classrooms.”

“We don’t need more Taco Bells or dollar stores. We need industry that can support families.”

“Embracing diversity is never wrong. The mayor that issues the proclamation is the mayor for everyone.”

“My goal as mayor is to ensure we find ways to bring our community together rather than create a divide among opposing viewpoints.”

— Paul Woodson, on not issuing a proclamation for  LGBT Pride Day

“We quickly see a larger society that helps produce a young man… He didn’t just make this stuff up himself.”

“I have been told she hasdone every single job here except, maybe, crawling under a train to repair it. And she’d probably do that if someone would hand her the directions.”

“The job of the county chair is to preserve public confidence in the administration of elections. No one who reads these things will feel (Mac Butner) is qualified to do that.”

Editorial: One probable prediction for the coming year

Looking ahead to a new year can be treacherous for predictions. For the most part, guesses go wrong. Major events... read more