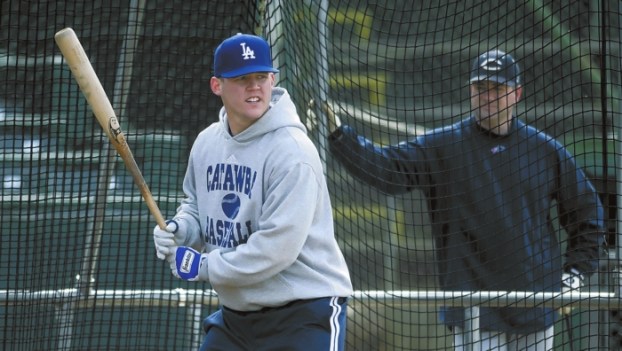 Jerry Sands went through the Chicago White Sox team workout in Oakland on Sunday and prepared for tonight’s season opener against the Athletics.
Sands, a 20-year-old superhero at Newman Park in 2008 when he hit 24 homers, drove in 85 runs and batted .390 for Catawba, is now a 28-year-old journeyman who’s bounced in and out of the major leagues since 2011.
But he’s a happy journeyman with a family, and he’s thrilled to leave Spring Training with a major league team for the first time. MLB’s minimum salary is $490,000. That beats substitute teaching paychecks, and that’s a job Sands has experienced.
The White Sox had started north from Arizona and were playing two exhibitions at Petco Park in San Diego when White Sox manager Robin Ventura called Sands and reserve outfielder J.B. Shuck into his office to let them know they could breathe easy. They’d made the 25-man roster.
“You want to act you like you’ve been there before and not show emotion, but it was exciting,” Sands said. “Every year, they tell you that you have a chance to make the team, but this was, realistically, the first time I had an opportunity to actually do it. The first thing you do is call home and let everyone know you’re on the team. After that, you try to settle down and help the team win ballgames.”
It didn’t take long for the 6-foot-4, 225-pound Sands to win one.
It was a 3-all game last Friday at Petco against the Padres, the eighth inning, and the Padres intentionally walked White Sox slugger Jose Abreu with first base open to put two men on with two outs. Left-hander Kyle McGrath was on the mound. Ventura sent Sands, a right-handed slugger with a history of pounding southpaws, to the plate as a pinch hitter.
Sands delivered the go-ahead single. The White Sox went on to win 5-3.
It’s his ability to maul lefties that gave Sands a role on the White Sox.
Ventura no doubt remembered Sands going 3-for-8 when he started two games for Cleveland against the White Sox last April. Sands also made a pinch-hitting appearance against the White Sox and delivered a hit against lefty reliever Zach Duke.
The White Sox were the worst in the American League in 2015 against lefties, batting .240 with little power. Sands has batted .292 — with power — against lefties in his limited MLB career, and that’s why the White Sox believe he’s going to help. Sands also has a history of being clutch. He’s struck game-winning blows for the Los Dodgers, Tampa Rays and Cleveland Indians.
Sands helped his cause this spring when he launched two homers in a March 21 game against Oakland in Arizona.
“I really didn’t have a great spring, but I did accomplish some of the things I set out to do,” Sands said. “That game I hit two homers I got fastballs to hit — one from a lefty and one from a righty.”
Sands is primarily an outfielder, but he has played hundreds of games in the minor leagues at first base. Abreu is the only first baseman on the White Sox roster, so Sands is the backup. There’s also talk of Sands being used “in a pinch” at third base. He played two games there in the minors.
“I do take groundballs at third, just in case,” Sands said. “I played a few innings at third in the exhibition games. You have to be ready to play whenever and wherever you’re needed.”
Sands once was considered a top prospect by the Dodgers, the team that drafted him in 2008.
When the Indians waived Sands last December and the White Sox claimed him a few days later, Sands thought he had a chance to make the team. But when the Sox added Jimmy Rollins in February and signed outfielder Austin Jackson in early March, roster spots were dwindling.
The sudden retirement of first baseman Adam LaRoche changed the numbers and provided Sands with the chance to claim a roster spot.
“That did open things up,” Sands said.
Sands has been trying to shake the “Quad A” player label for several years. That’s a player who dominates in Triple A but can’t quite cut it against harder heat and nastier breaking balls in the majors.
Sands has basically destroyed minor league pitching while playing for nine different teams. In the minors, he’s walked frequently while belting 151 homers, driving in 498 runs and batting .276.
In the majors, in 132 scattered games, he’s batted .238 with nine homers and 50 RBIs.
Sands is no stranger to April baseball. The Indians called him up just three games into the 2015 season, and on April 11 he produced one of his finest games — three hits and four RBIs against the Detroit Tigers. Sands socked the double that knocked out all-star lefty David Price.
“I was called up so early last year that even though I wasn’t with Cleveland for their first game of the season, I was with them for their home opener,” Sands said. “So opening day isn’t going to be totally new for me.”
Oakland’s starting pitcher tonight will be right-handed ace Sonny Gray. That means Sands won’t be in the starting lineup, but the Athletics have three lefties in the bullpen, including closer Sean Doolittle. Ventura might tell Sands to grab a bat in a key situation.
Sands is looking forward to the first home game for the White Sox on April 8 against the Indians at U.S. Cellular Field. He had a 4-for-4 day in that ballpark when he played for the Dodgers in 2011.