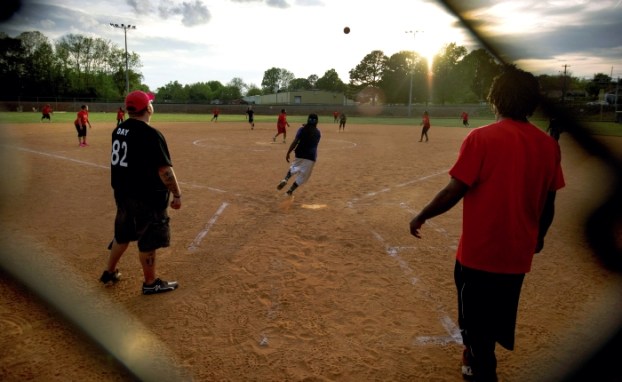 Royal Kickers’ A.J. Bryant turns toward first base after a high kick up the middle. Coed Adult Kickball is one of the leagues that Salisbury Parks and Recreation offers for. Interest this year was high enough to field four teams that play at Jaycee Optimist Sports Complex on South Martin Luther King Jr. Avenue Tuesday and Thursday evenings. Jon C. Lakey/Salisbury Post Carollene Gardin, center, is the most vocal supporter of the Salisbury 49ers team. Mary Bryant, left, watches the action on the field. Jon C. Lakey/Salisbury Post With determination on his face, Aaron Holsey, sends the force of his right foot into the incoming kickball. Jon C. Lakey/Salisbury Post Dorthell Little, on the Run and Tell That team, runs up to catch the popped-up ball for an out. The ball inadvertently hit Little on her raised knee. That caused the ball to pop up and just forward, but not too hard to catch. Jon C. Lakey/Salisbury Post

A woman in a purple shirt steps up to the plate on a warm Thursday evening at the Jaycee-Optimist Sports Complex. She’s up against a fast pitcher in a red shirt.

The ball flies low towards the Royal Kickers player and hits her in the leg, causing her to stumble to her knees.

He got her seconds before she reached the base.

The 49ers’ supporters exploded with cheers in the bleachers next to the team’s dugout. One fan started a chant that went on for at least five minutes.

“Who you with?” the woman called.

The game was filled with laughs and frustration, easy outs and home runs and T-shirts and dusty sneakers — all in the name of the age-old game of kickball.

The Salisbury Parks and Recreation Department didn’t hold the kickball league last year, but it did organize it for the two years before that, Steve Clark, recreation coordinator, said.

Adults from the age of 18 and older registered from January to April to play twice a week in an eight-game regular season. There is a single elimination tournament at the end of the season, and season and playoff champions are named.

The Parks and Recreation Department provides officials and keeps up with league standings.

Clark said there are four teams this year. Other parks and recreation departments have kickball leagues, so Clark said Salisbury’s Department decided to have one of its own.

“It was like everybody that was there for the softball game was on the fence watching the kickball game,” Clark said.

Although kickball often brings up memories of childhood, the game was no joke for the players. There were some light-hearted moments, but players sometimes got a little upset and challenged the calls made by the referee.

The referee even had to tell the players to get back in their dugout when they walked out onto the field to complain about a call.

“Ya’ll can’t play and call the game, too,” the referee said.

On the 49ers side, the crowd both taunted the other team and cheered their own team on.

When a team member kicked a ball high up into the air only to be caught by the other team before it touched the ground, leading to an automatic out, some fans could not help but express their frustration.

“I told you not to kick it in the air,” one audience member yelled out.

But they were supportive of their own teams, calling out for the players on the bases to run when the other team was still fumbling to recover the ball.

Alisha Freeman, a 49ers fan, said she came out to watch her fiancé, brother and sister play. She said the kickball competition is a great activity for adults.

“Grown-ups need to have something to do,” she said.

Odessa Peoples came from Lexington to see her cousin play for the Royal Kickers. She goes to Lexington Senior High School and said it was interesting to see kickball outside of the high school realm.

“It’s fun to see other people play kickball instead of just at school,” she said.

“It was great to see the Royal Kickers,” she said. “It was just something different.”

Devora Neely was a captain for the 49ers team and is also a team mom for the Salisbury 49ers football team. She said participating in kickball is a good bonding experience for the coaches, team moms and friends of the team before the season starts.

She also said it serves as a good example for the kids on the team.

“We wanted to be an example and have them watch us compete,” she said.

For some players, it was fun to get in touch with something from their childhood.

“It felt good to be out there. I felt like a kid again,” Lanesha Price, who was on the Royal Kickers team, said.

AJ Bryant, a Royal Kicker, said it was nice to have something to do after work. His wife Shatara also played on the team.

“It keeps me young and makes me feel like I still got it from high school,” he said.

Steve Clark, from the Parks and Recreation Department, said the games help people stay in shape.

“The folks that play, they enjoy it and it’s a good way to get active and get some exercise,” he said.

Clark said he hopes more people will go out to watch the games. If more people want to get involved, the department may start a league competition for the fall.

The games will continue Tuesdays and Thursdays at 6:30 and 7:30 p.m. at the Jaycee-Optimist Sports Complex. The last game will be on May 10 and the tournament will start on May 12, if the weather does not postpone any games.

On they go: Jennifer and Michelle making strides

By David Freeze For the Salisbury Post I expected good efforts from Jennifer Payne and Michelle Patterson when they signed... read more