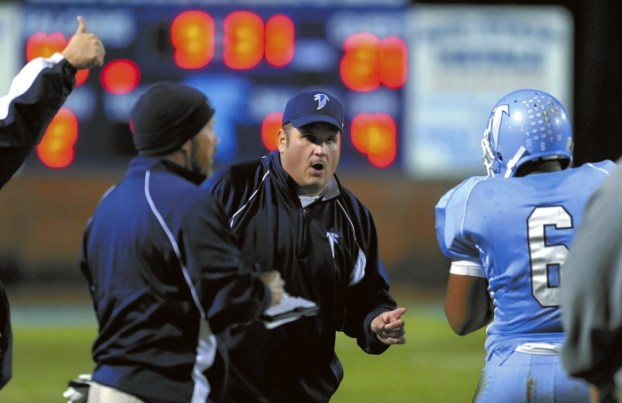 Jon C. Lakey/Salisbury Post file photo... Former West Rowan High School football coach Scott Young, shown in a game in 2010, has returned to head coaching. Young confirmed on Friday evening that he has accepted a position at Independence in Charlotte.

Just over a year ago, Scott Young stepped down as head football coach at West Rowan High School, leaving a legacy of 172 wins in 17 seasons and three state 3A championships.

Young confirmed Friday night that he has accepted the head football coaching position at Charlotte’s Independence High School. He begins spring practice with his new team on Monday.

Young resigned as head coach at West in April 2015, due to health concerns. He has had well-documented heart issues and is on a heart transplant list.

For the most part, Young felt well enough to assist West’s new coach, Joe Nixon, last season, but he still had a yearning to be the head man.

“I made a decision that was best for the team and my health at the time,” said Young last night. “But I missed it as soon as I let it go. I need to do what is my purpose in life — and that’s coaching football and teaching young men.”

Young said that the move to Independence began in the last few weeks, after Justin Hardin left Independence to become defensive coordinator at Charlotte Latin.

He had been looking at positions and Young said that he had interviews at two schools, one in South Carolina and one in North Carolina. He did not name the schools.

Young’s health came up in both interviews and he did not get either job.

“Actually, I was getting discouraged,” said Young. “But Independence did its due diligence when I explained two things — No. 1, my heart function has improved  and No. 2, I’ve been upgraded to a 1-A status on the transplant list. It could be any time, but that’s not something that we can control.

“I have a great set of doctors in Charlotte and Independence knows that when I get the transplant call, I will miss six to eight weeks,” continued Young. “But they also know that I’m in this for the long haul and plan to be at Independence for a while. I think we ended up where the good Lord wants us.”

Independence is in the Southwestern 4A Conference, a fact that excites Young, after 18 years as a 3A coach.

“You know, with all of the success we had at West, it’s always in the back of you mind if you can do it at an even higher level,” added Young. “And it’s not like we’re having to rescue a program from the dead, but just trying to get it back to where it needs to be.”

Independence was 8-5 last season but most fans remember the unbelievable success of coach Tommy Knotts between 2000-2006, when the Patriots won seven straight state 4A championships.

The Patriots did not lose a game for years (109 consecutive wins, 2000-2007) and produced many high profile, future NCAA Division I stars like quarterback Chris Leak.

Young’s team won nine conference titles at West Rowan and three straight state championships between 2008 and 2010.
Prior to coming to West Rowan in 1998, Young was an assistant at Davie County for four seasons.

Young’s teaching position will not be available until next school year, but the coaching begins immediately. He said that he will commute until his family’s house sells here.

“I don’t do anything without including my family,” said Young. “Everyone is excited about new things and this is something new after 18 years. And that traffic is not something I want to tackle long-term, so moving is necessary.”

Young’s son, Bryant, will be going with his father to Independence. Bryant was a sophomore quarterback who saw some playing time last season.

Bryant will be hoping to secure a starting position, just like everyone else, Scott Young says.

“I believe in the platoon system, so there are 24 open positions down there, counting the kicker and punter,” said Young. “Even if you started last year, you’re going to have to win the job again. All of the starting positions are wide open at this point.”