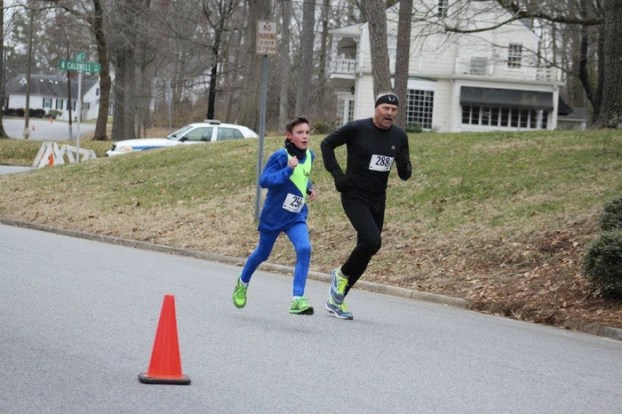 There are no local races this coming weekend. With the Buck Hurley Triathlon and the TWAM 5K already completed early in the month, there is nothing else until May 28 and the Bare Bones 5K. A couple of other nearby events will highlight early June, specifically the Badin Triathlon on Saturday, June 4 and the Main Street Challenge 5K on Friday evening, June 10.

The Bare Bones 5K Run/Walk is one of the area’s most unique races. The race benefits Relay for Life and gets volunteers from that group. The 5K course starts at Knox Middle School and uses a portion of the greenway and the Eagle Heights neighborhood. The race uses recycled awards from other races that are relabeled for the Bare Bones event. This year’s awards will have a Christmas theme. The same was done with the shirts a few times. This year, the race shirt will be a black, open mesh dri fit shirt with the unique running skeleton logo on it. Any athletic shoes that are gently worn can be recycled for Rowan Helping Ministries just by bringing them to the race. This is the 15th Annual Bare Bones 5K.

As usual, more information on Bare Bones and any of the other upcoming races is available at www.salisburyrowanrunners.org by clicking on the upcoming events link and then the race calendar.

In this column, I have attempted to let readers get to know a little bit more about many of the runners in the area. Some are exceptionally fast and some have had great adventures. Others are featured for various reasons. This week, I chose to highlight a very good runner that to many is more known for his coaching of area youngsters. For eight years now, Kevin Marsh has been making a huge difference by coaching the YMCA Warriors in both track and cross country. The Warriors range in age from about 4 up to 18 and some of the older ones have already used the program for successful transition into middle school and high school athletics.

Kevin Marsh ventured into coaching as his stepson, Andrew Burgess, became interested in running track. Kevin had participated in both track and cross country in high school and hoped to help Andrew. The local AAU team was focused on sprinters, something that Andrew was not. Kevin said, “We thought he might be better running the 400 and 800 meter events and I volunteered to time Andrew in his practice runs so that he wouldn’t have to wait until the sprinters finished. I became interested and worked to gain more knowledge by acquiring a Level 1 USATF Coaching Certification.”

After three years, Kevin and his wife Ester formed the Warriors through their association with the JF Hurley YMCA. Kevin said, “Our focus with the kids is to encourage them to get better as the season progresses. It is not about winning so much but more on improving and working to set new personal records. I think it is one of the reasons that they keep coming back to us even after they have reached high school. We also focus on teaching life lessons and emphasize how hard work, sacrifice and discipline bring rewards not only on the track but in life. We also make sure that the kids focus on their school work ahead of track and cross country. I’ve seen kids who are struggling in school make the A/B Honor Roll after just one season working with us. That is better than winning medals to me!”

Kevin remembers a few humorous moments. He said, “Once I challenged the team to qualify for regionals in at least one event and PR at one, and I promised to shave my mustache and hair if they did. Needless to say, I was soon bald and without a mustache. Another time, I noticed one of my athletes kept putting his hand to his mouth as he ran. He later told me that he didn’t want to throw up on the track so he threw it in the grass. Needless to say, I congratulated him on his race and thinking of others.”

A very good marathoner himself, Kevin ran his first marathon at age 50 and has completed five others. He recently set a half-marathon PR of 1 hour and 38 minutes and plans to focus on the half marathon for the near future.

Kevin readily credits his wife, Ester, for making the team go. He said, “We share the same vision and goals for this team. Without her, it just wouldn’t work.” Memorable in the journey was Andrew making All-American in two events at the Junior Olympics in Norfolk, Va. at age 8. Kevin added, “That is something that I will always cherish.”

Originally planning to coach only until Andrew went to college, Kevin has had to rethink that thought. He said, “Each year some new young person joins our team and I think that as long as they enjoy it, then I will stick it out too. It is a much bigger time commitment than most people realize but the rewards are big too. You can’t do much better than seeing a kid’s smile when they have done well, especially when they are smiling at you.”

“I only hope I am giving them as much as they give me. I truly love being a running coach.”

David Freeze is a nationally certified running coach and president of the Salisbury Rowan Runners. Contact him at david.freeze@ctc.net. Learn more at www.Ulearn2run.com

A Bridge note  Local Bridge with Myrnie McLaughlin is “temporarily out of order,” according to Myrnie, but will return soon. Games... read more