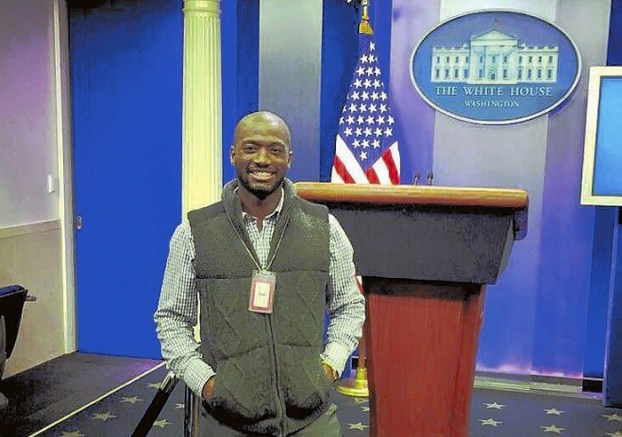 Mr. Smith actually went to Washington — and looks to make his mark Tremayne Smith, as he appeared in the program for East Carolina University’s ’40 Under 40 Leadership Awards.’ Submitted photo

SALISBURY — The last time you heard about Rowan County native Tremayne Smith, he probably was earning Teacher of the Year honors at Rocky Mount High School and living a long-held dream of being a band director.

Smith seemed to be at the perfect spot for a young man who had been a music education (and political science) major at East Carolina University and a three-year drum major at both West Rowan High School and ECU.

So why is Smith on a completely different career path now, working in a congressional office in Washington, D.C., while also pursuing a graduate degree full-time from George Washington University?

“I didn’t want to make a career as an educator in North Carolina,” he says, “and I thought it would be great to come back to D.C.”

Smith, 28, had worked for a year after his 2011 graduation from ECU in then U.S. Sen. Kay Hagan’s Washington office. Then in August 2012, he took the band director’s post at Rocky Mount High School. Over his three years at Rocky Mount, Smith says he rebuilt the band program into one being recognized on state and national levels.

After his first year, he received an Encore Award — one of four given out that year in the state — recognizing band directors in the country who had shown  exceptional accomplishments in their programs.

But now he’s living just north of Capitol Hill, not too far from his full-time duties in the office of U.S. Rep. G.K. Butterfield, D-N.C., who is chief deputy whip of the House Democratic Caucus and chairman of the Congressional Black Caucus.

Smith’s duties for Butterfield include heading the internship and fellowship programs, coordinating tours of the White House and Capitol for constituents, handling some videography and photography chores, helping with daily office duties and assisting the chief of staff and congressman as needed.

During the evenings, Smith has another full-time job — earning his master’s in political management at GWU. The school is the top institution for applied politics, Smith says, and he expects to graduate next May.

The award recognizes 40 emerging leaders who received their start at ECU, as well as graduates who have used their ECU experience to make an impact in their professions and local communities.

Besides holding down the drum major role for three years at ECU, Smith also was student body president as a senior. He has returned regularly to ECU to speak to students and work in the school’s summer music camps.

Smith has an identical twin, Dewayne, who is a Livingstone College graduate. A sports science major, Dewayne works for an athletic facilities company in North Carolina.

The men’s mother is Patricia Watkins, and their grandmothers Libby Blackwell and Shirley Smith also had strong roles in their upbringing.

“I owe so much to Salisbury and my childhood and experience being a Rowan County native,” says Smith, who likes to incorporate the words “lift as you climb” into his life.

Smith is keeping his love for music alive by playing the French horn in a symphonic orchestra in Washington. He says he still misses daily the teaching of young musicians with eager minds, but he now has his sights set on other goals.

Smith’s interest in politics goes back to his working on the presidential campaign of Barack Obama. While part of Hagan’s staff, Smith happened to meet Obama and had a short conversation with the president at the Thomas Sweet ice cream shop in Georgetown.

As for his future, Smith has plans to stay in Washington and find ways to become involved in legislative policy, or maybe he’ll consider earning a second master’s degree from the John F. Kennedy School of Government at Harvard University.

He knows he ultimately wants to return to North Carolina and become involved in politics and government here.

ECU, for one, thinks Smith is someone to watch.

Ann Coggin provided this photograph from May 31, 1933, of the second-year kindergarten glass of Agnes Weant and Marie Graf.... read more