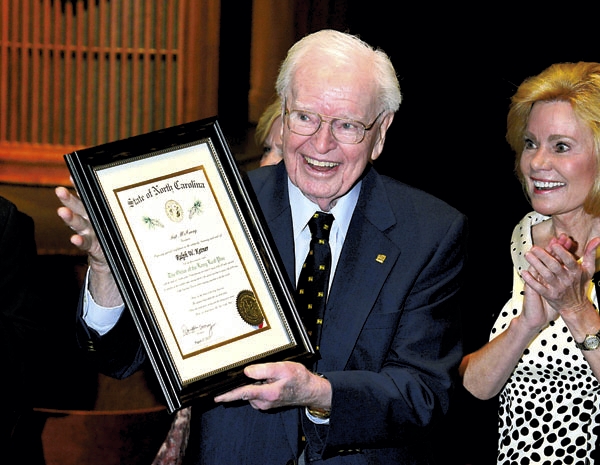 Ralph Ketner received the Order of the Long Leaf Pine from the governor. Wayne Hinshw, for the Salisbury Post

Editorial — Ketner a lion of a leader

The passing Sunday of Food Lion co-founder Ralph Ketner at age 95 brings to mind George Bailey in the movie, “It’s a Wonderful Life.” George doesn’t appreciate the good work he has done in his life until an angel helps him see how wretched his hometown would have been if he’d never lived.

Ketner got a glimpse of his life in a different way several weeks ago, after he became ill and notified friends that he was entering hospice. The people of Salisbury-Rowan and of Food Lion quickly penned letters, cards and emails to thank Ketner for all the blessings that he and Food Lion brought to their lives, from employing thousands of people to showing kindness in ways large and small. The outpouring touched Ketner, and he rebounded for a while. He didn’t have the George Bailey experience, exactly, but perhaps Ketner saw his life through others’ eyes and felt the admiration so many had for him.

“Ralph Ketner was a pioneer in the grocery business and an incredible businessman,” Gov. Pat McCrory said in a statement released Monday. “Ralph was a good friend. I had the pleasure of serving on the Catawba College Board of Trustees with him and got to know him well. Ann and I offer our sympathy and prayers to the Ketner family at this difficult time.”

People who never invested a penny in Food Lion reaped dividends from having the dynamic company in Salisbury. Thanks to Ketner’s innovative pricing strategy and hard work — and the able people who worked with him — jobs and profits flowed. Ordinary people became millionaires, and wealth rippled out to colleges, churches, arts groups and nonprofits.

Ketner himself proved to be incredibly generous, showing leadership in philanthropy just as surely as he showed it in selling groceries. Among the many entities he helped are Catawba College, Rowan Helping Ministries, Nazareth Children’s Home. He and wife Anne led the revitalization of The Plaza, formerly the Wallace Building, and then gave the building to the city. The list could go on and on.

Two sides of Ralph Ketner emerge from retrospectives on his life. One is the determined entrepreneur and mathematical genius, a no-nonsense businessman who drove is company to the top. The other is the kind-hearted humanitarian known for being humble and gracious. There’s no question that Ketner mellowed through the years, but the two sides were always present in some measure.

People in Salisbury tend to think of Ketner’s legacy in terms of the immediate community. He actually had an impact on all of North Carolina and beyond, and on the retail industry. Ralph Ketner made history. Salisbury will miss him very much.

My Turn: Education or indoctrination?

By Frank Walker Special to the Salisbury Pot I have to ask myself, every time I read an article about... read more