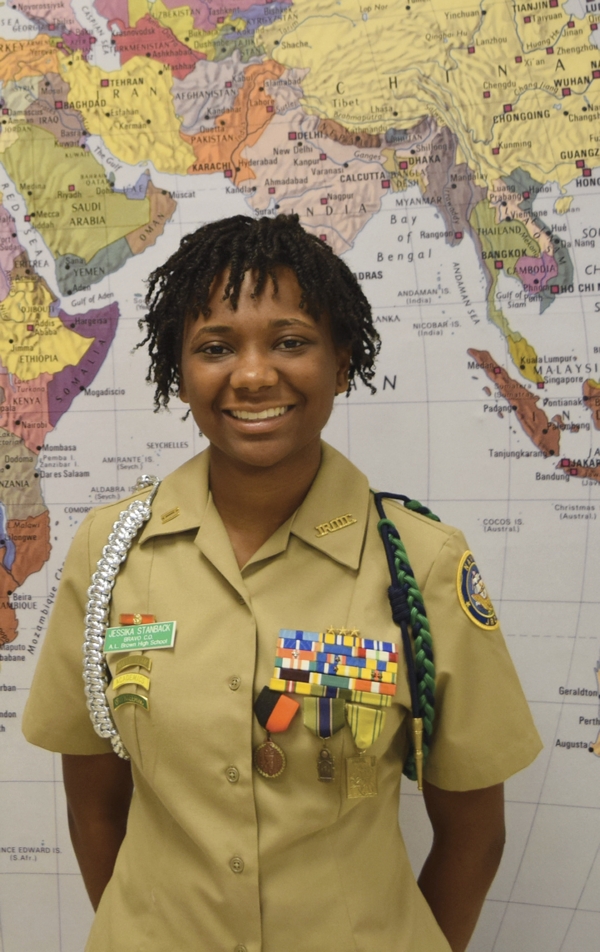 Graduation 2016: She was accepted to three military academies

KANNAPOLIS — Jessika Stanback, an A.L. Brown senior, planned to enlist in the military after graduation. When a recruiter told her that she could have a career in engineering, she decided to change her plans. But A.L. Brown’s JROTC commanders encouraged Stanback to apply for a highly competitive summer seminar at the U.S. Naval Academy.

“The worst thing they can say is no, so you might as well apply,” she said they told her.

Jessika spent the summer between her junior and senior year of high school in Annapolis, Md. By the time she left, she’d fallen in love.

“Navy’s kind of been my dream school,” she said.

It was small, family-oriented, rigorous and had free tuition.

The Naval Academy, along with other U.S. military academies, only have about a 7 percent acceptance rate, Jessika said, and the application process is long and drawn out.

The preliminary application, application and physical went off without a hitch. But Jessika said she panicked when she was called back for a remedial medical exam.

“I started crying,” she said.

Jessika said she’s physically fit from running track in high school, but she does have a severe pollen allergy that requires her to use an inhaler. When the second medical exam came back clear, she said she cried again – from happiness, this time.

She applied to three military academies: West Point, the Naval Academy and the Coast Guard Academy. And she got into all three.

“It’s really rare for someone to do that,” Jessika said.

Jessika knows her application for the Naval Academy was considered along with ones from more than 21 different countries. She was also accepted at N.C. State University.

“You can’t really make a wrong choice,” she said.

In the end, Jessika chose to attend the Naval Academy. She reports to the campus on June 30 for a summer training camp. She knows that it will whip her into shape.

“I’m just looking forward to being there,” she said.

When she graduates, Jessika will be an officer in the U.S. Navy, and will begin a five-year term of service, but she wants to make it a career.

“I feel like if I only stay those five years, I kind of just took advantage and I’m not really giving back to my country,” she said.

But first, she said, she’ll have to work on her swimming.

UPDATE — KANNAPOLIS — A suspect has been arrested in the bank robbery Tuesday. The follow-up investigation resulted in the... read more