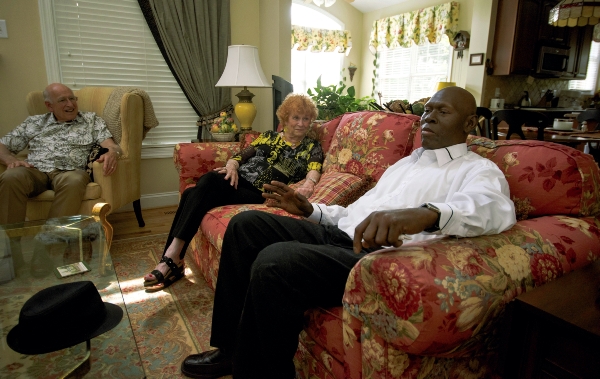 JON C. LAKEY / SALISBURY POST Bob and Jan Lewis entertain their friend, Patrick Dye, right, at the Salisbury home. The couple, along with Ronald and Marilyn Smith, have been advocating for him since his cancer diagnosis.

Out of the corner of his eye, Patrick Dye gazes at the grand piano.

It’s a beauty, and is owned by his friends, “Miss Jan” and “Reverend Bob.”

Patrick can’t take his eyes from the instrument.

Well, that’s ridiculous, I think to myself. Everybody should play a little something. Breaking the iron-clad rule that the reporter does not get involved in the story, I say to Patrick, “Let’s go over to the piano.”

His face breaks into a wide smile — he smiles a lot — and sits down with me, and I show him how to play “Chopsticks.”

In a few minutes, he’s got it pretty good, and I play the accompaniment with him. We finish and everybody breaks into laughter. Patrick just needed a little help, and his friends have been helping a lot lately.

“Miss Jan” and “Reverend Bob” are Jan and Bob Lewis. Bob’s a retired Presbyterian minister — hence the moniker. Although Jan is white and Patrick is black, there are not many moms and sons who are this close.

“I talk to him just like I would one of my children,” Jan admits.

Married 40 years, Bob and Jan share six children, nine grandchildren and one great-grandchild. Bob is 78, and Jan says he married a younger woman. And that’s all she’ll say about her age.

Patrick, 55, and the Lewises struck up a friendship some seven years ago, when he was doing yard work for a neighbor. They quickly realized what a hard worker he was, and have gotten to be good friends in the last few years.

They’ve become advocates for Patrick, getting him glasses through the Lion’s Club, and helping him get his teeth fixed with Dr. Fortner.

David Post has provided legal assistance, and says the thank you note Patrick wrote him was the first he’s ever received from a client.

For the past eight months, the Lewises, along with Ron and Marilyn Smith, have driven Patrick back and forth to Baptist Hospital, for cancer treatments.

His tutor with Rowan Literacy Council, Rochelle, even traveled to the hospital to visit him.

About eight months ago, a knot came up under Patrick’s chin.

Dr. Leighanne Dorton, a local ENT, removed the growth. Patrick also had enlarged lymph nodes in his arms, stomach and legs. He was diagnosed with lymphoma, and began treatments right away.

Late last week, he was to start his sixth and final round of chemotherapy.

“They can’t find nothing in my body that’s cancer-related,” Patrick says. “I can’t ask for nothing else. I put my trust in God. I have Miss Jan and Reverend Bob. When you’ve got people who have the love of God in their hearts, we are united by the spirit of God.”

Jan, who’s sitting beside Patrick on the sofa, wipes her eyes.

“It’s awfully hard not to cry,” she says.

Patrick lived in the shelter at Rowan Helping Ministries for the past two years, but had begun to turn his life around. He was one of the first graduates of the Jobs for Life program at First Baptist Church, and still keeps up with Tom Speaks, his mentor. After completing the course, he landed a job at Novant Health Rowan Medical Center.

He worked in the kitchen, cleaning dishes and mopping floors.

It thrilled Jan that the chef bragged on Patrick saying, “He keeps everything so clean and nice.”

“Be yourself,” Patrick says. “Treat people the way you want to be treated, and you’ll come out on top.”

After Patrick’s diagnosis, he was able to move in with family members while undergoing chemo. His brother, Harold, has taken him for treatments as well.

“They helped me out,” he says of Tony and Peaches. “I didn’t have nowhere to go.”

Kyna Grubb, RHM’s executive director, says he’s first on the list for the Eagle’s Nest, its transitional housing facility. He signed a contract with his case manager, which reiterates his goal of moving to permanent housing via the Eagle’s Nest.

“We are recruiting painters for him to be able to move in when he is ready,” she says.

Along with his work at the hospital, which he hopes to return to soon, Patrick does a slew of odd jobs, so he has income that’s required to live at Eagle’s Nest. When he does move in, he’ll have a life coach to help him create and manage a budget and a household.

“Patrick is such a great guy,” Kyna says. “His outlook has been very positive.”

Patrick admits that chemo has made him a bit tired at times, and that constipation has been the worst side effect.

“Once I get everything moving, I’m OK,” he says.

In Salisbury, he’s been under the care of Dr. Brink Brinkley, as well as Dr. Doug Shellhorn.

Bob has helped Patrick get signed up for Medicaid.

“That’s been more difficult than I thought,” says Bob, in his characteristic, straightforward manner. “They have what’s called Emergency Medicaid, and it sounds like it should be prompt, but it’s not.”

“It was rough,” Patrick notes.

“It’s been absolutely amazing the professionals who have given of their services,” Bob says.

“It’s been an uplifting journey in my life,” Patrick says of the experience.

“What drives us is realizing Patrick’s possibilities,” Bob says. “He’s not where he was. He’s come along way and still has a long way to go.”

He’s got other friends, too. He’s done a lot of work for realtor Greg Scarborough, helping paint rental houses. He’s also worked for the Smiths, the Sayers, the Dunhams and Ben Martin. He can fix just about anything.

“I watch somebody do something, I can do it,” he says.

It wasn’t always this way.

“Earlier in my life,” he says, “I couldn’t stay focused. I had a dad, but he wasn’t around. I came through some hardships.”

So has Jan. She got severely sick with septic shock in 2011 and nearly died.

“I know I’m here for a reason,” she says, “and I know in my heart of hearts it’s Patrick.”

“Miss Jan is a praying woman and a friend,” Patrick says. “It gives me the strength and courage to go on. With good people standing by you, you’ve got a will to live.”

Ketner eulogized as man who ‘made world a better place’