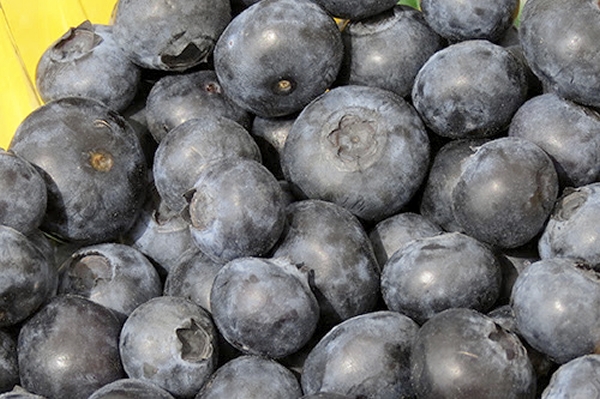 We should have a good blueberry season this year.

Consumers can expect a strong North Carolina blueberry crop this season, according to the N.C. Department of Agriculture and Consumer Services. Blueberry harvest began in mid-May and is expected to last through August.

“Most of the growers we’ve heard from expect to have a solid crop this year,” said Agriculture Commissioner Steve Troxler. “It won’t be a record year, but folks should be able to find plenty of fresh, locally grown berries well into summer.”

The majority of N.C. blueberries are sold directly to consumers at local farmers markets, roadside stands and you-pick farms. Blueberry fans can search the department’s website,www.ncfarmfresh.com, to find local farms and markets near their homes or while they’re on vacation. Consumers also can find local blueberries in many groceries stores across the state during the season.

North Carolina is the seventh-largest producer of blueberries in the nation, yielding 48.8 million pounds in 2014. Bladen County is the top producing county with more than 3,000 acres of blueberries. More information is available at www.ncblueberries.com.

June is the 79th annual National Dairy Month, a time to celebrate the farmers and their products. According to the U.s. Department of Agriculture, North Carolina has just 206 licensed dairy farms, with 47,000 cows producing 116 million gallons in the state in 2015.

Each cow produced more than 2,500 gallons of milk last year. No wonder they’re tired and have to lie down now and then. a million pounds of milk was used to make cream and butter.

To find out more about dairy farms and tour one in your state, visit http://www.southeastdairy.org/dairy-farming/farm-tours/.

It’s not the salt shaker

A study by the FDA shows that while many Americans are trying to reduce their salt intake, “the deck is stacked against them,” according to the FDA.

That’s because processed and prepared food are heavy on salt. The American Heart Association has been pushing for years to get people to eat less salt, and educate people about salt’s affect on blood pressure.

The FDA is pushing for voluntary targets to lower sodium in prepared foods, though the industry is reluctant to change. Some companies argue that people like salt and if they lower the content in a certain food, consumers will switch to another, saltier brand.

The FDA estimates that reducing sodium intake by 40 percent could, over the next ten years, save 500,000 lives and $100 billion in health care costs.

Craving barbecue, but trying to avoid the fat?

The Comfort of Cooking blog offers this three-ingredient recipe that’s burst with flavor and uses a superfood – sweet potatoes.

1/3 cup barbecue sauce, plus some to serve on the side.

Preheat oven to 425 degrees. Put the sweet potatoes, cut side up, on a large baking sheet and roast until tender, about 35 minutes, depending on the size of your potatoes.

In a saucepan on medium low heat, stir together chicken and barbecue sauce and heat until warm, about 10 minutes.

Top each potato half with a scoop of the chicken and garnish with green onion, parsley or cilantro.

You could also use bone-in thighs, cooked and shredded for more flavor.

And finally, a cocktail to help you manage the heat.

This one is called the Summerlin and comes from Liquor.com. It’s one of the simplest recipes on their and can easily be multiplied to serve a crowd.

For each cocktail, you will need:

Place on large ice cube in an old-fashioned glass, or any short drinking glass and add all ingredients.

Simple syrup is one part sugar to one part water, boiled, until sugar dissolves and then cooled.

You can get watermelon juice by whizzing some watermelon (minus the seeds, please) in a blender, or save the juice after you make a bowlful of watermelon balls to serve with this. Bartenders garnish the drink with some cracked black pepper, but if you don’t want the added heat, omit and garnish with a chunk of watermelon or a slice of lemon.

Well if you ever plan to motor west Just take my way it’s the highway that’s the best Get your... read more