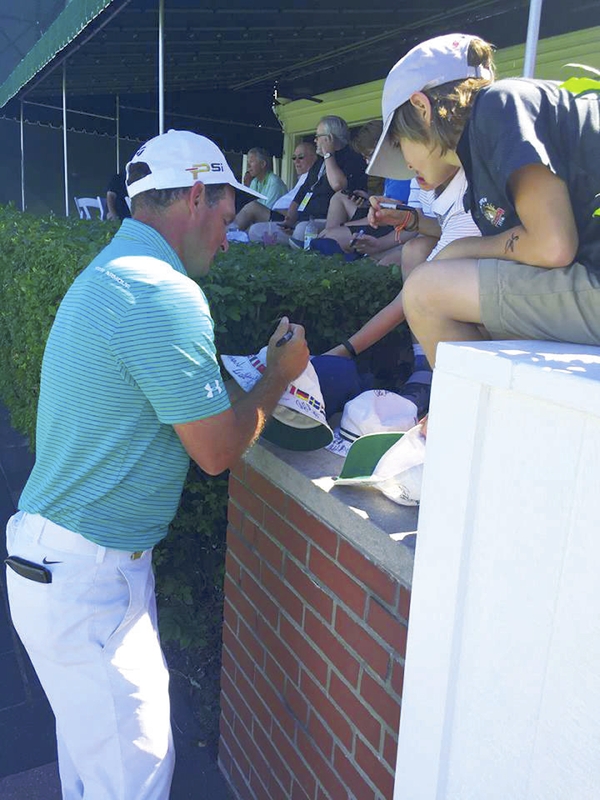 submitted photo ... Frank Adams III, of Salisbury, signs an autograph for a child on Tuesday at a practice round for the U.S. Open golf tournament in Oakmont, Pa. The first round is Thursday and Adams tees off at 2:42 p.m.

Oakmont returns US Open’s reputation as toughest test in golf

At least the U.S. Open that he grew up watching.

The record will show that Willett first played the U.S. Open in 2014 at Pinehurst No. 2, which had been restored to its original design by replacing the rough with natural sand areas, vegetation and wiregrass bushes. He also played last year at Chambers Bay, with its fine fescue grass that allowed the ball to bounce and roll like on a links course.

Those were a departure from the U.S. Open that over the years had been defined by narrow fairways, thick rough and firm greens.

And that’s the definition of Oakmont.

“I’m just looking forward to, I guess, my first U.S. Open on a golf course that I’ve notoriously watched growing up,” Willett said Tuesday. “Back to kind of how people see U.S. Open golf.”

Even with rain in the forecast ahead of the opening round Thursday, no one expects a winning score under par.

Defending champion Jordan Spieth played in unusually strong wind on Sunday and said he would have shot no better than 75 and then treated himself to a beer for a fine day of work. Ernie Els, who won at Oakmont in 1994, lamented rough so thick that not even the strongest players would be able to do more than get back into short grass.

The Masters brings excitement as the first major of the year on a course that metes out birdies and bogeys, eagles and double bogeys.

The U.S. Open at Oakmont?

“Trepidation,” Rory McIlroy said. “It really depends the venue that you play a U.S. Open at, as well. But yeah, this week it’s definitely not excitement. You know you’re going to be put under a lot of pressure on basically every single golf shot you hit out there. So you have to be prepared for that. You have to be prepared for how mentally demanding it’s going to be, how much concentration you’re going to need out there.

“It’s the toughest test in golf, and you know that,” he said. “And you have to do everything you can to prepare for that and try to do your best.”

This isn’t the longest U.S. Open course, not even close. Five of the par 4s are under 400 yards, an anomaly in this era of power.

Branden Grace described the opening hole as “horrible.” The closing hole is among the strongest in major championship golf, and Angel Cabrera’s tee shot down the middle in 2007 is still celebrated as one of the great drives under pressure in U.S. Open history.

The bunkers remind players of the pot bunkers in links golf, not so much by appearance but in penalty. The greens are reputed to be the fasted in the land.

“Some of the craziest greens I’ve ever played, and most penal fairway bunkers I’ve entered,” Rickie Fowler said. “It’s a fair golf course. You’ve just got to be on the right side of the hole. You’ve got to drive the ball well. A lot of characteristics of a typical, tough and hard U.S. Open.”

Grace found that out during one of his practice rounds over the weekend.

He was tied for the lead in the U.S. Open last year until hitting his tee shot on the 16th onto the railroad tracks and finishing two shots behind. He thinks he understands the philosophy of this major, so he was cautious in his approach. Safety first at a U.S. Open, right?

“If you lay up or you just go for the safer side to the right side and the pin’s tucked in the left, you might be dead,” Grace said.

He was playing the 13th hole on his first day of practice on Sunday. The pin was to the right and toward the front. Grace played it about 12 feet beyond the hole and to the left. He got up over his putt and said, “I couldn’t keep it inside 20, 25 feet.”

The toughest test in golf played on what is called the toughest course in America led to a short vocabulary for most players.

It’s going to be tough.

“If you took all the rough away, I still don’t know if anyone would break par for the week. Maybe they’d get close,” Geoff Ogilvy said. “You’re always trying to minimize damage instead of attack it.”

Most U.S. Opens, the setup dictates the scores you shoot. But I think Oakmont is just hard.”

Willett elicited a few chuckles when he described Oakmont as “great fun.” What appealed to the Englishman were the options players have on every hole, whether to take it on with a driver or lay back with something less to make sure the ball is in the fairway.

Grace wasn’t sure who it favored.