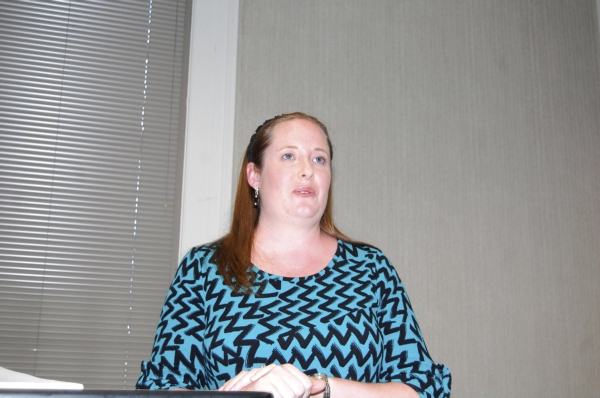 Ivy Rowe, the fair and tender lady, tells almost all Ivy Rowe is a remarkable woman. Created by Lee Smith for her novel in letters, “Fair and Tender Ladies,” Ivy was the focus of discussion at the second event of the Summer Reading Challenge last Tuesday at Rowan Public Library.

Tara Gilstrap, a visiting professor at Catawba College and director of its writing center, invited the audience to talk about the book, what went on between the lines and how Ivy’s life describes a time of change in Appalachia.

“Fair and Tender Ladies” is a one-sided story — Ivy’s side. “Smith is very intentional about this choice. It’s a very traditional form,” Gilstrap said. If you look at novels from the 1700s, the use of letters or diary entries to tell a story is much more common than it is now. “Dracula” is told that way. In modern literature, “The Color Purple” is told in letters.

“I see now some novels are all text messages or emails. I’m not sure I’m ready for that.” The audience grumbled in agreement.

“What challenges or rewards did this offer you?” Gilstrap asked.

“It was only her point of view,” Cindi Graham said. “It didn’t bother me,” but it left her wondering many things, like why Ivy’s brother Babe is so bad.

“You can see her evolving,” Martha West said. “It’s a fascinating story of her life.”

Gilstrap asked why Ivy had a pen pal, and Betty Mickle suggested it was because she wanted to find out about the world outside her own. When Ivy gets no response, she rants to her pal, but it shows she needs a confidante.

“The person we are is not the same with all people,” Jewell Mayberry said. “She tells certain things to certain people.”

She tells it all to sister Silvaney. “She has nothing to lose in those letters,” Gilstrap said. Silvaney is “afflicted” as they used to say, never educated, highly emotional, a wanderer.

Gradually, readers see Ivy’s growth, Gilstrap said, “as she finds her place in society. This is not just a coming of age story. We follow her until she’s an old woman, wandering the mountain.” She’s turned into one of the eccentric women she remembers from her childhood, including her Granny Rowe.

“But no one is excluded for being weird or ‘ruint’,” said Lucinda Epperson.

“She accepts it. She celebrates it and goes on,” said Diane Hundley.

Ivy always wanted to be a writer, but that dream was not to be. “But she IS a writer,” Gilstrap said. “In a way, she’s a failed artist.”

“Her daughter was punished for being successful,” Padgett said. Jolie loses her husband and her child is in trouble. Daughter Joli is a writer, who got to do all the things Ivy could not.

“I feel like Ivy’s life satisfied her,” Mickle said. Unlike Ivy’s mother, who worked herself into an early death.

“We see her struggling with depression, like her mother,” Gilstrap said. But then comes Honey Breeding, a bee man with a name no one could forget. Ivy’s wild affair with him up on the mountain, living in a cave, brings her out of a dark place, although she pays a huge price — the loss of another daughter.

All the names have meaning in Smith’s books, Gilstrap said. “Honey Breeding is just one of them. Her husband, Oakley is like an oak, tall, strong, forgiving.”

Because Ivy is writing the letters, we never learn what was going on with her family while she was gone. We just see the consequences. “If you step out of line, you will pay the price,” Gilstrap said. Ivy is a free woman, but her life is “sharply defined by men,” Gilstrap said, first her father, then Lonnie Rash, who ruins her (another telling name), Oakley who saves her and Franklin Ransom, the rich man who wastes his life.

Once they’re all gone, she’s freer than ever, even turning down a proposal from her late sister’s husband.

Gilstrap said women of that time had very traditional, prescribed roles, but there are plenty of examples of how women twist those roles, like Geneva, who is divorced and owns a successful boarding house, where she has several liaisons with men.

“It relates how many things are changing” on the mountain, Gilstrap said. The coal mines come, the holler gets electricity, people have jobs that don’t involve farming.

Hundley said Smith used world events “as almost freeing … the men went off and left the women to do as they pleased.”

Gilstrap said, in contrast, Ron Rash’s novels are about conflict between the old ways and the new, but for Ivy, development expands her world.

Smith uses the hierarchy of the coal mine to explain how things work. The single miners live in barracks at the bottom of the hill. Families have tiny houses above them. Supervisors are a level higher, and the owners are at the top. “Smith captures the idea of changing the way people live.”

At that point, Gildstrap said, the old ways are lost. People didn’t remember how to kill a pig or can the corn. “Now, we’re shifting back to those ways, to a degree.”

Ivy is never jealous of those higher up. She learned that money doesn’t make them happy, that it’s not a solution to their problems.

Mickle asked where the title came from, and Gilstrap played a version of the song, “Fair and Tender Ladies,” an old Carter Family song — “I wish I was on some tall mountain/Where the Ivy rock is black as ink/ I’d write a letter to my own true lover/ Whose cheeks are like the morning pink.”