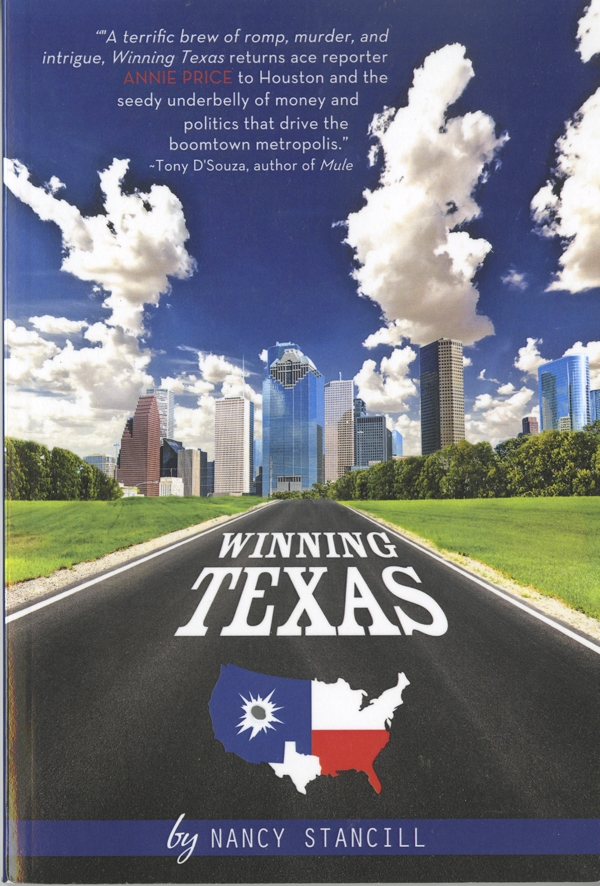 Texas can be a mighty dangerous place Stancill’s first book came out in 2014. Note the similarity to the cover of her 2016 book.

Stancill revisits reporter Annie Price from her first book, “Saving Texas,” which was about Texas secession and a determined group that would do anything to make the country of Texas a reality.

Now the issue is to declare certain counties German Texas in a nod to the heritage of the area. The idea is to teach German in schools, have signs in German, promote festivals, etc.

The subplot is about the dying newspaper industry. Annie is now a mid-level editor at the Houston newspaper, which, during the course of the book, loses two reporters, one who quits and the other …

The baddest guys from the first book have escaped to Mexico — Dan Riggins, the secessionist leader, and his girlfriend, contract killer Alicia Perez.

Annie also has to deal with ex-reporter Rob Ryland who just about killed her in her last adventure.

But that’s only part of it. Annie’s in charge of an investigative team which is trying to learn about the German Texas movement. They meet Sen. Sam Wurtzbach, a nice guy who wants recognition for his part of Texas. It seems innocent enough, but after the explosive secessionist crowd, everyone’s feeling a little suspicious.

And it’s with good reason. The effort arouses the interest of Riggins, so much so that he is willing to cross back into Texas, risking arrest, to do something about it.

He’s relying on his nephew, who happens to be the ex-reporter, and old friend Tom Marr to help him out. But Marr’s had it. He is out of the secession business and trying to raise his teen-age daughter, Betsy, by himself. And that branches off into another subplot involving strip clubs, which brings us back to the German Texas movement and Riggins.

The book starts with a body floating in the shipping channel at Houston’s port, but that, too, is another subplot which ties in strip clubs, human trafficking, German Texas and murder.

That’s a lot of balls to juggle. Stancill adds in not one, but three love interests for Annie: Her former lover Sen. Jake Satterfield, who returned to his pregnant wife after romancing Annie; Marr, who has held a candle for Annie ever since she connected with the child Betsy; and a recently divorced deputy. Marr and Satterfield actually competed for Annie in the past.

The deputy is merely a distraction or a character placed to prove Annie has poor judgment when it comes to men.

Meanwhile, back at the newspaper … new owners are coming in to change everything and every job is at risk.

Somehow, Annie must help one of her investigative reporters unravel the strip club/German Texas connection, find out if Riggins and his deadly girlfriend are back in action, track down the people in charge of the human trafficking and be available to a runaway Betsy.

Annie and her team face a plethora of danger, risking their lives for the truth, such as it is. The body in the water gets short shrift, probably because so much else is going on. And poor Annie is injured, threatened, dumped and likely to be unemployed.

At the end, things are not exactly rosy for all involved, with betrayals left and right, but it’s wide open for a sequel. Will Annie survive another run-in with a group of dangerous and determined characters? Will she even have a job as a reporter? She’s narrowed down her choice of men, but that could change, too.

Stancill has also been a reporter for the Houston Chronicle and has an MFA in creative writing. The grittiness of Houston inspires the first two books, and likely more.

An interesting note: The cover of “Winning Texas” is based on the same photo used on the cover of “Saving Texas.” The clouds and sky are the same, and a road runs right down the middle.