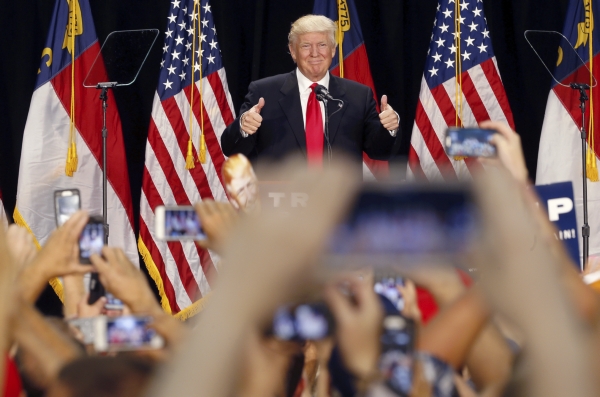 Republican presidential candidate Donald Trump reacts to the crowd as he arrives to deliver a campaign speech in Charlotte on Thursday. AP Photo/Gerald Herbert

Trump: I speak the truth

As a crowd of people streamed by, exiting the convention center, Vick said he felt inspired by the speech that wrapped up minutes earlier.

“I felt like I was being spoken to directly,” he said. “I feel like there will be a better future for my grandchildren. I really felt inspired.”

Vick, his wife Nancy and a group of several Rowan County residents had traveled to Charlotte on Thursday to listen to the latest of several speeches in the city by Republican presidential nominee Donald Trump.

“I speak the truth for you and for everyone,” Trump said in his prepared speech.

He addressed previous, off-the-cuff remarks that have drawn criticism. In the heat of the moment, people say the wrong things, and he admitted to frequently doing that. However, he pledged never to say something he didn’t believe. He promised to fight for all Americans.

One week ago, Trump drew sharp criticism after a speech in Wilmington for saying that “second amendment people” could prevent Democratic presidential nominee Hillary Clinton from appointing U.S. Supreme Court justices. During Thursday’s speech Trump said the media should spend more of its time focusing on issues such as poverty rather than dissecting his remarks.

“Every American will be treated equal, protected equal and honored equally,” he said. “We will reject bigotry and hatred and oppression in all of its forms and seek a new future built on our common culture and values as one American people.”

Rowan Republican Party Chairman Stephen Kidd, who was at Thursday’s rally, also attended a Trump event in Winston-Salem one month earlier. Kidd said Trump was more “on message” this time and the frequent, off-the-cuff remarks that draw criticism aren’t worrisome. The occasional scripted speech — Thursday’s for example — is good too, according to Kidd

“I think what you see from most politicians, like Hillary Clinton, is always orchestrated, it’s always been pre-planned and written probably not by herself,” Kidd said. “So, to see Trump focusing his thoughts and his messages in a timely and well-orchestrated manner helps him to get his point across better than it does if he’s just up there speaking his mind, rambling about different areas at different times.”

Kidd’s daughter Haley Blankenship can’t vote now, but said she was excited and prepared to vote for a second Trump term in four years.

On Thursday, Trump pledged to never put a campaign donor before a voter and emphasized he isn’t running for president for himself.

“It’s never been about me,” he said. “It’s about all the people in this country who don’t have a voice. I am running to be your voice.”

He attempted to appeal directly to the Charlotte crowd by noting how the North American Free Trade Agreement affected North Carolina. The state lost hundreds of thousands of manufacturing jobs, especially those in the textile industry that once populated the Piedmont. Former president Bill Clinton signed the deal and Hillary Clinton supported it, Trump said.

Trump said that Hillary Clinton owes North Carolina “a big apology” but that will come when America finally gets to see all of her emails.

Trump ended his speech with another popular refrain.

“We are going to make America great again, greater than ever before,” he said.

Earlier Thursday, Trump got in some target practice in Statesville, the Associated Press reported.

He stopped by the gun range of the local Fraternal Order of Police lodge in Iredell County before a scheduled meeting at the lodge with law enforcement officers.

He says Trump used an M4 gun often carried by law enforcement. Trump says he had “a little shooting practice.”

Trump is licensed to carry a hand gun in New York, but sometimes jokes that his eldest sons, both hunting enthusiasts, are better shots.

On a different subject, he told the officers that he’ll “take a very serious look” at congressional term limits if he wins.

SALISBURY — The filing period for the Rowan-Salisbury Board of Education ends today at noon. Three seats are up for... read more