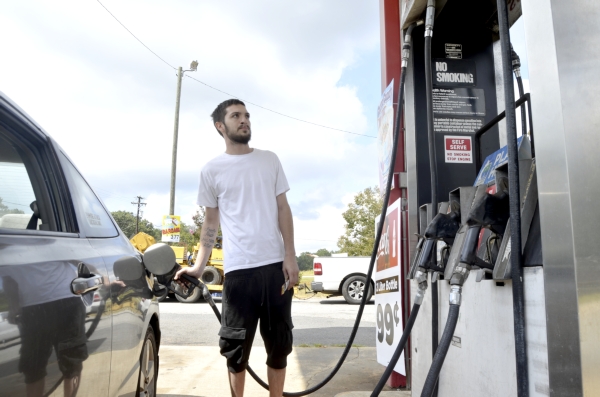 Dustin Stirewalt pumps gas Monday at Tobacco House on Airport Road. Stirewalt topped off his gas tank for the second time in two days after hearing fears of gas shortages in the area due to a ruptured pipeline in Alabama. Shavonne Walker/Salisbury Post By Rebecca Rider and Shavonne Walker

ROWAN COUNTY — Dustin Stirewalt topped off his gas tank Monday for the second time in two days. He wanted to do it, he said, before stations began running out of regular unleaded.

Stirewalt was not the only motorist making sure to fill up Monday or over the weekend in Rowan County. Many are fearful there won’t be any gasoline after an Alabama pipeline rupture late last week shut down the flow of fuel.

While operators work to repair the Colonial Pipeline, which carries gasoline to North Carolina and other Eastern states, local drivers are wrestling with higher gas prices and an exhausted fuel supply.

According to a press release from AAA, officials expect to restart the movement of gasoline, diesel and jet fuel from Texas and Louisiana refineries to a number of Gulf Coast and Southeastern states sometime this week.

Colonial Pipeline has said gas has been delivered or is on its way to terminal locations in North Carolina, as well as South Carolina, Tennessee, Georgia and Alabama. Colonial expects to have a bypass of the leak in place by mid- to late week.

While some service stations have experienced temporary shortages, many have received supplies and others have them scheduled for today.

Stirewalt traveled to more than one gas station this past weekend, he said, because some had no fuel or only premium grade. He made a stop Monday by Tobacco House, located at Airport Road, after learning unleaded gasoline was $2.15 a gallon. Stirewalt said at $2.15, it was among the cheapest he’s found.

Stirewalt lives in the area and said after going to a few stations on Saturday and Sunday, he decided to check a place closer to his home.

“I might as well get it now while it’s cheap,” he said.

Tobacco House staff said they expected to run dry in the next day or so, but weren’t worried since they’ve been assured they should receive fuel before the end of the week.

The parking lot of the Love’s Travel Stop off exit 71 was packed with cars filling up Monday afternoon. Several drivers at the pumps said they’d come there because the travel stop still had gas to sell — and at $2.09 per gallon of unleaded gasoline, had one of the cheaper prices in town.

Ray Morgan said there’s a gas station near his house, but gas was priced at $2.30 a gallon, so he came to Love’s.

“People have started to gouge,” he said.

Morgan said he’d heard about the pipeline break and decided not to wait until his fuel gauge hit empty before refilling.

“I gotta get to work the rest of the week,” he said.

Several gas stations around town had bags over the pumps, or paper signs that read, “Out.” While those shortages will only last until the supply truck comes in, Morgan said it was better to be safe than sorry.

“So I guess everyone better get it while they can,” he said.

Andrew Hochstetler said he heard about the pipeline break, but didn’t feel the need to rush out to get gas because of a potential shortage. He was however, getting gasoline at Jerry’s Shell on Jake Alexander Boulevard because he already needed it. Hochstetler is convinced the “shortage” he heard about is a “scam to raise gas prices.”

Attorney General Roy Cooper urged North Carolina consumers on Monday to report gas prices they deem unreasonably high. Since some area stations are reportedly running low, there is a potential for price gouging. Price gouging — or charging too much in times of crisis — is against North Carolina law.

Price gougers who violate the law can be fined up to $5,000 for each violation.

Brian Wease was just passing through, but he said that the prices he’d seen in Rowan County as he drove down Interstate 85 were cheaper than the ones he left in Rutherford County.

Bernie Herbert’s truck runs on diesel, and it was time for him to fill up, anyway. Herbert also mentioned several stations that were temporarily out of fuel, and he worried that the break would affect the price of diesel. He said he was disappointed in the price spike.

“Some places are charging the daylights out of ya,” he said.

Earlene Arquette said she chose to get gas at Love’s Monday because she knew it was one of the few places that still had gas.

Jerry Alligood, owner of Jerry’s Shell, said the reason for the gas shortage is because people panic, which then creates a panic among area motorists.

He said in some cases, the price of gas will increase because of the cost to get fuel to the stations. Tankers can haul about 8,500 gallons at a time, and moving it that way costs more than it would to run gasoline through the pipeline, he explained.

“We haven’t raised our prices and I don’t intend to. I don’t think that’s right,” Alligood said.

“It’s not a wholesale outage, just a reduction … in the amount being able to be delivered up the East Coast,” said Rowan Chief Emergency Management Coordinator Frank Thomason.

Thomason said there are stations across the county that are being resupplied on an intermittent basis or that may get a half tank.

For instance, in the case of Sheetz on Old Concord Road, the station was out of gas this weekend. The station received some fuel and was back in service but as of Monday was out of gasoline again, he said.

Thomason said Colonial Pipeline has two pipelines that run parallel. One typically delivers unleaded consumer-grade fuels and the second line delivers jet fuel or high-grade commercial fuel. They are batch mixing consumer grade in the No. 2 pipeline to keep it flowing, he said.

“It’s a reduction in the amount able to push up the pipeline,” he said.

The shortage being felt locally and statewide is because some people are scared, Thomason said, coupled with “some media hype.”

There are some people who fill every spare gas can they have, he said, and once that process is multiplied over and over, it leads to a shortage.

On Gasbuddy.com, an online fuel price tracker, drivers in Rowan County reported seeing prices from $2.05 to $2.59 on Monday. North Carolina’s average price of gasoline is currently $2.16, up slightly from last week’s average of $2.05, AAA reported in an e-mailed press release. Despite the recent increases, both of the Carolinas are still seeing gas prices under the national average of $2.20.

On Thursday, Gov Pat McCrory issued an executive order temporarily waiving hours of service restrictions for fuel vehicles traveling in and through the state in order to prevent disruptions and backups at major fuel distribution hubs. Friday, the governor issued a second executive order that waives additional trucking restrictions and protects consumers from price gouging at the fuel pumps. Both executive orders remain in place for 30 days or until they are canceled.

On Monday, McCrory asked agencies in North Carolina to consider ways to conserve fuel, and he activated the State Emergency Response Team to coordinate with counties regarding fuel needs.

AAA reported that once the supply issue is fixed, motorists will enjoy lower gas prices as supplies move into the winter-blend of fuel. Pump prices typically decline during this time of year due to lower driving demand after the busy summer driving season has concluded and the changeover from summer blend to a cheaper-to-produce winter-blend gasoline.

Upon completion of the bypass, it will take a day to test and get the pipeline back in operation. The company has also been able to use another line to offset the shortage due to the line with the leak. Colonial continues trucking and re-supplying gasoline to the areas that need it.

Anyone who believes there is potential price gouging in Rowan County can call the N.C. Attorney General’s Office at 1-877-566-7226.