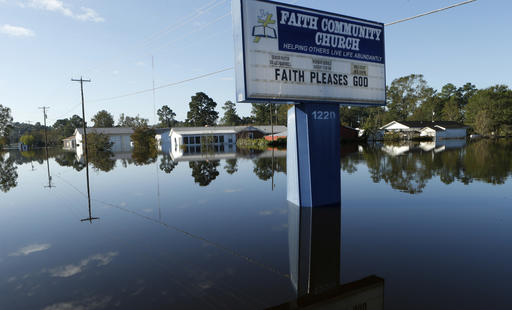 Floodwaters associated with Hurricane Matthew surround homes and a church sign in Lumberton in October 2016. The Trump administration denied 99 percent of the $959 million in federal funding that North Carolina requested for hurricane recovery.(AP Photo/Brian Blanco)

Just had to say something about this subject because it seems like I might be the only one who notices how CNN runs its biased stories.

When Hurricane Matthew came through, I am always interested in keeping up with what is going on. And, let me tell you, CNN will run any story straight into the ground 20 times over. So when the storm got to Florida, they were showing its effects on the area 24/7.

But about the time the hurricane got to Charleston, S.C., the famous Trump story broke out. Well, for the duration of the damage of Hurricane Matthew in the Carolinas, it was left up to us to guess what was happening because they sure thought it was more important to downgrade Trump than show the lives and property in our communities.

I watched our local news this morning to find out there were 20 lives lost and $10 billion in damages to just North Carolina.

I know it is important to elect our next president, but I think it could have been put on a back burner for what was fixing to happen to our great state in the coming days.

So thank you, CNN, on your coverage of Hurricane Matthew in North Carolina. I just wonder what stories the network will have to cover once the election is over. Whatever it is, I know CNN will run it in the ground as usual. Maybe it won’t be as biased as their election coverage has been.

This is a rebuttal to the misinformation Anne Corriher stated in the Salisbury Post letter to the editor on Oct. 13 (“Remember school-closing controversy when you vote”).

There is enough misinformation and misleading going on in other campaigns. I would hope that this school board race could be conducted with correctness and respect.

In Thursday’s Post, John Hood of the John Locke Foundation and NCSPIN wrote about having a long memory when it comes to North Carolina tax increases under the Democrats.

When it comes to sales tax, for the past four years, the Republican-controlled legislature has slowly but surely increased sales taxes for plumbing services, theater tickets, auto repairs, air conditioning, electricity, natural gas, dry cleaning and the list goes on. Even North Carolina nonprofits are now required to charge sales tax on admission fees.

These are taxes that hit harder on the poor and middle class, not the wealthy. What’s next, Republicans, Girl Scout cookies?

Sometimes we as human beings get into arguments with our friends and family and usually say things we shouldn’t have said. The big point is watch what you say.

I am guilty probably more than anybody else. You get angry and then say something that absolutely crushes someone’s psyche. Once you have said those mean and hateful comments, you can’t take it back. You could spend all day thinking about how you hurt somebody.

The bottom line is we should think about what we say, because we could hurt someone or we could save a life by cheering someone up when they are down.

Editorial: Leading and aging ‘in place’

People familiar with Rufty-Holmes Senior Center were happy but not surprised to learn that Rick Eldridge, the center’s executive director,... read more