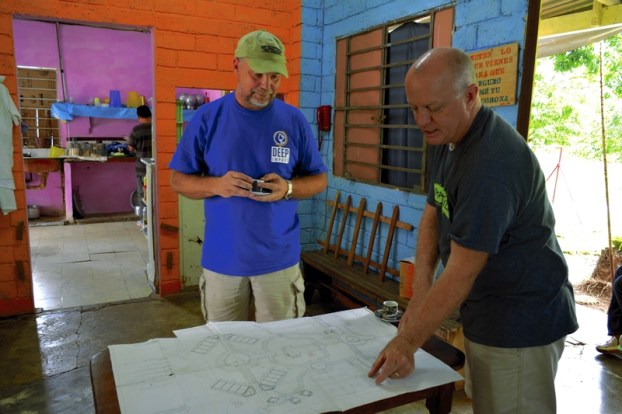 Paul Langston, left, and Tom Beam, staff members at N.C. Baptists on Mission, look over plans for the new seminary.

‘You can see the fruits of your labor’ — N.C. Baptists travel to Cuba In September, Susan Shinn traveled to Cuba with a group of 11 Baptist pastors and lay leaders for a visioning trip with N.C. Baptists on Mission.

It sounds like a beginning of a bad joke: Susan Shinn takes off for Cuba with 11 Baptist pastors.

The real truth is that it was actually 11 pastors and lay leaders, and we spent several days in Cuba in September on a visioning trip sponsored by N.C. Baptists on Mission. If you know me, you might wonder how a good Lutheran like me got hooked up with these Baptist brethren. It’s pretty simple, actually.

My first cousin, Tom Beam, who lives in Fuquay-Varina, is student missions consultant for N.C. Baptists on Mission — formerly known as N.C. Baptist Men. Cuba is one of his primary areas of responsibility, and he goes there several times a year, both for planning and leading mission trips.

The last couple of years or so, I’d been asking him — perhaps “pestering” is the better word here — to take me along as his reporter. At the beginning of the year, he did just that. He was taking two groups of pastors and lay leaders to Cuba in September, he said, and asked if I wanted to come. Wow, did I ever!

As you know, diplomatic relations between the U.S. and Cuba have warmed somewhat during the Obama administration, and the U.S. Embassy reopened there in 2015 for the first time since 1959. So I was eager to experience Cuba before the influx of American tourists occurred.

What we found was a beautiful country with warm and friendly people. We also found crumbling architecture, and poverty. We also found a country still dominated by a communist regime. I felt like I had to dial it way back during my visit, not just because I was with a bunch of Baptists, but because it was a place where your every move is being monitored — whether or not you realize it.

At no time, however, did I ever feel unsafe or unwelcome.

We had precious people who served as our translators — Neida, Alex, Leslie, and Winston. On the Sunday many of the men — I was the sole female in our group — went out to preach, a woman named Ruth met us at Pastor Rene’s church, First Baptist Church of Santa Clara.

Even though no churches may be built in Cuba, they may be renovated. And house churches and church plants are springing up everywhere. Indeed, the main purpose of our trip was to visit a camp in Santa Clara — My Camp — and learn about the plan for mission groups to transform it into a seminary. In eastern Cuba, where the Eastern Baptist Convention is active, there are far more churches than there are pastors available. The camp needs to be a place to train church leaders.

The plans are modest. With about a $100,000 budget, N.C. Baptists on Mission plan to build or renovate several buildings. The buildings at the camp are now very basic, but plans include the construction of dormitories and classroom buildings. Each mission team that comes to work at the camp will contribute $3,000; N.C. Baptists on Mission will contribute another $2,000. So Tom estimates that five teams could build one building.

Additionally, the project will employ Cubans to assist with construction after each team leaves. That’s hugely important as average monthly wages in Cuba are $30.

“Most of our generation is living abroad,” Winston told us. “The future is not here.”

Our group was also able to contribute money to our translators, who stayed with us for our entire time in Cuba. They were especially important on Sunday, translating sermons. I was sitting beside Ruth during our visit to First Baptist in Santa Clara. We got to the part of the service during which Pastor Rene was talking about the weekly Bible study, and listing members who were sick or in the hospital. To be honest, I wasn’t paying much attention because I wouldn’t be there to attend the Bible study, after all. Suddenly, I heard my name.

Ruth said, “Pastor Rene wants you to come up and pray for the sick.”

Luckily, I’d been a lay assisting minister at my church, St. John’s Lutheran in Salisbury. But I’d never prayed with a translator. This turned out to be a double blessing, as I had time to think about what I’d say next while I waited for Ruth to translate for me.

After church, and after a delicious lunch that Pastor Rene’s wife Shelly cooked, we dropped off Leslie on our way back to camp. She and her husband pastor a house church. Tom gave her the money the group had given for the translators, and she didn’t want to accept it.

“I work for the Lord,” she said, but Tom told her it was perfectly OK to use for her church. That pleased her, and we continued on our way back to camp.

The main purpose of these two visits was to learn about plans for a new seminary in Santa Clara. N.C. Baptists on Mission works closely with the Eastern Baptist Convention. Because there are more churches in Eastern Cuba than pastors available, the need for a seminary to train church leaders has grown.

The Eastern Baptist Convention has some 590 church buildings — none have been built since 1959 — and more than 5,000 house churches.

In 2002, the Baptist World Alliance helped N.C. Baptists on Mission to identify work to be done in Cuba. At that time, mission groups were beginning to be allowed to work in Cuba. Its first big project was the construction of a retirement home for pastors in Santiago. Now, North Carolina Baptists are ready to tackle the seminary construction.

According to Paul Langston, mission consultant for N.C. Baptists on Mission, goals for late 2016 through spring 2017 for Santa Clara camp include:

• construct a two-story house for nurses, pharmacy, and residence hall

• participate in evangelism and other community ministries alongside Cuban believers

• assist in the development of the seminary from the ground up, which could later include teaching.

“We wanted to do what it would take to bring students here quickly,” Beam said. “We anticipate six teams to finish the first building.”

Each team will contribute $3,000 with N.C. Baptists on Mission — formerly N.C. Baptist Men — sending another $2,000. Additionally, the projects will employ Cubans who will continue the work after teams leave, Beam said. This is a critical part of the project as the average monthly wage of Cubans in $30. Physicians make $50 a month, Beam said, while teachers are paid $35 a month.

Because of that reason, Beam explained, the black market is a way of life in Cuba, as rationing is woefully inadequate. The teams are concentrating their efforts in central Cuba — where the seminary is being built — because that is the most unchurched area of the country, he said.

During the trips, group members toured the camp, and learned the specifics of projects available there. Beam also explained the nuts and bolts of leading a tour group, recruiting team members, when to apply for passports and visas, and more. Beam estimates the trip costs to Santa Clara to be about $1,700 per person, but that amount may decrease as commercial and direct flights to Cuba increase.

Not only are work trips available, Beam says, but there are also opportunities for youth teams to lead camps, with activities similar to Vacation Bible School and sports camps.

Traveling to a Communist country, Beam admitted, is not easy. “There are some challenges we face in Cuba that we don’t have in other places. But we do try, within the parameters we are given, to offer a ministry in Cuba.”

He added, “Sometimes Americans say, ‘There’s a better way.’ Not in Cuba. You do it the Cuban way. We’re not gonna push the envelope. That would close the door on religious visas.”

Despite the challenges, Beam said, he returns to Cuba, “because people come to know the Lord. If I reacted to frustrating moments, I would have been done in Cuba a longtime ago. People are being discipled and truly living for the Lord, and that makes a difference.

In Cuba, you can see the fruits of your labor.”

Langston returned to Cuba in mid-October in the wake of Hurricane Matthew. The area around Santa Clara was not affected, but areas in far eastern Cuba were. In fact, the church on the back of the yellow T-shirt of the N.C. Baptist Partnership worn by both travel groups, First Baptist Church Baracoa, was destroyed.

Langston and his group saw about 20 damaged churches, house churches and pastors’ homes in Baracoa and Maisi. They distributed 200 bag water filters to pastors to distribute in their communities. They trained on two types of water filtration systems donated by North Carolina and Texas for Cuban churches to use in communities hardest hit by the hurricane, and they took three small generations to run the water filtration systems.

Even though hurricane relief efforts will continue during the next several months, Langston said, the plans for the new seminary will not be affected.

Lynna Clark: Eyes on Him

My beloved David is a Bible scholar. Even as I use the words I know that he would protest the... read more