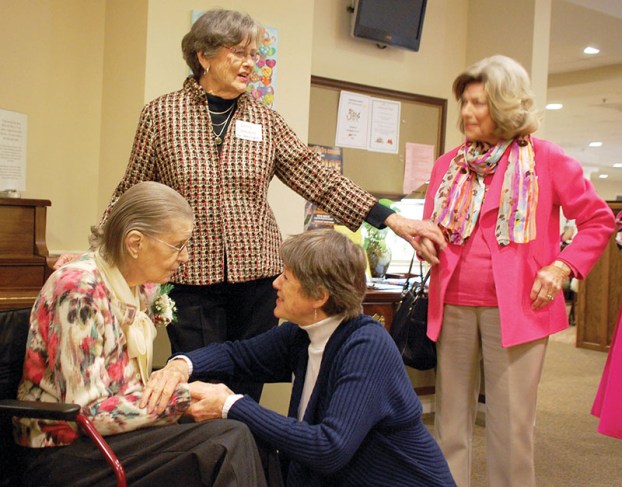 SALISBURY — Before Thursday’s Salisbury Symphony Guild lunch, which was held at Trinity Oaks to honor her, Mary Messinger sat in a small reception area close to the dining room and met a stream of well-wishers.

“If it wasn’t for you,” guild member Lyndia Heward told Messinger, “we wouldn’t have a symphony guild.”

“If it wasn’t for me,” Messinger added, “we wouldn’t have a symphony period.”

Truer words are hardly ever spoken.

Salisbury Mayor Karen Alexander, who was on hand for the luncheon, proclaimed Thursday as “Mary Messinger Day” in the city, honoring Messinger’s steadfast dedication to the symphony orchestra, its governing society and the guild.

From its beginning 50 years ago, Messinger devoted herself to the symphony and making it one of small-town Salisbury’s bragging points. In a recent story in Salisbury the Magazine, Executive Director Linda Jones called Messinger “the mother of the symphony.”

Besides holding key offices, Messinger has headed campaign drives, sponsored concerts herself, helped in the hiring of conductors and been a force behind all the fashion shows, receptions, educational programs, special concerts, publicity and other community outreach through the years.

“They said it would never last,” said Messinger, who recently observed her 93rd birthday.

Words used to describe Messinger Thursday, from friends and within the mayoral proclamation, included “vibrant,” “brilliant,” “determined” and “endlessly kind and unassuming.”

Alexander said she is a treasure and legend within the community.

Messinger did not know until minutes before Thursday’s luncheon that she was being honored.

“I didn’t know it had anything to do with me,” she said. “… I am completely surprised.”

At the luncheon itself, Messinger thanked everyone and added, “I love my group (the guild), I love the symphony, and I love David (Hagy, the conductor).”

Hagy said Messinger was a shining example of what a woman in a small Southern town can achieve.

“Mary is responsible for all of that,” Hagy said. “If she had not decided to form the guild, it would not have happened.”

In 1976, Messinger, Susan Ketner, Karliss Virtue and Beth Sowers met at the home of Blanche Robertson to create the organization that would become the Salisbury Symphony Guild.

The guild started with 10 charter members, and it would grow over the years to more than 200 members.

“She has been both a mover and shaker, as well as a major benefactor in this community throughout her life,” Hagy said.

Sitting at the luncheon’s head table with Mary Messinger were her sons Dyke and Tim and daughter-in law Deborah. Mary Messinger was married to the late Dick Messinger, a onetime Rowan County commissioner and executive with Power Curbers.

Mary Messinger was born to John and Ruth Henderson in Sewickley, Pa. She graduated from Tufts University as a physical education major.

The guild presented Messinger with a blanket for the winter months ahead — an appropriate gift for someone who always had the symphony covered.

Edds makes his pitch for community collaboration to Granite Quarry

By Mark Wineka mark.wineka@salisburypost.com GRANITE QUARRY — Greg Edds, chairman of the Rowan County Board of Commissioners, continued what you... read more