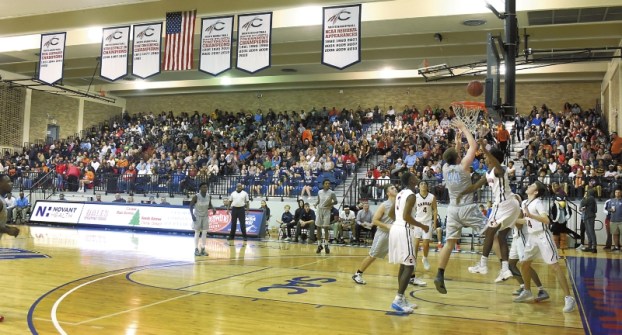 SALISBURY — You had a feeling the basketball gods were smiling on West Rowan’s boys basketball team Friday night when Kortez Weeks buried a 55-foot shot that narrowly failed to beat the first-half buzzer at Goodman Gym.

But in case you didn’t, teammate Darius Kure convinced you when he drilled a 70-footer that counted as the third quarter expired, helping lift the Falcons past Carson, 87-77, in the Dale’s Sporting Goods/Sam Moir Christmas Classic championship game.

“After Kure’s shot, we knew it was our night,” senior Paris Hillie said after the fourth-seeded Falcons (8-3) completed a perfect week and captured the school’s eighth tournament title. “How could it not be? That was crazy unbelievable.”

West stamped its signature on a masterpiece by sweeping past defending champion North Rowan, top-seeded Salisbury and No. 2 seed Carson (9-4) on successive nights. Three Falcons were selected by the media to the all-tournament team and junior Caleb Mauldin — the team’s 6-foot-8 chairman of the boards — was named MVP after scoring 24 points and reeling in 14 rebounds.

“This isn’t my trophy,” Mauldin said afterward. “It belongs to the whole team. They’re all MVPs, not just me.”

“Owen was on fire. I wish we could have gotten him a couple more shots at the end of the game,” Carson coach Brian Perry said after White knocked down seven 3-pointers. “Jailen, as always, did a great job. Big-time performers hit big-time shots.”

No one played bigger than Mauldin. Despite some foul trouble that kept him handcuffed to the bench for much of the third quarter, his was the face that kept showing up at both ends of the floor. He routinely established position near the basket, received clean passes from Hillie, Kure, Weeks and Austin Love (13 points, 11 rebounds) and kissed the ball of the glass for layups. And everything he threw up, it seemed, was caught by the net. On defense, Mauldin denied access to the lane and forced Carson to make an extra pass or two.

“He’s put in the time, put in the work and now he’s being rewarded,” West coach Mike Gurley said after winning his sixth Christmas tournament title. “He goes to the basket strong and he keeps his body composed. In the past, he’s gotten off-balance or tried to spin for a shot. Not tonight. He had a whole ‘nother thing going on. He was running and doing great stuff.”

West rode Mauldin’s broad shoulders to a 42-31 halftime lead and went up by 15 early in the third quarter when Tyrese Lawrence — his replacement after he was whistled for his third personal — drove the right baseline for a layup. Carson responded with a 10-0 run, fueled by sophomore Cole Perry’s 3-pointer and Jamarius Hairston’s three-point play. With just seconds on the clock, the Cougars inched as close as 59-56 on a bucket by Williams.

Instead, the next one was straight out of Ripley’s Believe It or Not — Kure’s long-distance connection from behind the Carson free throw line. “An amazing shot,” said Weeks.

Maybe so, but White was the best pure marksman on the court. He hit from the corners, the top of the key and probably could have connected from the parking lot.

“I don’t know how you defend that,” said Hillie. “He was shooting from the dead zone and hitting, shooting the strings of the ball.”

The fourth period saw Mauldin score his last 10 points and the Falcons convert 11 of 12 free throws. Love added a put-back that made it 81-75 with 1:31 remaining and Weeks sank four straight from the line.

“It was a great week for us,” Gurley concluded. “I’m mostly proud of the effort of this team. They never let up and never lost composure. Think about this: we won seven games all of last year — and just won our eighth. We feel pretty good about that.”

So do the basketball gods.