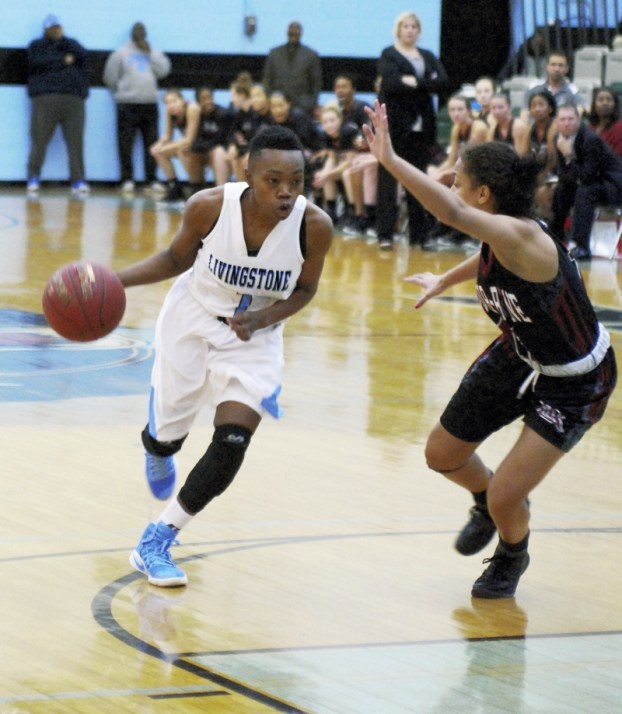 SALISBURY — It’s not every day that a math problem ends with an exclamation point — but that’s how the Livingstone’s women’s basketball game unspooled Monday afternoon at Trent Gym.

For various reasons, the Lady Blue Bears had only eight players in uniform, but each made a contribution in a 76-61, non-conference victory against visiting Lenoir-Rhyne.

“The good thing about having only eight players,” noted first-year coach Tiffany Silver, “is that they’re ready when there’s an opportunity to play. They’re in shape. They’re conditioned for this. It’s become more of a benefit that a detriment.”

So far it’s working. Livingstone (5-7) has won two-straight games with three CIAA home matches scheduled in the next week.

“The CIAA needs to look out for that team when they come in here,” L-R coach Katie Pate said after her squad fell to 7-5. “You get no possessions off against them. They demolished us in every single category.”

It was more deliverance than dominance. LC shot a pedestrian 41 percent from the field, but forced 26 turnovers and made eight of 17 three-point attempts, including two apiece by Bria Patterson, Zena Lovette and Deonna Young.

“We’ve got what we’ve got and we’re working with it,” Young said after topping all scorers with 20 points. “It’s a new year and a new team. We’re definitely better than our record (indicates). We’ve lost games we should have won. But today our seniors stood up for us.”

Patterson — a scrappy, 5-foot-5 guard from Florida — stood tallest. Livingstone was nursing a 35-30 halftime lead when she launched a 3-pointer from the left corner to launch the third quarter. Teammate Brittany Taylor followed with an off-balance layup before Patterson turned a spin move down the lane into a highlight-reel layup. LC’s 10-0 scoring spree was capped when Patterson — who made only three baskets — connected on her third, another splashdown from the corner that transformed a close game into a 45-30 lead.

“The stats don’t support what Bria did for us,” said Silver. “The shots she hit were huge, right in rhythm, in the right place at the right time. That’s what seniors do.”

Taylor, another senior, shot 5-for-10 from the floor and scored 10 of her 16 points in the second half. Her last bucket was a 3-pointer from the top of the key gave LC a 65-52 advantage with 3:27 to play. “Just energy and communication,” she said afterward. “Having only eight players has brought us together. We’re all we’ve got and right now, we’re all we need.”

Pate won’t argue with that. “Deonna Young played out of her mind against St. Andrews (a 101-59 LC win Dec. 30) and just did the same thing to us,” she said. “I’ll take their eight players right now.”

She’d have a hard time snatching them from Silver. “We’re moving into the new year facing a very good direction,” she said. “We needed this. We needed to believe in ourselves.”

That’s a math problem she’ s happy to tackle.

NOTES: Livingstone was down to six players by game’s end. Both Patterson and reserve Cherokee Cardriche fouled out in the fourth quarter. … Sophomore guard Zena Lovette had a quiet game but made a loud contribution. She finished with 13 points, 13 rebounds, four assists and four steals. … It marked the first time all season that LC has outscored an opponent in the third period. … The Blue Bears host Elizabeth City State on Thursday, Virginia State on Saturday and Chowan next Monday.