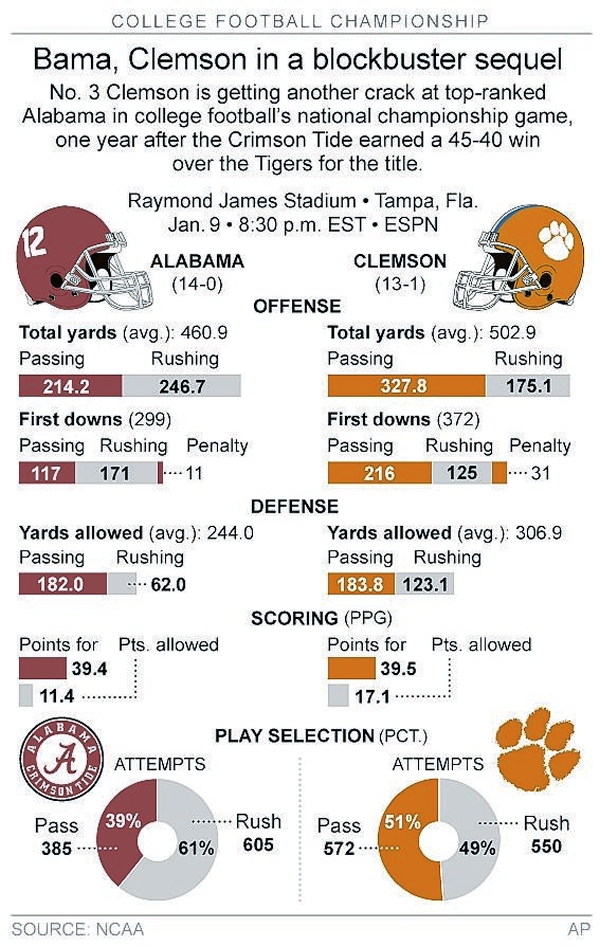 These smooth operators have been together since they were Tiger teammates, and they have history.  In a joint effort some 15 years ago they kept one of Jeff’s dad’s Jet Skis from sinking at a lake outing.

“I want to say we got a rope caught up in the intake valve and it almost sunk,” Elliott said, smiling.

Elliott and Scott also have kept Clemson’s offense afloat since taking over two years ago from the Tigers’ frenetic coordinator Chad Morris , who brought in Clemson’s quick-strike, fast-pace attack until becoming SMU’s head coach after the 2014 season.

Clemson coach Dabo Swinney said he had about “1,000 texts” from people telling him who he should hire. Instead, Swinney picked his guys.

“After all, I raised them,” Swinney quipped.

The partnership has worked extremely well these past two seasons considering Clemson is playing for the national championship for a second straight year. The third-ranked Tigers (13-1) get a rematch with defending champ No. 1 Alabama (14-0) on Monday night in Tampa, Florida.

Scott said he and Elliott work well together because neither one’s worried about the spotlight or grabbing credit.

“We don’t have one guy that’s up there, trying to get all the attention and be in the national news,” Scott said.

Crimson Tide coach Nick Saban has done his best to quash any drama, saying Sarkisian has complete knowledge of the offense.

“He knows the system inside and out,” Saban said Wednesday.

Few know the Clemson culture like Elliott and Scott.

The two were walk-on receivers under Tommy Bowden starting in 2000. Elliott started four of 44 games in his career and rose to team captain in 2003. Scott spent his time largely on special teams as a holder who was occasionally called for fake kicks.

Elliott and Scott grew close as teammates because of their similar circumstances, although their paths diverted after graduation. While Elliott began an corporate track as an industrial engineer at Michelin North America, Scott took up the family business — father Brad Scott was South Carolina’s head coach from 1994-98 and was an assistant for Bobby Bowden at Florida State and son Tommy at Clemson.

They reconnected with the Tigers when Elliott, whose last receivers coach at Clemson was Swinney, felt the coaching tug while at Michelin. Swinney counseled him to do what his heart told him and Elliott became an assistant coach at South Carolina State in 2006.

Elliott joined Clemson as running backs coach in 2011. He and Scott, at Clemson since 2008 as receivers coach at recruiting coordinator, soaked up as much as Morris gave them about playing-calling.

So once Morris left, Swinney quickly filled the void from within.

“There was an unknown,” Scott acknowledged. “It’s like whenever you get married, you love your spouse, but what’s this going to look like.”

On game day, Elliott is in the press box calling plays with input from all staffers. Scott is on the sidelines as a point of contact for players. So far, the Tigers are 27-2 with that system in place.

All three led the Tigers to a 31-0 victory over Ohio State in the Fiesta Bowl last week.

“They are cutting edge. They’re innovative,” ESPN analyst Kirk Herbstreit said. “I thought the game they had against Ohio State is a classic example of what they’ve been able to do in attacking a team’s weaknesses.”

Elliott believes his comfort and friendship with Scott have kept Clemson on track for its goals. Players see the coaches working together and that makes them want to think team first instead of themselves, Elliott said.

“Everybody knows what the plan in because we’ve done it together,” he said.

Pistons hold off Hornets as last shot not allowed

By Noah Trister AP Sports Writer AUBURN HILLS, Mich. (AP) — It was a shot that would have been replayed... read more