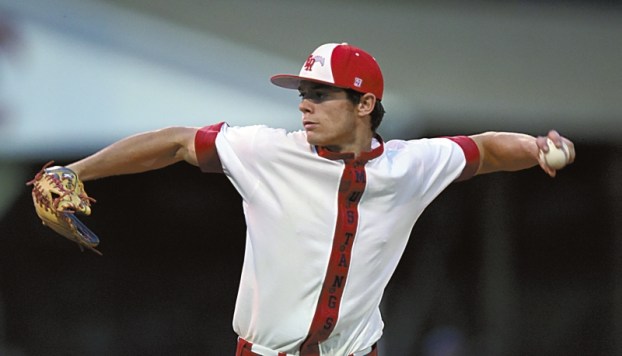 Wayne Hinshaw/for the Salisbury Post ... East Rowan’s Hayden Setzer had a big performance in the championship game of the Spring Break Classic at Staton Field on Tuesday night. Above, Setzer, the winning pitcher in the 12-2 victory, fires toward the plate. Wayne Hinshaw/for the Salisbury Post
East Rowan’s Hayden Setzer had a big performance in the championship game of the Spring Break Classic at Staton Field on Tuesday night. Setzer is shown after sliding in home to score as West Rowan catcher Trevor Atwood defends.

GRANITE QUARRY — Open the display case at East Rowan and make room for another baseball trophy.

“It was a beautiful day to play baseball,” winning pitcher Hayden Setzer chimed at Staton Field, where East (15-7) and its simmering lineup swept through the tournament. “And even better because we won.”

East coach Brian Hightower pushed to change the Easter weekend tournament from last year’s round-robin format to an actual competition. “We wanted to give everybody something to play for,” he said. “Every game means something.”

This one meant East will enter the final week of the SPC regular season riding a three-game winning streak. And it meant West (16-5) has some regrouping to do if it wants to win a third consecutive league title.

“We haven’t had a game like this all year,” coach Seth Graham said after the Falcons were mercy-ruled for the first time. “I hate that it showed up tonight, in this situation. This was for county pride. We’ll see what the boys are made out of now.”

East out-hit West 13-6 and jumped to a four-run lead in the top of the first inning. Facing left-hander Daniel Durham, the Mustangs opened the game with four straight hits — base hits by Chandler Blackwelder and Nathan Hill sandwiched around bunt singles by John Owen and Setzer.

“Any time you come out against a pitcher you’ve already seen, you’ve got to expect dead-red fastballs,” said Hill, who knocked in East’s first run and another two in the top of the sixth. “We were ready for him.”

With one away in the first, East’s Bryson Wagner laced a two-run double down the right-field line before a sac fly by Matthew Mathis made it 4-0.

“I think we lost the game in the first inning,” Graham said. “We gave up two bunt hits. For a team that takes pride in its defensive play, that wasn’t good. After that we just couldn’t get going.”

West made some noise in the last of the first when it scored both of its runs against six-game winner Setzer. Austin Love and Brandon Walton delivered singles, Trevor Atwood hoisted a sacrifice fly and Payne Stolsworth slapped a one-out, run-scoring hit to left.

“I had a little bit of a control issue in the first,” Setzer said after yielding six hits and striking out eight in five innings. “It certainly wasn’t the best I’ve ever pitched. When I was able to throw strikes where I wanted, they were effective and we got the outs we needed.”

It was a 6-2 game in the fourth when Setzer deftly eased out of a tight spot. West’s Mykal Berger drew a leadoff walk and Logan Sproul legged out an infield hit. When a balk moved both runners into scoring position with none out, the Falcons were poised to trim their deficit.

“If they get a base hit right there, it’s 6-4,” Hightower said. “That changes how you play the rest of the game.”

Instead, Setzer reared back, struck out West’s next three batters and escaped unharmed.

“I knew we needed to make something happen,” he said after his 101-pitch adventure. “I just settled down and did what needed to be done.”

East cracked the game open in the sixth and final inning. Facing right-hander Brett Graham — the third of four Falcon pitchers — the Mustangs sent 10 batters to the plate and scored six runs. Most damaging were Hill’s two-run single to left and a bloop hit to center by Mathis.

“We came out here and played three games the best we could,” Owen said after East scored 33 runs in three tournament games. “Our bats came alive. That’s our plan for next week — to keep the bats rolling.”

NOTES: Owen went 3-for-3, reached base four times and scored three runs. Hill went 2-for-4, raised his batting average 19 points to .237 and upped his RBI total to 14. … Reliever Colby Myrick pitched a 1-2-3 seventh for the Mustangs, the game’s only perfect inning. … West’s pitching staff had allowed only 23 earned runs all season before surrendering 10 last night. … Both teams return to SPC play next Tuesday. West plays at Cox Mill and East visits Central Cabarrus.

So close: Carson one run short of tournament victory