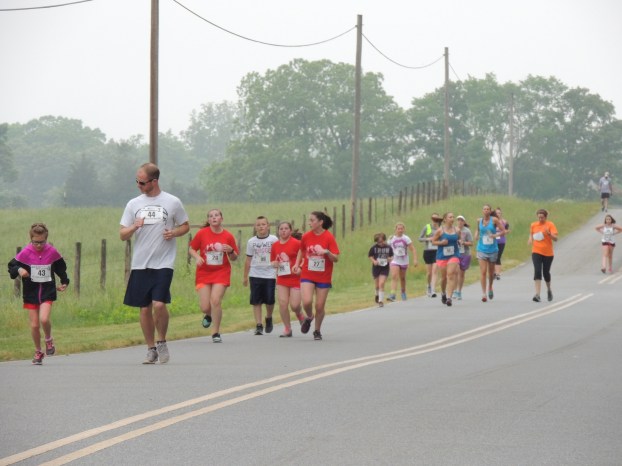 MILLBRIDGE — If you decide to take a Saturday morning drive through southwest Rowan during the last weekend of April, you might find an interesting sight. The roads, with their hills and scenic views are popular for weekend cyclists and runners, and locals know that getting behind a tractor and farm equipment is a normal traffic delay.

On April 29, the traffic delays have nothing to do with tractors or even weekend warriors. A 3.1-mile loop along the roads surrounding Millbridge Elementary will be filled with students in grades third through fifth who participate in the Millbridge Elementary running club and choose to participate in the school’s annual 5K. Every year, students as young as 8-years-old train and run in the race.

The course begins at the school and makes a loop following along Millbridge, Brown and Patterson roads, and ends with a scenic trek passing by a beautiful red barn.

Christa Graff, school counselor for Millbridge, heads up the running club. An avid runner herself, Graff helps to promote healthy choices for the students in the school. The running club, started back in 2012, was a way to get kids moving. It provides students with the opportunity to set goals, establish healthy routines and stay active.

While some schools do the “Girls on the Run” program, Graff wants to make sure that the opportunity remains open to all third- through fifth-grade students at the school. There is no fee involved with participating and the only requirement is a physical and pair of sneakers.

The school does a practice fun run lap around the school the day before the race and all students, even those who don’t participate in the running club or the 5K, have the opportunity to run. For some students, participating in running club is almost a Millbridge Elementary rite of passage.

Another big part of the running club is the camaraderie that exists among friends, family and staff. The students encourage one another and push each other as they make laps around the school on Wednesday afternoons when the club meets. Many students even run together on race day and line up at the finish line to cheer each other on for the final steps. Several teachers and parents help out with practice when the running club meets and even former running club members have come back to help. Several staff members come out to run or walk and bring family members along to participate in the race, including fourth grade teacher Regan Wike, who has completed the race alongside her mom, dad and fiancee.

Graff sees this camaraderie as one of the big benefits of the club and the race itself, noting that students often encourage family members to train and run. This has a ripple effect shifting the focus from afternoon and weekend screen time to physical activity and outside time with family.

The 5K event is also a fundraiser opportunity for the school’s PTA. Lori Blackedge, PTA treasurer, says that while the event does bring in funds for the group, it’s more about a time for the community to come together to support each other than raising money. Jennifer Ritchie, race director and speech pathologist at Millbridge, said she likes that the 5K is a culminating event for students, providing the opportunity for them to set and achieve a goal — one that can be difficult for even adults as well.

The 5K is a school community and Millbridge community event, as the race brings out participants not directly involved in the running club. The Salisbury Rowan Runners group helps by assisting with promotions, setting up the course and keeping race times for the event.

By Rebecca Rider rebecca.rider@salisburypost WOODLEAF — It’s hard not to move to the beat. The music blaring from a speaker... read more