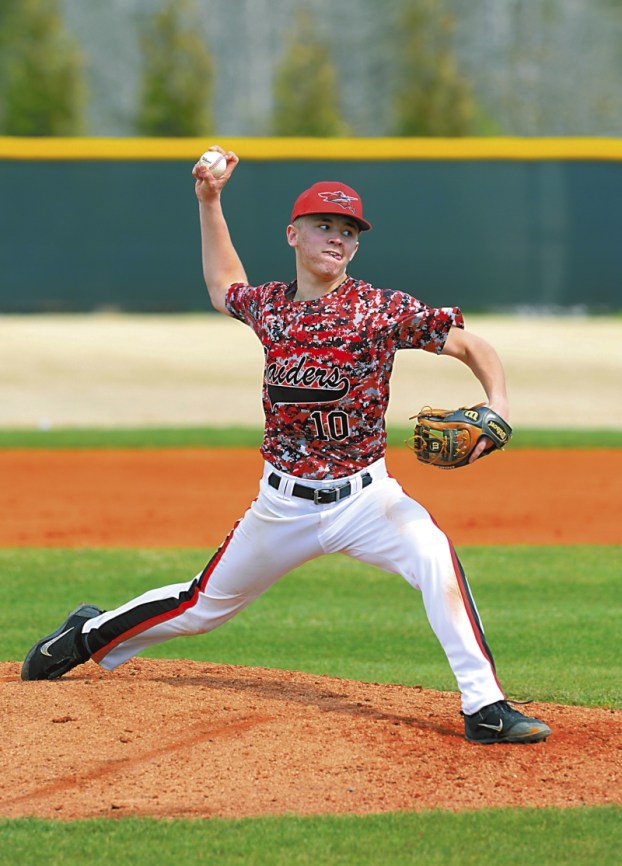 LANDIS — South Rowan starting pitching? At the moment it’s a solution looking for a problem.

The Raiders received their second complete-game shutout in as many nights Wednesday when Walker Joyce worked his magic in a tidy four-hitter, keying South’s 5-0 win against visiting Hickory Ridge in the South Piedmont Conference Tournament semifinals.

“They’re the same guys we’ve had all year,” coach Thad Chrismon said after South (17-9) earned a championship-game match Friday night at Carson. “It’s just that we’re executing, playing good defense and not making as many mistakes. We’ve grown all year and learned from each mistake. This is where it’s gotten us.”

South is there because Joyce treated the game like his personal property. The senior right-hander braided an upper-crust fastball with a tantalizing curve that swept across the outside corners — bulldozing his way through the Hickory Ridge lineup and leveling everything in his path.

“Yeah, but I’ve been doing this all along,” Joyce said with a post-game shrug. “Putting up goose eggs. But I guess for us to do it two games in a row in the conference tournament, it looks like it came out all of a sudden. We should have been pitching and playing like this all season.”

It came 24 hours after teammate Tyler Shepherd blanked East Rowan on six hits in the opening round. Joyce needed 104 pitches to gain his seventh win in eight decisions. He didn’t allow a hit after the fourth inning, struck out the side in the sixth and seventh and pushed South within one victory of its first conference tournament title since 2003.

“When he’s confident like that, you have to trust him,” South catcher Jarrid Nelson said after Joyce rang up 10 batters like he was handing out business cards. “Walker always pitches good. He hit his spots and was in command on the mound.”

Joyce, who walked none and fired first-pitch strikes to 19 of 27 hitters, was also pretty handy with the bat. He drove in South’s first run with a first-inning, ground-rule double that plated Austin Chrismon, who tripled on losing pitcher John-Riley Hathcock’s third pitch of the game.

“JR did all right,” Hickory Ridge coach Branden Knapp said after the Ragin’ Bulls (11-13) were ousted from the tournament. “We didn’t really help him out. We had two costly errors that should have been double plays.”

Hathcock allowed four earned runs in six innings and was tagged for four extra-base hits. He struck out eight, walked one and threw three wild pitches. South reached the senior right-hander for three pivotal runs in the bottom of the second. The first scored on Nelson’s bloop single to right field and another when outfielder Dawson Larrimore steered a run-scoring hit up the middle. South’s fourth run crossed on a two-out wild pitch.

“We were looking for fastballs and he was putting them right there,” Larrimore said. “We were prepared for this. It’s definitely fun when you get in, get out and get things done.”

South’s final run was produced by DH Anthony Fox, who whipped an RBI-grounder into left field with one away in the last of the fifth inning. The rest was up to Joyce, who worked out of a difficult jam in the Hickory Ridge fourth. The guests had runners at second and third with two out when he bent a knee-buckling, 3-2 curveball across the outside corner to fan beefy Jeremiah Boyd.

“I was trying to pitch to contact, but the K’s kept coming,” Joyce said. “They’re a good team. If I miss my spots, they barrel it up. Against (Boyd), I was just trying to get it in the strike zone and make him swing.”

Instead, he delivered the kind of pitch post-season awards are made for.

“That was a very good corner pitch,” Nelson said. “He was under pressure, but stood his ground and got out of the inning. Me, him and the coach all had the same idea.”