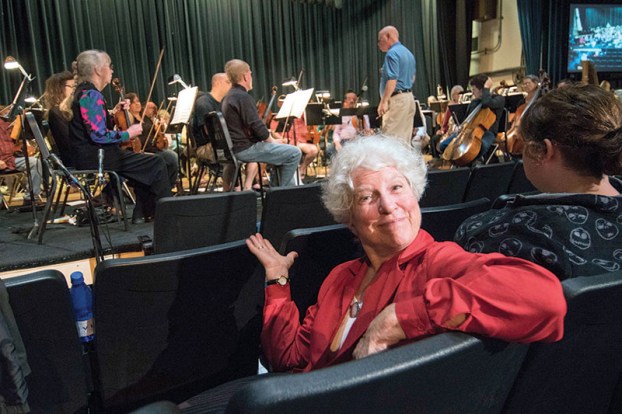 Here’s what Maestro David Hagy has to say about Linda Jones, executive director of Salisbury Symphony for the past 15 years.

Linda Jones came with no experience working with an orchestra before, but it is her natural life skills that not only convinced me she would be a success but have made her almost irreplaceable.

She is friendly to everyone even when challenged, and she still asks me how she can help me. When she says she’ll get something done, even if she’s unfamiliar with it, it gets done, and well. She is creative and a skilled artist in her own right, having appeared as on the Salisbury stage and done brilliantly. As a result, she understands the feelings artists go through when they perform. She treats our musicians, our volunteers, our board, our donors — and frankly everyone she meets — with respect.

She does 300 different activities a day, all of which contribute to the symphony in some way, and still is cheerful when I call that evening! She even visited my mom in the nursing home, and helped me cope with the challenges of day-to-day visitation as well as her eventual loss. She has become a remarkable colleague and a good friend. I will miss her “Hey boss!” (as if I were her boss!), and I hope she’ll be around as an adviser and friend in her retirement. I wish her the happiest of times!

Over the course of 15 years as executive director for the Salisbury Symphony, Linda Jones has probably answered her office phone thousands of times.

The first was from Rebecca Wiley, owner of Piedmont School of Music and Dance in Kannapolis.

“I’m doing the ‘Nutcracker’ and I want an orchestra. Can you do it?”

They could — and have for more than a decade now.

The second memorable call came from Cathy Wilkerson, then publisher of the Salisbury Post, in 2004.

“We’re having our newspaper’s centennial celebration and we want to have a symphony concert. Can you do it?”

They could — and Pops at the Post celebrates its 13th year next weekend.

“The phone rings,” Linda says, “and you never know.”

Come the end of June, someone else will be answering that phone, as Linda is retiring.

“I’m gonna miss that phone ringing,” she admits. “That’s where the adventure comes in.”

Linda is never one to shy away from adventure. She has a theater degree from the University of South Florida — and had no experience with a symphony when she took the job in Salisbury. She had been marketing director at Four Seasons Mall in Greensboro from 1985 to 1998.

Years before, she developed a special love for “1812 Overture.” She rode a bicycle to work in Florida, and was so hot and tired when she got home, she listened to the Tchaikovsky classic on headphones while she cooled off. She eventually decided that when she died, she wanted the piece played at her funeral.

Then she had a better idea.

Around age 50, she decided to have a gathering of dear friends — “everybody I loved” — who could celebrate with her BEFORE her funeral.

“Get me an orchestra,” she told and friend — and the friend did.

“It was a glorious party in October,” remembers Linda, who turns 70 in December. “It was a perfect, perfect day.”

She thought she’d never get that close to an orchestra again.

Fast forward to 2005, and Maestro David Hagy needed someone to ring the bell in First Presbyterian’s Bell Tower as part of the thrilling climax of “1812 Overture.”

“Guess who that was?” Linda asks. “Don’t you just love that story?”

Linda and David have developed a collegial relationship over the years (see David’s thoughts on page 4A).

“Once David says ‘no,’ I say, ‘Well, what if?’” Linda says. “He’s patient. He’s thorough. He’ll come around with an idea that’s better than what we started with. He is wonderful that way and he’s very, very creative. He cares about his musicians, and he is fair but firm.”

During rehearsals, Linda tends to sit on the floor, in the midst of all the musicians.

Why on earth would she do that?

“That’s where you feel it,” she says, grinning.

Since being in Salisbury, Linda has put her theater skills to use, appearing as Miss Daisy in “Driving Miss Daisy” at Lee Street theater, as well as in its production of “Calendar Girls.” That’s the delightful play in which a garden club’s “women of a certain age” pose nude — creatively covered by flowers, flower pots, and the like — to raise money to buy a sofa in a cancer ward.

Obviously, the fundraiser was wildly successful, and obviously, the play is a hoot. So is being naked on stage.

“Wait a minute!” Linda points out. “You don’t know that for a fact.”

Linda also appeared in the Piedmont Players Theatre production of “You Can’t Take It With You,” the same play she’d appeared in as a high school student, playing a mom.

“That was the first time I felt the audience in the palm of my hand,” she remembers. “That was a special play. I decided to audition again for the role of Penny, because I was now age appropriate, and I got to do the play again.”

Claudia Galup asked her to audition, she says, even though she was “too nice” for the part. But, after all, Linda is an actress.

She says she may take on more roles now.

She’ll stay in Salisbury with Buddy Farnan, her companion of more than 30 years, well known as a magician.

What’s the first thing she’s gonna do? Buy a six-pack — of symphony tickets. You mean she’ll still go to the symphony?

“Oh hell yes! Are you kidding?” she asks, that same grin re-emerging. “There are only five other communities in the country our size that have a symphony. That’s an amazing pat on the back to this community.

She’ll also continue to attend plays at Lee Street and Piedmont Players. She’ll enjoy taking long lunches and traveling, too, she says. She’ll visit her sons, Charles, who lives in Denver, and Stephen, who lives in Chicago with his wife and their three children.

“Not only do I have a list, but it’s alphabetized,” Linda says.

“I think of myself as a happy person,” Linda says. “I’ve been lucky.”

While the Salisbury Symphony hasn’t yet amassed the 100 years boasted by Cheerwine, the ensemble did hit a monumental milestone... read more