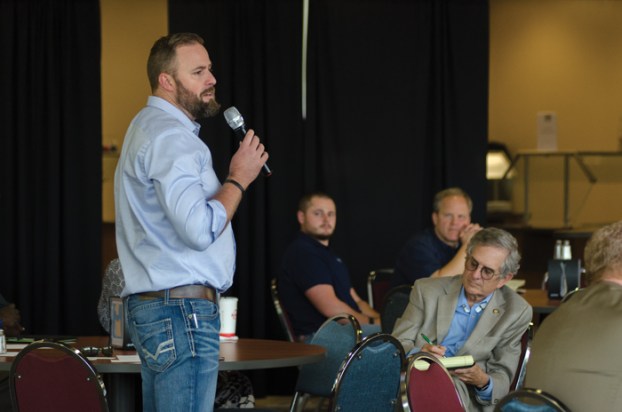 Chris Shelton, left, speaks for his table as councilman David Post takes notes at a meeting on issues surrounding a police shooting at Hood Theological Seminary in Salisbury on Wednesday. Kristi Craven/Salisbury Post

Repsher was one of about 20 people who attended a Wednesday meeting organized by Salisbury city officials to talk about the 2016 killing of Ferguson Laurent during the execution of a no-knock warrant. City staff and elected officials say they expect the release of a state report in the coming weeks with a decision about police conduct by District Attorney Brandy Cook.

The city has come under fire for its decision to hold meetings in advance of Cook’s decision and a statement made by Mayor Karen Alexander that civil or violent unrest could follow Cook’s decision. Alexander on Wednesday said the city wants to be prepared.

“You know, you have one set of people who are only looking at it from one perspective, and we need to be looking at it from multiple, and while it’s OK to be passionate about either side, we need to be respectful and deal with it in a way that’s not violent,” Alexander said. “There’s pain enough to go around on either side. Everyone is in pain about this — the officer, his family — they’ve been in pain since this happened.”

Several days ago, Alexander sent a letter to an association of local clergy that set the Wednesday meeting to discuss matters related to Laurent’s death.

Those who attended started by tossing around ideas about how to make general community improvements and ones specific to Laurent’s death.

After a number of people spoke, Repsher and Salisbury resident P.J. Ricks shared an exchange that’s ongoing between a primarily black and primarily white church in the city. The churches are First Presbyterian Church downtown and Crown in Glory Lutheran Church on East Bank Street. Repsher, a member of First Presbyterian, said the exchange involves meeting and eating a meal once per month at one of the two churches.

“We started out sort of in safe territory and just sort of meeting as groups,” Repsher said. “Recognizing that didn’t get the job done, we began meeting in between our monthly meetings with individuals. You know, it’s one thing to stereotype a group, but once you meet someone and have a really personal conversation, get to know them, the stereotypes tend to disappear.”

The exchange is known as Conversations in Faith.

A member of Crown in Glory, Ricks said the exchange mirrors the desires people spoke about Wednesday. She said such exchanges don’t have to occur only between churches.

Similarly, others said churches may not be the only answer to Salisbury’s problems.

Repsher said efforts to deal with community issues, including Laurent’s death, need to involve other facets of the community. But significant work can be accomplished among people who attend church services or are religious, he said.

“If the churches can’t be part of the solution, then you might ask yourself if they’re part of the problem,” Repsher said after Wednesday’s meeting. “So that’s a first place to start.”

“We need a process,” she said after Wednesday’s meeting. “I don’t mean to minimize (Laurent’s death) at all, but we’ve had too many deaths. His included. So what are we going to do about it? How are we going to move Salisbury forward?”

If a number of churches adopted exchange programs, Ricks said, locals would be kinder and more civil to each other. People of different backgrounds and different races would better understand one another, she said.

A number of others said it’s important to spend time with people of other races and backgrounds. Regularly having lunch with someone of another race was one example mentioned.

Near the meeting’s conclusion, City Councilman David Post tried to summarize statements made.

“Somehow, we’ve got to find a way to stir the sand in the sandbox a little bit,” Post said.

Repsher said that single events, such as Laurent’s death, often do not fundamentally change a community, but they can alter smaller things, such as individual behavior.

Other suggestions included ensuring the city has an action plan for what occurs after the SBI report is made public, re-establishing the city’s credible voice in local communities and city officials speaking with Rowan County commissioners in advance of the SBI report’s release.