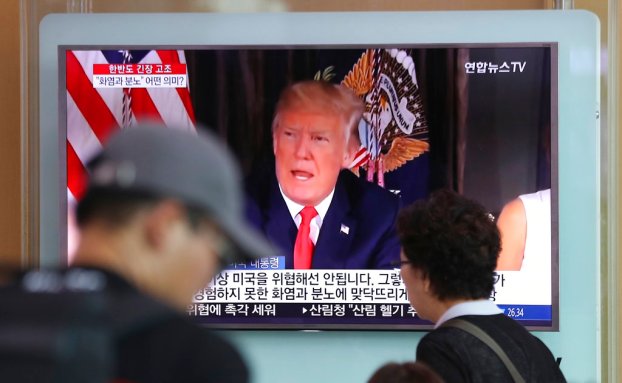 People walk by a TV screen showing a local news program reporting with an image of U.S. President Donald Trump at the Seoul Train Station in Seoul, South Korea, Wednesday, Aug. 9, 2017. North Korea and the United States traded escalating threats, with President Donald Trump threatening Pyongyang "with fire and fury like the world has never seen" and the North's military claiming Wednesday it was examining its plans for attacking Guam. (AP Photo/Lee Jin-man)

I respectfully request the president’s cabinet members inform him of the difference between diplomacy and its opposite meaning.

Diplomacy: The conduct by government officials of negotiations and other relations between nations. The art of conducting such negotiations. Skill in managing negotiations, handling people, etc., so that there is no ill will (aka tact).

Apparently, the president has chosen the opposite of diplomacy — that is, tactlessness, ignorance, bad manners, impoliteness, rudeness and I might add, confrontational. His being a narcissist and egotist and a pathological liar doesn’t help matters either.

The way out of the current darkening climate facing this nation is to take a bold step and impeach our dangerously unhinged President Trump and replace him with a rational public servant before we find ourselves in a catastrophic scenario that could culminate in a life-ending nuclear conflagration where there are no winners.

Diplomacy is worth a try, Mr. President, to “Make America Great,” because your current efforts might Make America Extinct. The situation is that serious!

Clyde, Time Was: Define the sacred and protect it

By Clyde Special to the Salisbury Post Time was, there were things and places sacred. If ever you visited cathedrals... read more