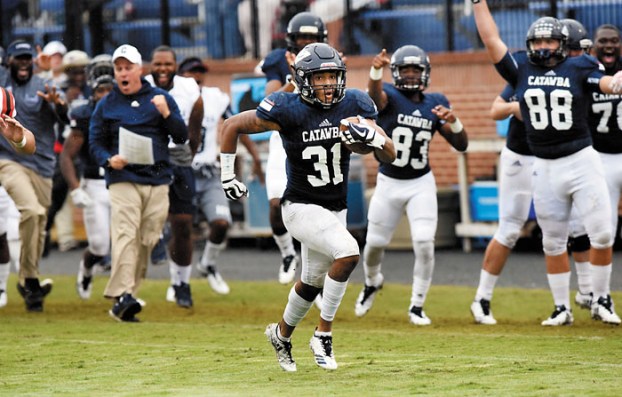 Wayne Hinshaw/for the Salisbury Post ... Catawba’s Trey Murray (31) scores a touchdown after picking up a teammate’s fumble during a punt return. Wayne Hinshaw/for the Salisbury Post …
Catawba’s Eamon Smart (8) runs behind the blocking of offensive guard Quinzavious Sands (53) during Saturday’s game against North Greenville at Shuford Stadium. Smart and Sands later teamed up for the winning touchdown in overtime.

SALISBURY — It was overtime, second-and-2 at the North Greenville 17. Catawba back Eamon Smart saw his lead blocker and the right side of the line creating a crease, and he knew he was going to get the necessary yards to move the chains.

Smart also saw a North Greenville linebacker hurrying to plug the gap, but then that linebacker simply vanished, forcibly evicted from the play by Catawba pulling guard Quinzavious Sands, a 280-pound road grader who had plowed from left to right and was ready for overtime to be over.

“Our lineman from the backside cleared out that linebacker,” Smart said with the smile of a winner. “After that, it was easy. Smooth sailing.”

The record book will show Smart’s touchdown jaunt through a gaping breach lifted Catawba to a 26-20 overtime win against the Crusaders (3-3), but it still was a difficult Saturday for the Indians (5-1). They owned the first half but got slapped silly after intermission. Leading 20-0 at one point, Catawba was fortunate to exit Shuford Stadium with a non-conference victory.

“We played inspired football in the first half,” Catawba head coach Curtis Walker said. “But I’m disappointed in our second half. We made so many mistakes  that we put ourselves in a tough position where we should never have been.”

Trey Evans, a senior inside linebacker who made a mind-blowing interception, pounced on a loose ball and held his ground for eight tackles, didn’t apologize for the rocky road Catawba traveled to achieve a positive bottom line.

“North Greenville was one of the toughest teams we’ve played,” Evans said. “Yes, we played a bad second half, but when our backs were to the wall in overtime, we still got the win. When we needed it most, we got it.”

Weather became a factor. That wasn’t expected. Walker had consulted the forecast. He saw a 20 percent chance of rain for the first quarter, but with any precipitation clearing out after that. But mist became drizzle and drizzle became light rain and light rain became steady rain. It was wet. It’s not like players were slipping and sliding, but soggy balls affected snaps, throws and catches. Especially catches. Catawba bungled routine interceptions  and dropped tosses by QB Patrick O’Brien (16-for-28, 175 yards) that would’ve meant one more touchdown and several third-down conversions. Catawba’s best receivers — Sam Mobley and Keyon West — bobbled balls they normally grab with their eyes closed.

When a North Greenville DB gambled unsuccessfully for a pick, Mobley had a 22-yard catch down the right sideline. O’Brien  hit West on a slant pattern for a 17-yard TD and a 7-0 lead at the outset of the second quarter.

North Greenville’s reliable kicker Matt Gravely missed a 29-yard field goal, and Catawba promptly pushed 80 yards to score, with O’Brien showing surprising speed on a wet field and with Kenyatta Greene darting for nice gains. O’Brien’s 1-yard TD run — he feinted outside, then cut back inside like a running back — made it 13-0 with 4:46 left in the second quarter. Lee Brackman’s PAT try was blocked.

A minute later, Catawba caught a huge break. Mobley fielded a punt at the Catawba 29, made a couple of would-be tacklers miss and maneuvered toward the Catawba sideline, with a wall forming. It looked like he might go the distance, but Adrian McGee, a reserve safety hit him and knocked the ball loose at the North Greenville 41. It hopped straight to Catawba safety Trey Murray, who romped to the end zone for a 20-0 lead.

“I really thought Sam was going to score,” Murray said. “I was looking to crack back and make a block for him when their guy came in and stripped the ball. Then the ball pops right to me. Jeremy (Addison) gave me a block, and I was on my way.”

Catawba shut out North Greenville until the final play of the first half. That’s when Gravely connected for a 47-yard field goal. Those three points didn’t appear to mean much at the time, but they changed momentum.

Catawba had  every chance to send North Greenville fans home in the third quarter. T.J. Lowe-Foston’s interception on the first snap of the second half gave Catawba the ball at North Greenville 30, but the Indians failed to cash in.

“I was able to make a few plays today when the team really needed one,” Kitchens said. “But we just kind of fell apart in the second half.”

Kitchens’ recovery led to no points, and then North Greenville fought back. The Crusaders had a devastating false start penalty when they had fourth-and-goal at the 2, but Waverly booted his second field goal, and Catawba’s lead was trimmed to 20-6.

O’Brien threw his only pick on the next Catawba series, but a sack by Kitchens saved the Indians and forced a North Greenville punt. That punt backed the Indians up to the Catawba 3. The offensive line and Smart battled out of that hole and used up minutes, but North Greenville got the ball back with 5:43 left to play. That’s when the Crusaders sauntered 69 yards in six plays for the tying TD and PAT.

A third-down drop forced Berry to punt again for the Indians as the clock slid under three minutes. With 2:50 left, North Greenville came very close to a potential winning touchdown. Quarterback Will Hunter spotted Robbie Brown running free, 10 yards behind the Catawba defense, but Brown couldn’t haul in a well-thrown aerial. That was a bullet dodged.

“I told our defensive backs, ‘Be glad that it’s raining,'” Evans said.

Catawba held the Crusaders and forced a punt. A 20-yard dash by O’Brien put the Indians in position to break the 20-all deadlock with a field goal. Lee Brackman’s try from 43 yards had plenty of distance, but the ball stayed just right of the posts.

Catawba won the coin toss at the start of overtime, and North Greenville had the ball at the Catawba 25. Evans made the tackle for a loss that gave the Indians a chance to make a stop, and they did. On fourth down from the Catawba 6, Gravely was asked to make a point-blank field goal, but the Crusaders failed to execute on the snap-and-hold part of the equation.  Evans fell on the ball for the Indians to end the possession.

Catawba only needed a field goal for the win, but on the Indians’ first snap of OT, Smart barreled for 8 yards. Then, on Catawba’s second play, Smart, with a lot of help from Sands, headed for the end zone.

“We want to play complete games, four quarters,” Walker said. “We failed to do that today, but I did like the way we finished. We stopped them, and then we we went out and got six.”

Next Saturday will bring Homecoming and a 1:30 p.m. visit from rival Wingate.