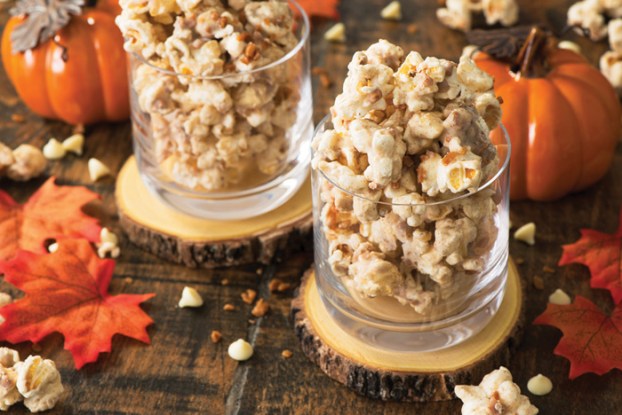 October is a busy month for national days of this or that. The entire month is National Popcorn Month, and it comes at a good time.

Halloween, fall outdoor fun and Christmas are all coming up. Popcorn, if you can find it unsalted and unbuttered, is a healthy snack, and there’s tons of ways to dress it up, savory to sweet.

According to the Popcorn Board, Americans consume 13 billion quarts of popcorn each year. The average American eats about 42 quarts.

Long before techno gizmos and gadgets, people were fascinated with popcorn’s ability to transform from seed to snack. In recent years, popcorn was heralded for its convenience and affordability. Consumers today appreciate popcorn’s farm-to-table simplicity and healthy halo. Popcorn has always been non-GMO, gluten-free, naturally low in fat and calories, sugar-free and contains no artificial additives or preservatives.

It is believed that the first use of wild and early cultivated corn was popping. The oldest ears of popcorn were discovered in west central New Mexico in 1948 and 1950. Ranging from smaller than a penny to about 2 inches, the oldest ears are about 4,000 years old.

Popcorn was once a popular breakfast food. Ahead of its time and very likely a role model for breakfast cereals to come, popcorn was eaten just as we eat cereal today during the late 19th and early 20th centuries.

Long before the corn flake, Ella Kellogg enjoyed her popcorn ground with milk or cream. Although she discouraged snacking, she urged others to eat popcorn at meals, calling it “an excellent food.” Ella understood, as her husband did, that popcorn was a whole grain. John Harvey Kellogg praised popcorn as being “easily digestible and to the highest degree wholesome, presenting the grain in its entirety, and hence superior to many denatured breakfast foods which are found in the market.”

Popcorn fascinated and delighted the young, becoming increasingly popular around Halloween, Thanksgiving, Easter and especially Christmas. Because of its low cost, popcorn was ideal for Christmas decorations, food and gift giving.

In the late 19th and early 20th centuries, popcorn balls were one of the most popular confections, often given as gifts. Victorian families decorated fireplace mantels, doorways and Christmas trees with ornate ornaments made from popcorn balls. By the turn of the century, most cookbooks featured at least one recipe.

Combine marshmallow cream and peanut butter in a large bowl; mix until smooth. Stir in popcorn and candy corn and mix until coated evenly.

Drop by heaping spoonfuls on wax paper or non-stick surface and allow to cool. Store in airtight container.

In microwave-safe bowl, combine chocolate, olive oil and pumpkin pie spice; microwave on Medium for 2 to 3 minutes or until melted and smooth, stirring after each minute.

Let cool; refrigerate for 1 to 2 hours or until set. Break into chunks for serving.

Tip: Homemade pumpkin pie spice can be made by combining 3 parts ground cinnamon with 1 part each ground nutmeg and ginger, and a dash of allspice and ground cloves.
Honey Matcha Popcorn
12 cups unsalted, unbuttered popped popcorn

Bake, stirring occasionally, for 25 to 30 minutes or until popcorn is dry. Let cool completely before serving.

Tip: Matcha powder can be found in the tea and coffee aisle at the supermarket.