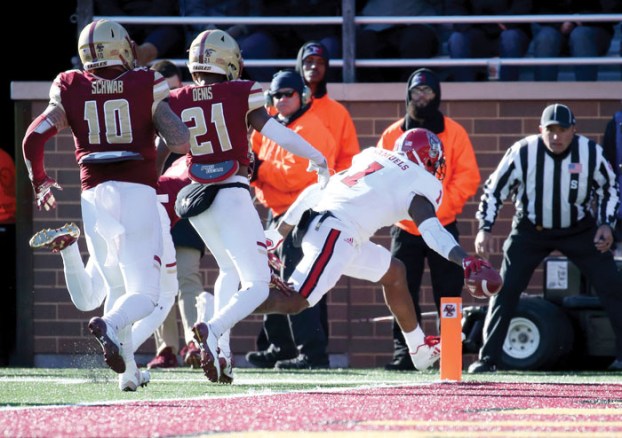 AP Photo/Mary Schwalm N.C. State’s Jaylen Samuels (1) reaches across the pylon for a touchdown, ahead of Boston College defenders Ty Schwab (10) and Lukas Denis (21) during the first half of Saturday’s game in Boston. The Wolfpack won, 17-14.

BOSTON (AP) — Nyheim Hines was feeling much better on Saturday after injuring his right ankle two weeks ago.

The rest of his teammates are feeling pretty good now, too, with a chance for a memorable conference record.

Hines had a 50-yard scoring run midway through the fourth quarter, and North Carolina State rebounded from two tough losses against high-ranked teams with a 17-14 victory over Boston College.

Jaylen Samuels added an 8-yard scoring run for the Wolfpack (7-3, 5-1 Atlantic Coast Conference). They had lost to third-ranked Notre Dame and No. 4 Clemson, respectively, the previous two weeks.

With wins in their last two ACC games, they have a chance to reach a program first.

“It’s always nice to get a winning taste back,” North Carolina State coach Dave Doeren said. “Our goal at the end of the week was to try to get to seven wins in the ACC, which has never been done. It’s a great goal, a lofty goal.”

“It was hard coming up here in this cold weather,” Samuels said of a game-time temperature of 27 degrees. “We knew it was going to be tough to play these guys, they’re tough, physical.”

Hines injured his ankle early in the Notre Dame game and was limited in the loss to Clemson.

“Not only did we have him, but we had him back healthy,” said Doeren, who called him a “difference maker.”

AJ Dillon carried 36 times for 196 yards, going over 1,000 yards to set a school-freshman record for rushing yards for the Eagles (5-5, 3-4), who had their three-game winning streak stopped.

Thadd Smith had a 12-yard TD run for the Eagles, who lost starting quarterback Anthony Brown with a right leg injury early in the second quarter after he crumpled to the ground in pain when he was untouched on a cut. His right knee appeared to buckle.

“It didn’t look good,” BC coach Steve Addazio said. “What does that mean? Obviously he’s going to have some testing done to try to figure out exactly what he did.”

BC led 14-10 after Smith’s run, but Hines went down the right sideline for the game-winning score.

The Eagles had a chance to tie it with just under five minutes to play, but a bad snap spoiled their chance for a 39-yard field goal attempt. Holder Jeff Smith rolled out and fired an incomplete pass near the goal line.

BC had linebacker Kyle Bletzer recovered a lateral from Samuels at the Wolfpack 23 before Smith scored on a jet-sweep four plays later.

BC had moved ahead on Dillon’s 66-yard score, but the Wolfpack marched 87 yards in 11 plays on the ensuing drive to tie it on Samuels’ run.

N.C. State: The Wolfpack have reached five conference wins for the first time in seven seasons. With very winnable games in their next two at Wake Forest and at home against North Carolina, they have a chance for a very nice season and a quality bowl.

BC: The Eagles will likely have to find a way to overcome the loss of Brown to become bowl-eligible for the second straight season. . They failed to post their first four-game winning streak under fifth-year coach Steve Addazio, the first since 2010.

Bambard made all three – though it didn’t count – and made the fourth when it did.

BC: The road team against Connecticut next Saturday night, though the game is being played about 3 ½ miles away at Fenway Park, home of the Boston Red Sox.

A rout: Hurricanes all over Notre Dame in showdown

MIAMI GARDENS, Fla. (AP) — Miami is getting championship rings when this season is over. Maybe, just maybe, the biggest... read more